Russian military intervention in Syria has expanded considerably over the past month and may accelerate further if the destruction of Metrojet Flight 9628 over Sinai is proved to be the work of Islamic State (IS). 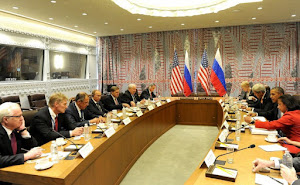 Russian and American representatives meet to discuss the situation in Syria on September 29, 2015

The US-led coalition against IS in Syria is meanwhile steadily losing its active members, even as the US escalates its bombing campaign and declares a greater willingness to deploy Special Forces units inside Syria. While the UK prevaricates on its involvement within Syria, Israel has launched new attacks on Hezbollah there and Turkey pursues its own interests against IS and Kurdish factions alike. The risks of accidental escalation between these disparate actors is rising as the complexity of the war grows.

The October briefing reported a number of developments in the war in Syria, including the Russian intervention, a likely extension of the US-led air war and a change in US strategy towards arming opposition groups in preference to training them. Perhaps most significantly there were revised US intelligence estimates indicating that Islamic State (IS) was gaining new recruits in Syria and Iraq at a rate more than compensating for the heavy losses caused by the air strikes in both countries.

This briefing provides an updated analysis based on developments since mid-October as they apply to Syria in particular. Its main focus is on two developments early in November. One was the criticism of UK policy towards Syria by the Chief of the Defence Staff, General Sir Nicholas Houghton, who argued that the UK was letting its allies down by not joining in the air strikes against IS in Syria. The second was the destruction on 31 October of a Russian charter airliner shortly after it began a flight from Sharm el-Sheikh in southern Sinai to St Petersburg, killing all 224 passengers and crew.

The comments of General Houghton caused some concern as they were paralleled by a more controversial expression of opposition to the views of the new Labour Party Leader, Jeremy Corbyn, over the Trident nuclear weapons system. There has been concern that General Houghton has strayed too far into the political dimension with his Trident-related comments, but this has been less the case in relation to his views on attacking Syria in that there is already cross-party opposition to that policy.

What General Houghton’s comments have done is to focus attention on the nature of the air war in Syria which has involved nine coalition partners: Saudi Arabia, Bahrain, the United Arab Emirates (UAE), Morocco, Jordan, Canada and the United States plus, since September, Australia and France. Although the US has carried out around 95% of the attacks, the presence of a range of other countries has added weight to the idea of a united, broadly based and multinational coalition opposing IS in Syria.

The reality is actually quite different as six of the nine coalition partners have ceased undertaking air strikes in the past nine months, although some may still be involved in support operations. Bahrain ceased air strike operations nine months ago, the UAE and Morocco eight months ago, Jordan three months ago and Saudi Arabia just two months ago. These countries are all now more actively involved in their war in Yemen. The fifth country, Canada, under new Prime Minister Justin Trudeau, is withdrawing from all air strike operations over Syria and Iraq.

Of the remaining coalition partners, France is reported to have carried out just two air strikes over Syria with all of the rest of the 270 attacks being over Iraq. Finally, Australia’s air force has undertaken 434 air strikes but up to 2 October had only undertaken two attacks in Syria before pausing in its operations when Russia started its intervention. Belgium and Denmark also pulled out their fighter-bombers from operations over Iraq in July and September respectively.

To all intents and purposes, the air war that has evolved over Syria is now a US operation with minimal involvement from western allies and no operations being undertaken by regional allies. There certainly is an increased intensity of air strikes against IS in Syria but this is entirely down to increased US operations, especially from the Turkish base at Incirlik, less than 30 minutes flight from IS-controlled territory in northern Syria. It is thus fast becoming an American war and this may explain General Houghton’s concern, bearing in mind that it makes it far easier for IS propagandists to portray their role as being the guardians of Islam under persistent attack by the “far enemy” of the United States and its western allies.

Meanwhile, Russian air operations continue although at a lower level than those of the United States. The great majority continue to be against the opponents of the Assad regime and are serving to ensure that those areas of north west Syria that are strongly supportive of the regime are secure from opponents. There are occasional Russian air strikes against IS targets and, while these are of little military consequence, their political significance could be considerable following the destruction of the Russian airliner over Sinai. More