As the U.S. continues to refuse an independent probe, Doctors Without Borders (MSF) on Thursday released its own damning report of the American military's bombing of the medical charity's Kunduz, Afghanistan hospital last month—describing patients burning to death in their beds and people shot by a circling plane while attempting to flee. 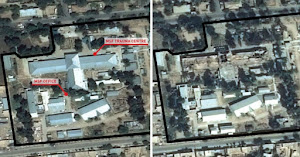 The image on the left shows the Doctors Without Borders hospital in Kunduz, Afghanistan on June 21, 2015, before the U.S. military bombing. The image on the right shows the facility on October 8, 2015, following the attack. (Photos from report)

The review (pdf), the first installment of an ongoing investigation, gives a harrowing, chronological account of the bombing, which took place while at least 105 patients were admitted, surgeries were ongoing, and people—including children—were immobilized in the intensive care unit. The report confirms that 149 MSF staff and one International Committee of the Red Cross delegate were in the hospital compound during the time of the attack.

What's more, the investigation finds that MSF was fully in control of the hospital at the time of the bombing, and its rules were in effect—including prohibitions against weapons. In addition, there was no combat “from or in the direct vicinity” of the hospital before the bombings.

“Some public reports are circulating that the attack on our hospital could be justified because we were treating Taliban,” said Christopher Stokes, MSF general director, in a statement accompanying the report. “Wounded combatants are patients under international law, and must be free from attack and treated without discrimination. Medical staff should never be punished or attacked for providing treatment to wounded combatants.”

“The view from inside the hospital is that this attack was conducted with a purpose to kill and destroy,” Stokes continued. “But we don’t know why. We neither have the view from the cockpit, nor the knowledge of what happened within the U.S. and Afghan military chains of command.”

MSF based its findings on 60 debriefings with its national and international staff employed at the trauma center, email and telephone records, and before and after photographs of the hospital. The organization also reviewed internal and publicly-available information about the bombing that killed 13 staff members, 10 patients, and 7 people whose bodies were unrecognizable.

Due to an escalation in fighting, MSF on September 29 re-confirmed its GPS coordinates to the U.S. Department of Defense and Afghan Ministry of Interior and Defense and U.S. Army in Kabul—all of whom confirmed receipt, the report states. On Friday, October 2, before the bombings took place, MSF even placed its organizational flags on the roof of the hospital, to ensure its identity would not be mistaken.

But at roughly 2:00 AM, the U.S. military unleashed a horrific bombing on the hospital, which lasted at least an hour. During this time, MSF made at least 17 calls to Afghan, U.S., and United Nations officials in attempt to stop the bombings, according to a log displayed in the report.

The first room hit was the ICU, where staff were caring for patients, some of whom were on ventilators, and at least two of whom were children. “MSF staff were attending to these critical patients in the ICU at the time of the attack and were directly killed in the first airstrikes or in the fire that subsequently engulfed the building,” the report states. “Immobile patients in the ICU burned in their beds.”

The strikes then moved to the main hospital building, destroying the emergency room, mental health department, operating theaters, and other areas—killing two patients while they were undergoing surgery. MSF staff described a litany of horrors: amputations, fully or partially severed limbs, and people “running while on fire and then falling unconscious on the ground.”

The report states some were “shot by the circling AC-130 gunship while fleeing the burning building.”

In the immediate aftermath of the bombing, surviving MSF staff fought for the lives of their colleagues and patients, inserting chest drains, halting severe bleeding, and treating shock—with at least two MSF staff dying on the operating table.

MSF's account shines light on an attack whose details have been murky, with the Pentagon changing its story at least four times, including initially denying responsibility. The U.S. and Afghan governments so far refused MSF's repeated calls for an independent investigation by the International Humanitarian Fact Finding Commission (IHFFC), which was established in 1991 under the Geneva Conventions. In addition to releasing Thursday's report to the public, MSF has also submitted it to the IHFFC. More