In a cover story and article 14 years ago about the emergent disruption of utilities, The Economist’s Vijay Vaitheeswaran coined the umbrella term “micropower” to mean sources of electricity that are relatively small, modular, mass-producible, quick-to-deploy, and hence rapidly scalable—the opposite of cathedral-like power plants that cost billions of dollars and take about a decade to license and build.

His term combined two kinds of micropower: renewables other than big hydroelectric dams, and cogeneration of electricity together with useful heat in factories or buildings (also known as combined-heat-and-power, or CHP).

Thanks to Bloomberg New Energy Finance, which tracks investments and generating capacity, and the global expert network REN21.net, which tracks capacity and (where known) electrical output, global progress in renewables has become rather transparent. Starting in 2005 and updated with a fifth edition in July 2014, RMI’s Micropower Database added a third source: industry sales data for cogeneration equipment. Tracking renewables, minus big hydro, plus cogeneration, this database documents the global progress of distributed, rapidly scalable, and (as we’ll see) no- or low-carbon generators.

The update’s most astonishing finding: micropower now produces about one-fourth of the world’s total electricity (Fig. 1). 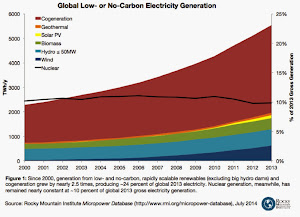 Operating modern renewables is essentially carbon-free, except for minor subsets fueled by biomass grown using unsustainable practices that gradually deplete soil carbon.[2] Of the estimated 3–5 percent of cogeneration fueled by biomass, most is in the forest products industry, whose biomass wastes produce most of its electricity and process heat.

Cogeneration in refineries often burns waste fuels that would otherwise be uselessly flared. Similarly, much industrial cogeneration harnesses waste heat previously thrown away. Where extra fuel is burned to make electricity as well as heat, typically far less is burned than when making them separately. If cogeneration also produces cooling and other services, it can convert as much as 93 percent of fuel energy into useful work, both in industry and in buildings. Moreover, the natural gas that fuels most cogeneration is only about half as carbon-intensive as the coal-fired power-only generation it often displaces.[3]

The other half came from power-only plants, burning mainly coal. Those plants cost more to build, and often more just to run, than their competitors, so their orders are fading, their operations are dwindling, and over decades, they’ll retire in favor of cleaner, cheaper substitutes—both micropower and efficient use.

Far from recognizing that they’re being rapidly overtaken, many advocates of coal or nuclear power stations don’t even acknowledge micropower as an important competitor—even as it grabs their markets and destroys their sales. In 2009, a senior strategic planner for a major nuclear vendor told me micropower was trivial—having failed to find it in official databases of utility-owned central power stations, without understanding the difference. And even at minor market share, micropower can have major effects. The solar 4.7 percent of Germany’s 2013 generation destroyed the incumbent utilities’ business model and wiped a half-trillion Euros off their market cap. More