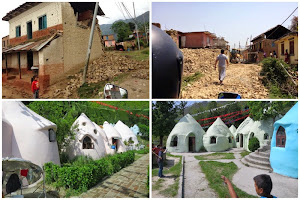 Hesperia, Calif., May 5, 2015 — Cal-Earth Institute today announced they received confirmation that the Superadobe/Earthbag orphanage project built for the Pegasus Children’s Project in the northern Khathmandu valley in Nepal survived the 7.6 magnitude earthquake on 25 April 2015, and the structures are all still standing.

A UK organization, Small Earth, built over 40 domes in 2006 for the Pegasus Children’s Project in Nepal, which is home to over 90 children and their caretakers, all of who are confirmed safe after the earthquake. Trained by a Cal-Earth alumni in 2005, Small Earth’s founder, Julian Faulkner, shared the news: “The domes have come through relatively unscathed with just surface cracking to the plasterwork… in the village below the site 15 houses have collapsed and many others are badly damaged with all the villagers now sleeping under tarpaulins in the fields.”

Faulkner stated the superficial damage to the buildings is a “testament to the quality of training we received that has enabled us to further develop the technology for use in climates as diverse as the temperate UK, the monsoon-drenched Himalayas and the African savannah.” Pegasus is raising funds to rebuild a brick structure that was destroyed during the quake, but feel validated in their choice to build earthbag domes to withstand the extreme conditions.

The Cal-Earth organization is dedicated to addressing the pressing needs of all the Earth’s homeless population and displaced people. The global housing shortage currently includes some 20-40 million refugees and displaced persons, and hundreds of millions more who live in substandard or slum housing. With compounding environmental challenges and the acceleration of natural and man-made disasters, this shortage will only become more severe in the coming decades. Cal-Earth believes the time to act is now, in order to ensure that everyone has a safe and sustainable place to live.

Cal-Earth is responding to the growing need to educate people in the face of compounding environmental challenges and the acceleration of natural and man-made disasters. On May 11, 2015, Cal-Earth will launch its first online class for download and streaming: Introduction to Superadobe. Cal-Earth is working toward raising addition funding to create more online content so that anyone, from anywhere, will be able to learn sustainable earth architecture in person or online. More

Cal-Earth, the California Institute of Earth Art and Architecture, is a 501 (c)(3) nonprofit organization committed to providing solutions to the human need for shelter through research, development, and education in earth architecture. Cal-Earth envisions a world in which every person is empowered to build a safe and sustainable home with their own hands, using the earth under their feet. Currently, Cal-Earth reaches over 1.5 million through worldwide outreach and social media, in addition to more than 1,500 visitors who come to the Hesperia site annually for workshops and tours.