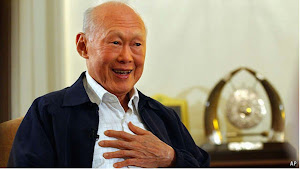 Lee Kuan Yew – The wise man of the East

IF YOU seek his monument: look around Singapore. Prosperous, orderly, clean, efficient and honestly governed, it is not the work of Lee Kuan Yew alone. But even his severest critics would agree that Mr Lee, who died early on March 23rd (Singapore time) at the age of 91, played an enormous part. Singapore’s leader from before “self-government” from Britain in 1959, he was prime minister until 1990, and retired in stages, leaving the cabinet only in 2011, and remaining a member of parliament until his death. Under him Singapore, with no natural resources, has become one of the world’s richest countries. Many admirers look to it as a model, and Mr Lee as a sage. He did indeed have much to teach the world; but some, especially in China, draw the wrong lesson: that authoritarianism works.

Part of Mr Lee’s influence stemmed from his role as a clear-eyed, blunt-speaking geostrategist. He was an astute observer of the defining contest of our era—China’s emergence and how America reacts to it. He was also a respected interpreter of each to the other, and an important voice, with unique access in both countries, arguing for continued American engagement in Asia and for Chinese tolerance of it.

His international status, however, derived from his achievements at home. He got many things right, especially in his choice of economic managers. They kept government small, the economy open and regulation simple, transparent and effective. Singapore often heads the World Bank’s “ease of doing business” rankings. It has deftly exploited those advantages that made it a successful entrepot as early the 14th century: a fine natural harbour and strategic position on the Malacca Strait, through which an estimated 40% or world maritime trade now passes. Foreign investment has poured in.

Pyongyang with broadband
Political stability and social order were part of the attraction. With a big ethnic-Chinese majority but sizeable Malay and Indian minorities, Singapore suffered race riots in the 1960s. Since then ethnic harmony has been preserved: by quotas in public housing that enforce integration; by tight restrictions on inflammatory speech; and by harsh penalties for lawbreaking (including both corporal and capital punishment). Conservative policies have been accompanied by strict social control. Strikes and other forms of protest have been extremely rare. Social policies are illiberal—homosexual acts, for example, remain illegal.

Part of Mr Lee’s influence stemmed from his role as a clear-eyed, blunt-speaking geostrategist.

Throughout, Mr Lee’s own People’s Action Party (PAP) has had a vice-like grip on power. The political system is based on the Westminster model inherited from Britain, but subtly modified to prevent the emergence of a serious opposition party. The mainstream press was tamed. Constituency boundaries are manipulated, and the introduction of group constituencies, ostensibly to ensure minority representation in parliament, is a further hurdle for small opposition parties. It also magnifies the distortions of a first-past-the-post system. In the most recent general election in 2011, the PAP won 60% of the votes, but more than 90% of the seats. Mr Lee and other leaders have also used defamation suits to defend their reputations. Opposition leaders have found themselves bankrupt.

Critics mock Singapore for being like North Korea or as “Disneyland with the death penalty”, as William Gibson described it in 1993. However, Mr Lee’s defenders argue that the restrictions are a small price to pay for stability and prosperity. GDP figures do not lie: Mr Lee’s policies have worked. Singapore is a thriving city-state. Unlike North Korea or Disneyland, it offers a real challenge to the liberal notion that growth, prosperity and freedom should and do go together.

China’s leaders, especially, are fascinated by Singapore’s style of one-party rule. They see flaws in “Western-style democracy”: its short-termism; its disregard for non-voters such as children and foreigners; and its habit of throwing up unqualified leaders. Mr Lee’s “meritocracy” promises a solution.

But four peculiarities of Singapore make it look like an anomaly. First is its size. It is a city with a foreign policy, which means it has a cohesion that vast, diverse countries cannot match. Second, this cohesion is reinforced by the turbulent circumstances of its birth. After a painful divorce from Malaysia in 1965, the government has never let Singaporeans forget that a Chinese-majority island, surrounded by Muslim-majority Indonesia and Malaysia, would always be vulnerable. Geography is third. Singapore has flourished in part because of the failings of the rest of its region. Rather as Hong Kong’s prosperity was based on being Chinese but not entirely part of China, so Singapore is in South-East Asia, but not of it.

Only one Lee Kuan Yew
However, the most important reason for Singapore’s singular experience is Mr Lee himself. Incorruptible himself, he kept government unusually clean. He ensured that Singapore pays its ministers and civil servants high salaries. Under today’s prime minister, his son Lee Hsien Loong, the bureaucracy has remained orderly and clean. Unlike many other independence leaders, Mr Lee designed a system to outlast him. Singapore’s government claims it has faced enough electoral competition to keep it honest but not so much that there was a high risk of losing power. So it has been able to eschew populism and take decisions in the country’s long-term interests.

But in most countries, probity requires checks, balances and an opposition that is not always condemned as unpatriotic. In China, for example, Xi Jinping, two years into an anti-corruption campaign, shows no sign of winning the battle. Across much of the developing world, those in opposition are treated as traitors whether their criticisms make sense or not.

Even in Singapore the model may not outlast its creator for long. Singaporeans are having few children and ageing fast, so the government faces demands for more generous social-welfare provisions. And growth has become dependent on high levels of immigration, angering natives who feel the influx is suppressing their wages and making it impossible to get a seat on the tube. That balance between competition and inevitable re-election is shifting uncomfortably. The Singapore model may prove unsustainable even in Singapore. More