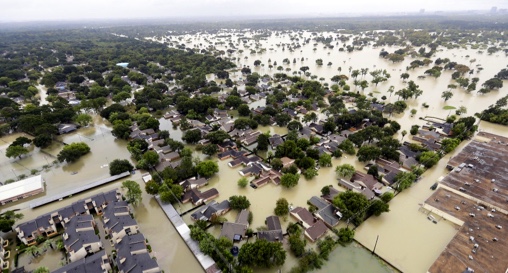 Hurricane Harvey was the worst flood in Houston’s history. Scientists and citizens are still piecing together why it was so bad, but it’s becoming clear that a lot of the damage comes down to how people have built America’s fourth-largest city.

You can see the problem from your car. Houston is a sprawling web of strip malls and 10-lane freeways.

Hydrologist Jeff East stands under one of those freeways, beneath an overpass and above the east fork of the San Jacinto River. The river is more like a trickling stream, 20 feet below. But East points to a line of seeds and debris in the grass by the highway. “Actually there’s a high water mark over here,” he says.

Debris left at the high-water mark is like a bathtub ring around Harris County. Along with gauges in the San Jacinto River, it shows flood levels never seen before. “This is the highest that it’s been since we’ve been gauging the site since the 1940s,” East says. https://goo.gl/RSVi1u