Think of the new “caliphate” of the Islamic State, formerly the Islamic State in Iraq and Syria (ISIS), as George W. Bush and Dick Cheney's gift to the world (with a helping hand from the Saudis and other financiers of extremism in the Persian Gulf). How strange that they get so little credit for its rise, for the fact that the outlines of the Middle East, as set up by Europe’s colonial powers in the wake of World War I, are being swept aside in a tide of blood. 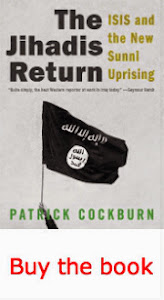 Had George and Dick not decided on their “cakewalk” in Iraq, had they not raised the specter of nuclear destruction and claimed that Saddam Hussein’s regime was somehow linked to al-Qaeda and so to the 9/11 attacks, had they not sent tens of thousands of American troops into a burning, looted Baghdad (“stuff happens”), disbanded the Iraqi army, built military bases all over that country, and generally indulged their geopolitical fantasies about dominating the oil heartlands of the planet for eternity, ISIS would have been an unlikely possibility, no matter the ethnic and religious tensions in the region. They essentially launched the drive that broke state power there and created the kind of vacuum that a movement like ISIS was so horrifically well suited to fill.

All in all, it’s a remarkable accomplishment to look back on. In September 2001, when George and Dick launched their “Global War on Terror” to wipe out — so they then claimed — “terrorist networks” in up to 60 countries, or as they preferred to put it, “drain the swamp,” there were scattered bands of jihadis globally, while al-Qaeda had a couple of camps in Afghanistan and a sprinkling of supporters elsewhere. Today, in the wake of the invasions of Afghanistan and Iraq and an air power intervention in Libya, after years of drone (and non-drone) bombing campaigns across the Greater Middle East, jihadist groups are thriving in Yemen and Pakistan, spreading through Africa (along with the U.S. military), and ISIS has taken significant parts of Iraq and Syria right up to the Lebanese border for its own bailiwick and is still expanding murderously, despite a renewed American bombing campaign that may only strengthen that movement in the long run.

Has anyone covered this nightmare better than the world’s least embedded reporter, Patrick Cockburn of the British Independent? Not for my money. He’s had the canniest, clearest-eyed view of developments in the region for years now. As it happens, when he publishes a new book on the Middle East (the last time was 2008), he makes one of his rare appearances at TomDispatch. This month, his latest must-read work, The Jihadis Return: ISIS and the New Sunni Uprising, is out. Today, this website has an excerpt from its first chapter on why the war on terror was such a failure (and why, if Washington was insistent on invading someplace, it probably should have chosen Saudi Arabia). It includes a special introductory section written just for TomDispatch. Thanks go to his publisher, OR Books. Tom

Why Washington’s War on Terror Failed

[This essay is excerpted from the first chapter of Patrick Cockburn’s new book, The Jihadis Return: ISIS and the New Sunni Uprising, with special thanks to his publisher, OR Books. The first section is a new introduction written for TomDispatch.]

There are extraordinary elements in the present U.S. policy in Iraq and Syria that are attracting surprisingly little attention. In Iraq, the U.S. is carrying out air strikes and sending in advisers and trainers to help beat back the advance of the Islamic State of Iraq and the Levant (better known as ISIS) on the Kurdish capital, Erbil. The U.S. would presumably do the same if ISIS surrounds or attacks Baghdad. But in Syria, Washington’s policy is the exact opposite: there the main opponent of ISIS is the Syrian government and the Syrian Kurds in their northern enclaves. Both are under attack from ISIS, which has taken about a third of the country, including most of its oil and gas production facilities.

But U.S., Western European, Saudi, and Arab Gulf policy is to overthrow President Bashar al-Assad, which happens to be the policy of ISIS and other jihadis in Syria. If Assad goes, then ISIS will be the beneficiary, since it is either defeating or absorbing the rest of the Syrian armed opposition. There is a pretense in Washington and elsewhere that there exists a “moderate” Syrian opposition being helped by the U.S., Qatar, Turkey, and the Saudis. It is, however, weak and getting more so by the day. Soon the new caliphate may stretch from the Iranian border to the Mediterranean and the only force that can possibly stop this from happening is the Syrian army.

The reality of U.S. policy is to support the government of Iraq, but not Syria, against ISIS. But one reason that group has been able to grow so strong in Iraq is that it can draw on its resources and fighters in Syria. Not everything that went wrong in Iraq was the fault of Prime Minister Nouri al-Maliki, as has now become the political and media consensus in the West. Iraqi politicians have been telling me for the last two years that foreign backing for the Sunni revolt in Syria would inevitably destabilize their country as well. This has now happened.

By continuing these contradictory policies in two countries, the U.S. has ensured that ISIS can reinforce its fighters in Iraq from Syria and vice versa. So far, Washington has been successful in escaping blame for the rise of ISIS by putting all the blame on the Iraqi government. In fact, it has created a situation in which ISIS can survive and may well flourish.

The sharp increase in the strength and reach of jihadist organizations in Syria and Iraq has generally been unacknowledged until recently by politicians and media in the West. A primary reason for this is that Western governments and their security forces narrowly define the jihadist threat as those forces directly controlled by al-Qa‘ida central or “core” al-Qa‘ida. This enables them to present a much more cheerful picture of their successes in the so-called war on terror than the situation on the ground warrants.

In fact, the idea that the only jihadis to be worried about are those with the official blessing of al-Qa‘ida is naïve and self-deceiving. It ignores the fact, for instance, that ISIS has been criticized by the al-Qa‘ida leader Ayman al-Zawahiri for its excessive violence and sectarianism. After talking to a range of Syrian jihadi rebels not directly affiliated with al-Qa‘ida in southeast Turkey earlier this year, a source told me that “without exception they all expressed enthusiasm for the 9/11 attacks and hoped the same thing would happen in Europe as well as the U.S.”

Jihadi groups ideologically close to al-Qa‘ida have been relabeled as moderate if their actions are deemed supportive of U.S. policy aims. In Syria, the Americans backed a plan by Saudi Arabia to build up a “Southern Front” based in Jordan that would be hostile to the Assad government in Damascus, and simultaneously hostile to al-Qa‘ida-type rebels in the north and east. The powerful but supposedly moderate Yarmouk Brigade, reportedly the planned recipient of anti-aircraft missiles from Saudi Arabia, was intended to be the leading element in this new formation. But numerous videos show that the Yarmouk Brigade has frequently fought in collaboration with JAN, the official al-Qa‘ida affiliate. Since it was likely that, in the midst of battle, these two groups would share their munitions, Washington was effectively allowing advanced weaponry to be handed over to its deadliest enemy. Iraqi officials confirm that they have captured sophisticated arms from ISIS fighters in Iraq that were originally supplied by outside powers to forces considered to be anti-al-Qa‘ida in Syria. More