The World Meteorological Organization warned Monday that the planet now faces a 50% chance of temporarily hitting 1.5°C of warming above pre-industrial levels over the next five years, another signal that political leaders—particularly those of the rich nations most responsible for carbon emissions—are failing to rein in fossil fuel use.
“For as long as we continue to emit greenhouse gases,
temperatures will continue to rise.”
In 2015, by comparison, the likelihood of briefly reaching or exceeding 1.5°C of global warming over the ensuing five-year period was estimated to be “close to zero,” the WMO noted in a new climate update. The report was published amid a deadly heatwave on the Indian subcontinent that scientists say is a glimpse of what’s to come if runaway carbon emissions aren’t halted. Thus far, the heatwave has killed dozens in India and Pakistan.   Read More

Earth from the Moon

Final call to save the world from ‘climate catastrophe’
It’s the final call, say scientists, the most extensive warning yet on the risks of rising global temperatures.
Their dramatic report on keeping that rise under 1.5 degrees C says the world is now completely off track, heading instead towards 3C.
Keeping to the preferred target of 1.5C above pre-industrial levels will mean “rapid, far-reaching and unprecedented changes in all aspects of society”.
It will be hugely expensive – but the window of opportunity remains open.
https://www.bbc.com/news/science-environment-45775309?SThisFB

It is also an almanac of global energy use. The initial volume opens with a 200-page primer busy with tables, lists, and data (“I assure you that there will be no harm in skipping to page 217”) and concludes with 80 pages of definitions, units, and conversions (“Readers should feel free to skip this section”). It is a travelogue to natural landscapes riven by energy production, most prominently Fukushima (nuclear), West Virginia (coal), Colorado (natural gas), and the United Arab Emirates (oil). It is a work of oral history, containing dozens of interviews with laborers who toil in or live beside nuclear reactors, caves, and oil refineries, paired with Vollmann’s own snapshots. And it is a compassionate work of anthropology that tries to make sense of man’s inability to weigh future cataclysm against short-term comfort. Carbon Ideologies is most fascinating, however, for what it is not: a polemic.

Nearly every book about climate change that has been written for a general audience contains within it a message of hope, and often a prod toward action. Vollmann declares from the outset that he will not offer any solutions, because he does not believe any are possible: “Nothing can be done to save [the world as we know it]; therefore, nothing need be done.” This makes Carbon Ideologies, for all its merits and flaws, one of the most honest books yet written on climate change. Vollmann’s undertaking is in the vanguard of the coming second wave of climate literature, books written not to diagnose or solve the problem, but to grapple with its moral consequences. http://bit.ly/2wXUAMF

We started our class 30 minutes earlier today because a Chinese official from UNESCO International Research and Training Center for Rural Education (INRULED) visited us and wanted to spend some time in the class before going to catch his flight in Chengdu.

We are participating in a 4 week course in ecovillage design at the UNESCO rural development center in Chengdu, China and fortunately there is a VPN connection here that allows us to “spoof” the Chinese censors and reach into Medium, Blogger, Google, Facebook, Twitter and all the otherwise banned sites, so this week I can post.

Putting ecovillage movement in the grand background of ecological civilization, highlighting the role of education and training

In a 10-minutes, rapid-fire informative speech, the official traced the history of sustainable movements to two influential books: Silent Spring (Wiki, 1962) and The Limits to Growth (Wiki,1972). The model of our industrial civilization is basically consuming the resources of our planet and leave us trash eventually. This is not sustainable. In March, 2018, Chinese government added in constitution “the building of an ecological civilization” to the duties and powers of the State Council (1). It’s a new form of human civilization based on sustainable principles (Wiki).

How can we realize ecological civilization? He firmly believes that education and training are critical building blocks. He went on that UNESCO has laid the theory groundwork by a few profoundly influential reports: Learning to Be (1972), Learning, the Treasures within (1996), and Rethinking Education (2015) For people in the class who may become future designers or developers of ecovillages, you will have a lot of work, as one of his few ending points.
http://bit.ly/2oTS7ze

How can civil society organizations (CSOs) build a broad movement that draws in, represents and mobilises the citizenry, and how can they effect fundamental, systemic transformation, rather than trading in incremental change? 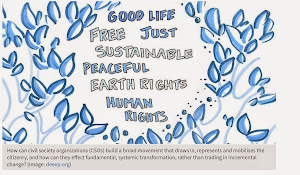 JOHANNESBURG, South Africa – Has organised civil society, bound up in internal bureaucracy, in slow, tired processes and donor accountability, become simply another layer of a global system that perpetuates injustice and inequality?

How can civil society organizations (CSOs) build a broad movement that draws in, represents and mobilises the citizenry, and how can they effect fundamental, systemic transformation, rather than trading in incremental change?

This kind of introspective reflection was at the heart of a process of engagement among CSOs from around the world that gathered in Johannesburg from Nov. 19 to 21 for the “Toward a World Citizens Movement: Learning from the Grassroots” conference.

“It is important that people understand the inter-linkages at the global level; that they understand that they are part of the system and can act, based on their rights, to influence the system in order to bring about change and make life better – so it’s no longer someone else deciding things on behalf of the citizens”
– Rilli Lappalainen, Secretary-General of the Finnish NGDO PlatformKey partners were CIVICUS (the World Alliance for Citizen Participation, which is one of the largest and most diverse global civil society networks) and GCAP (Global Call to Action Against Poverty).

The three-day gathering was part of a larger series of conferences and activities that were arranged to coincide during the 2014 International Civil Society Week organised by CIVICUS, which closed Nov. 24.

Global citizenship is a concept that is gaining currency within the United Nations system, to the delight of people like Rilli Lappalainen, Secretary-General of the Finnish NGDO Platform and a key advocate for global citizenship education.

At the heart of this concept is people’s empowerment, explains Lappalainen. “It is important that people understand the inter-linkages at the global level; that they understand that they are part of the system and can act, based on their rights, to influence the system in order to bring about change and make life better – so it’s no longer someone else deciding things on behalf of the citizens.”

The process of introspection around building an effective civil society movement that can lead to such change began a year ago at the first Global Conference, also held in Johannesburg.

The discourse there highlighted the need for new ways of thinking and working – for the humility to linger in the uncomfortable spaces of not knowing, for processes of mutual learning, sharing and questioning.

This new spirit of inquiry and engagement, very much evident in the creative, interactive format of this year’s conference, is encapsulated in an aphorism introduced by thought-leader Bayo Akomolafe from Nigeria: “The time is very urgent – let us slow down”.

Akomolafe’s keynote address explored the need for a shift in process: “We are realising our theories of change need to change,” he said. “We must slow down today because running faster in a dark maze will not help us find our way out.”

“We must slow down today,” he continued, “because if we have to travel far, we must find comfort in each other – in all the glorious ambiguity that being in community brings … We must slow down because that is the only way we will see … the contours of new possibilities urgently seeking to open to us.”

A key opportunity for mutual learning and questioning was provided on the second day by a panel on ‘Challenging World Views’.

A female activist from Bhutan who was to join the panel was unable to do so because of difficulties in acquiring a visa – a situation that highlighted a troubling observation made by Danny Sriskandarajah, head of CIVICUS, about the ways in which the space for CSOs to work is being shrunk around the world.

The absence of women on the panel was noted as problematic. How is it possible to effectively question a global system that is so deeply patriarchal without the voices of women, asked a male participant. This prompted the spontaneous inclusion of a female member of the audience.

In the spirit of embracing not-knowing, the panellists were asked to pose the questions they think we should be asking. How do we understand and access our power? How do we foster people’s engagement and break out of our own particular interests to engage in more systems-based thinking? How can multiple worldviews meet and share a moral compass?

Ubuntu philosophy, explained O’Donoghue, can be defined by the statement: “A person is a person through other people.”

The implications of this perspective for the issues at hand are that answers to the problems affecting people on the margins cannot be pre-defined from the outside, but must be worked out through solidarity and through a process of struggle. You cannot come with answers; you can only come into the company of others and share the problems, so that solutions begin to emerge from the margins.

The core perspective of soka philosophy is that each person has the innate ability to create value – to create a positive change – in whatever circumstances they find themselves. Millions of people, Sakurai pointed out, are proving the validity of this idea in their own contexts. This is the essence of the Soka movement.

His point was echoed the following evening in the address of Graca Machel, wife of the late Nelson Mandela, at a CIVICUS reception, in which she spoke of the profound challenges confronting civil society as poverty and inequality deepen and global leaders seem increasingly dismissive of the voices of the people.

Then, toward the end of her speech, she softly recalled “my friend Madiba” (Mandela’s clan name) in the final years of his life, and his consistent message at that time that things are now in our hands.

What he showed us by his example, she said, is that each person has immense resources of good within them. Our task is to draw these out each day and exercise them in the world, wherever we are and in whatever ways we can.

Those listening to Machel saw Mandela’s message as a sign of encouragement in their efforts to create the World Citizens Movement of tomorrow. More