The Arctic may be seen as geographically isolated from the rest of the world, yet the Inuit hunter who falls through the thinning sea ice is connected to melting glaciers in the Andes and the Himalayas and to the flooding of low-lying and small island states.

Inuit are experiencing firsthand the adverse effects of global environmental changes. But we are not powerless victims. We are determined to remain connected to the land, and sufficiently resilient to adapt to changing natural forces as we have for centuries.

Discussion of climate change frequently tends to focus on political, economic and technical issues rather than human impacts and consequences. We need to be aware of the dramatic social and cultural impacts indigenous peoples face in coming years.

For generations Inuit have observed the environment and have accurately predicted weather and sea-ice conditions, enabling us to travel safely on the sea ice to hunt seals, whales, walrus and polar bears. Talk to hunters across the North, and they will tell you the same story: the weather is increasingly unpredictable. The look and feel of the land is different. The sea ice is changing. Hunters are having difficulty navigating and traveling safely. We have even lost experienced hunters through the ice in areas that, traditionally, were safe. As a result of melting glaciers it is now difficult, sometimes even dangerous, for us to travel to many of our traditional hunting and harvesting sites. 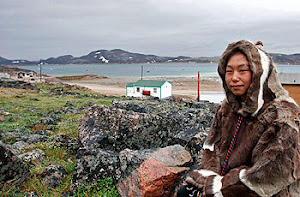 Several Inuit villages have already been so damaged by global warming that relocation, at the cost of hundreds of millions of dollars, is now their only option. Melting sea ice and thawing permafrost have caused damage to houses, roads, airports and pipelines; erosion, slope instability and landslides; contamination of drinking water; coastal losses to erosion of up to 30 meters per year; and melting of natural ice cellars for food storage.

Plans are well under way to relocate certain Arctic communities. Climate change is not just a theory to us in the Arctic; it is a stark and dangerous reality. Climate change is undermining the ecosystem upon which Inuit depend for their physical and cultural survival.

The Arctic is of vital importance in the global debate on how to deal with climate change because the Arctic is the barometer of the globe’s environmental health. We are indeed the canary in the global coal mine.

The Arctic Climate Impact Assessment projects dramatic and drastic depletion of sea ice. In the next few decades year-round sea ice may be limited to a small portion of the Arctic Ocean around the North Pole. The rest of the Arctic will be ice-free in summer.

Polar bears, walrus, ringed seals and likely other species of seals are projected to virtually disappear. This is not to mention the millions of Arctic seabirds and fish. Our ecosystem will be transformed, with tragic results. Climate change in the Arctic is not just an environmental issue with unwelcome economic consequences. It is a matter of livelihood, food and individual and cultural survival. It is a human issue.

What can Inuit—only 155,000 of us—do about this global situation? First, we refuse to play the role of powerless victim. Responding to climate change has split the nations of the world. Our plight and the Arctic Assessment show the compelling case for global unity and clarity of purpose to forestall a future that is not preordained.

Our rights, our human rights, to live as we do and to enjoy our unique culture as part of the globe’s cultural heritage, are at issue.

Short-term business interests must change, and people must take stock of whether or not a way of life based on consumption is ultimately sustainable. What is happening now to Inuit will happen soon to people in the South. The experience of Inuit in the Arctic is shared by residents of small island states in the Pacific, many people in the Caribbean and elsewhere.

We are working on many fronts to convince the world to take long-term action. Climate change is not about scoring political points. It is about families, parents, children and the lives we lead in our communities throughout the world. More