A little-noted portion of the chain of pipelines and equipment that brings natural gas from the field into power plants and homes is responsible for a surprising amount of methane emissions, according to a study published on Tuesday. 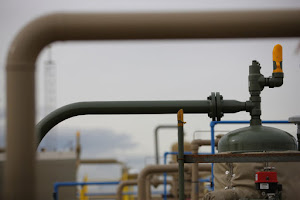 Natural-gas gathering facilities, which collect from multiple wells, lose about 100 billion cubic feet of natural gas a year, about eight times as much as estimates used by the Environmental Protection Agency, according to the study, which appeared in the journal Environmental Science & Technology.

The newly discovered leaks, if counted in the E.P.A. inventory, would increase its entire systemwide estimate by about 25 percent, said the Environmental Defense Fund, which sponsored the research as part of methane emissions studies it organized.

“The gathering and processing sector, a piece of the supply chain that most people don’t even know exists, may be the biggest single fraction of emissions coming from natural gas,” said Mark Brownstein, who leads the Environmental Defense Fund’s work on methane emissions.

Methane is the main component of natural gas and has a more potent short-term effect on climate change than carbon dioxide. The effect that the newfound emissions would have on climate change over 20 years, the Environmental Defense Fund said, would be similar to that of 37 coal-fired power plants.

Many gathering facilities use puffs of natural gas in valves that open and close to regulate gas or liquid flow, releasing a bit of methane into the air with every cycle. Anthony J. Marchese, a professor of mechanical engineering at Colorado State and the lead author of the new study, said that this practice surprised him. “I was: ‘Really? That’s what they do?’ ” he said.

Companies can substitute other relatively inexpensive technologies for the methane-leaking systems, he said, but “they’re so used to using gas pneumatic, and they think it’s so reliable, they are reluctant to change.”

The recognition of gathering facilities as a major source of methane leaks is an opportunity to look harder and fix them, and to upgrade to equipment that does not emit natural gas, Mr. Brownstein said. “None of this is rocket science,” he said. “Most of it is auto mechanics.”

The Obama administration, while promoting a boom in natural gas, has pushed for businesses to reduce leaks. The E.P.A. proposed new standards on methane emissions on Tuesday. Those rules, however, would apply only to new and modified equipment. “That clearly doesn’t begin to address the majority of the problem — the stuff that is already in the field and operating,” Mr. Brownstein said.

The agency has not closely tracked emissions from gathering facilities before. A statement by the agency in response to questions about the study said that the “E.P.A. looks forward to reviewing the upcoming E.D.F. study on methane emissions from natural gas systems.”

Citing the administration’s methane strategy and noting that “substantial new amounts of information” were becoming available, the statement said that the “E.P.A. will continue to refine its emission estimates to reflect the most robust and up-to-date information available.”

Professor Marchese said that the amount of gas that escapes from gathering facilities each year could heat 3.2 million homes. Wasting a potentially valuable resource, not to mention harming the environment, he said, mystified him. “Why would you ever vent it when you can use it to generate electricity?” he added.

A spokesman for one of the gas industry companies that participated in the study said that the research would be helpful. “This ultimately helps us perform better,” said John Christiansen, a spokesman for Anadarko Petroleum. The research would help the company “get that methane back in the sales line,” he added, “which is ultimately in our best interest — and everybody’s best interest.” More