(CNN) — The ice man cometh. And does so early this year, after a former Pacific typhoon flew up toward the Arctic and rammed the jet stream. 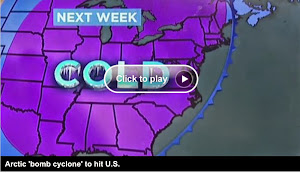 The stream has whipped south, dragging down frigid air from Canada over the northern Plains and Mountain States and the Upper Midwest, according to the National Weather Service.

It is already plunging temperatures below freezing there and will hammer them into the teens and single digits in many places by midweek, even lower in others.

Great Falls, Montana, will shiver at 9 below zero on Tuesday night.

It’s the coldest weather of the season, the weather service said.

Minneapolis could soon get a foot of snow, the service said, with the Minnesota city experiencing below-freezing temperatures that could last for eight days.

The snap is forecast to lay down the first broad layer of wintry snow, flurries, sleet or ice — long before winter starts — from Montana down to Nebraska and over to Wisconsin.

It will accumulate in inches in the northern Rockies, northern Plains and Great Lakes.

People farther south will also shiver. “Much of the nation east of the Rockies is expected to see a major pattern change by the beginning of the work week,” the weather service said.

The western Dakotas are also forecast to get significant snow.

Lows will drop to freezing in Kansas City late Monday, then into the 20s a night later. The snap will stop short, leaving much of the Deep South and Southwest in a fall-like warm zone.

Rain is expected to hit Chicago and Milwaukee on Monday and Tuesday, with a few snowflakes mixed in, according to the service on Sunday afternoon.

Residents in the northern United States can thank a whopping tropical cyclone in the Pacific Ocean for the wintry blast.

The remnants of super Typhoon Nuri rolled up north over Alaska’s Aleutian Islands on Friday, kicking off the ripple of Arctic air in the other direction.

Nuri is now the strongest known Northern Pacific cyclone on record, according to the National Weather Service Ocean Prediction Center.

Its remnants plowed into cold air adding violent energy as it went north, similar to what Superstorm Sandy did in the Atlantic two years ago. That earned it the weather moniker “bomb cyclone. More