As we previewed on Friday, when we reported that “Russia Nears Completion Of Second “Holy Grail” Gas Deal With China“, moments ago during the Asia-Pacific Economic Cooperation forum taking place this weekend in Beijing, Russia and China signed 17 documents Sunday, greenlighting a second “mega” Russian natural gas to China via the so-called “western” or “Altay” route, which as previously reported, would supply 30 billion cubic meters (bcm) of gas a year to China. 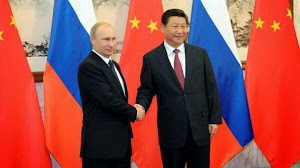 Among the documents signed between Russian President Vladimir Putin and Chinese leader Xi Jinping were the memorandum on the delivery of Russian natural gas to China via the western route, the framework agreement on gas supplies between Russia’s Gazprom and China’s CNPC and the memorandum of understanding between the Russian energy giant and the Chinese state-owned oil and gas corporation.

“We have reached an understanding in principle concerning the opening of the western route,” Putin said. “We have already agreed on many technical and commercial aspects of this project, laying a good basis for reaching final arrangements.”

RIA adds, citing Gazprom CEO Alexei Miller, that the documents signed by Russia and China on Sunday define the western route as a priority project for the gas cooperation between the two countries.

“First of all these documents stipulate that the “western route” is becoming a priority project for our gas cooperation,” Miller said, adding that the documents provide for the export of 30 billion cubic meters of Russian gas to China annually for a 30-year period.

Miller noted that with the increase of deliveries via the western route, the total volume of Russian gas deliveries to China may exceed the current levels of export to Europe in the medium-term perspective. In other words, China has now eclipsed Europe as Russia’s biggest, and most strategic natural gas client. More:

Miller, who heads Russia’s state-run energy giant, told reporters that “taking into account the increase in deliveries via ‘western route,’ the volume of supplied [natural gas] to China could exceed European exports in the mid-term perspective.”

This came after Russian and Chinese energy executives signed on Sunday a package of 17 documents, including a framework deal between Gazprom and China’s energy giant CNPC to deliver gas to China via the western route pipeline.

Miller said Gazprom and CNPC were in talks on a memorandum of understanding that would see Russia bring gas to China through the western route pipeline, as well as a framework agreement between the two state-owned companies to carry out the deliveries.

The western route will connect fields in western Siberia with northwest China through the Altai Republic. Second and third sections may be added to the pipeline at a later date, bringing its capacity up to 100 billion cubic meters a year. 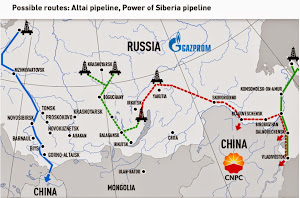 Also of note, among the business issues discussed by Putin and Xi at their fifth meeting this year was the possibility of payment in Chinese yuan, including for defense deals military, Russian presidential spokesman Dmitry Peskov was cited as saying by RIA Novosti. More from RIA:

“Much attention has been paid to the topic of mutual payments in diverse fields … in yuans which will help to strengthen the yuan as the region’s reserve currency,” Peskov said commenting on the meeting held between Putin and Xi on the sidelines of the Asia-Pacific Economic Cooperation (APEC) summit in Beijing.

On October 13, Russian Economic Development Minister Alexei Ulyukayev announced that Russia was considering Chinese market to partially substitute access to the financial resources of the European Union and the United States.

The European Union and the United States have imposed several rounds of economic sanctions on Russia over its alleged involvement in the Ukrainian crisis, a claim Moscow has repeatedly denied. The restrictions prohibit major Russian companies from seeking financing on western capital markets.

Meanwhile, as China and Russia keep forging ahead in a world in which the two becomes tied ever closer in a symtiotic, dollar-free relationship, this is how the US is faring at the same meeting: “China, U.S. Parry Over Preferred Trade Pacts at APEC: Little Progress Made on Separate Trade Deals at Asia-Pacific Economic Cooperation Forum.”

The U.S. blocked China’s initiatives because it worried that launching FTAAP talks would impede progress on a separate trade deal, the Trans-Pacific Partnership. The ministers’ statement said that any FTAAP deal would build on “ongoing regional undertakings”—a reference to TPP and other regional trade deals.

“The Chinese got all they could expect—a reaffirmation that we all share in the vision of having a regional integrated model” for trade, said U.S. Chamber of Commerce Executive Vice President Myron Brilliant.

U.S. Secretary of State John Kerry said Saturday that negotiating the TPP “is a battle that we absolutely must win.” Ministers from the 12 TPP nations met Saturday afternoon to try to narrow differences, including disputes between the U.S. and Japan over agriculture and auto trade. On Monday, the leaders of the TPP nations are again scheduled to discuss the trade deal, although no breakthrough is expected.

The U.S. is trying to tie an ITA deal to progress on other trade deals with China, as a way to increase its leverage with Beijing. “How the ITA negotiations proceed is an important and useful data point” on China’s ability to negotiate an investment treaty with the U.S., Mr. Froman said.

Trade analysts say the U.S. also hopes to use China’s desire to have the Beijing conference produce concrete results as leverage. This is the first major international summit held in China since Xi Jinping took over as Communist Party chief in 2012, and the government wants to use the session to affirm China’s greater role in the world.

Good luck trying to “increase US leverage with Beijing” using a trade conference being held in Beijing as the venue.

In other words instead of actual trade agreements, the US merely jawboned and “shared visions.”

Then again, as noted here since 2010, in a world in which one can merely “print one’s way to prosperity”, what is the need for actual trade? Surely, which China and Russia are expanding their commercial ties at the expense of Europe, the US can continue to pretend it is the world’s only superpower and has no need for either Russia or China. After all, Mr. Chairmanwoman can always go back to work and print some more of that “world reserve currency.” More