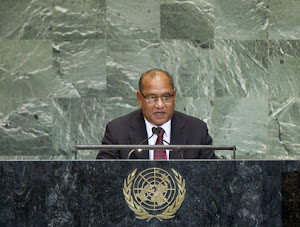 “Some members have criticized us for focusing too much on climate change and sea level rise, but these issues influence our every decision and affect every aspect of life on our islands,” said Christopher J. Loeak, President of the Marshall Islands, stressing that small island countries cannot afford to speak of climate change as a future threat. Tuilaepa Sailele Malielegaoi, Prime Minister of Samoa, underscored that apportioning blame serves no useful purpose, saying “those who exploit the traditional divide between developed and developing countries and ideological and political differences do so conveniently to mask their unwillingness to be part of the solution to an impending global catastrophe.” He suggested viewing the world as a single constituency where everyone must work together within the limits of their capacity and capability to address climate change. Charles Angelo Savarin, President of Dominica, Anote Tong, President of Kiribati, and Malielegaoi emphasized climate change is not an event in the future but an issue SIDS are already experiencing.

Several speakers commended the Climate Summit, welcoming its political momentum. Tong, Ikililou Dhoinine, President of the Comoros, Enele Sosene Sopoga, Prime Minister of Tuvalu, and Carlos Raúl Morales, Minister for Foreign Affairs of Guatemala, called for translating Summit commitments into action. Malielegaoi said the Summit underscored that the world is focusing more on symptoms of climate change than on the root causes.

Noting Luxembourg will assume the Presidency of the Council of the EU in the second semester of 2015, Xavier Bettel, Prime Minister of Luxembourg, said his country would “spare no effort” to find an international agreement on climate, applicable to all countries, with the objective of keeping global warming below two degrees.

Catherine Samba-Panza, President of the Transitional Government of the Central African Republic, urged ratification of the Doha amendment to the Kyoto Protocol.

Tong, Loeak and Tupou highlighted national action on adaptation and integrated disaster risk management (DRM). Tong said Kiribati's ‘migration with dignity' strategy is an investment in youth education to allow them to develop employable skills so that they can migrate to other countries voluntarily.

Several countries mentioned renewable energy efforts as part of contributions to addressing climate change, including Steinmeier, Sopoga, Nicos Anastasiades, President of Cyprus, Tomislav Nikolić, President of Serbia, and Morales. Savarin and Loeak described their efforts to increase renewable energy, including through SIDS DOCK, a platform for the development of sustainable energy in SIDS. Erlan A. Idrissov, Minister for Foreign Affairs of Kazakhstan, highlighted the promotion of best practices in sustainable energy, noting it is launching a project on the installation of biogas systems in nine Pacific SIDS. Sheikh Abdullah Bin Zayed Al Nahyan, Minister for Foreign Affairs of the United Arab Emirates (UAE), described his country's efforts and investments in renewable energy throughout the world. Muhammad Nawaz Sharif, Prime Minister of Pakistan, said his country's goals are aligned with the Sustainable Energy for All (SE4ALL) Initiative.

Emanuel Mori, President, Federated States of Micronesia, described its proposal to amend the Montreal Protocol to phase down the production and consumption of hydrofluorocarbons (HFCs), which are GHGs, to prevent temperature increases. He stressed success with the Montreal Protocol over the next six months is “our ticket to a successful outcome in Paris” and urged adoption of the HFC amendment.

On climate financing, Loeak urged the full capitalization of the Green Climate Fund (GCF) and other financial mechanisms to address climate change and support the post-2015 agenda. He applauded nations who have pledged specific amounts and urged delivery of real money by major economic powers who he said are also major polluters. Sopoga stressed adequate resources for the GCF, particularly access for SIDS. Nguesso identified innovative financing, technology transfer and capitalization of the GCF as critical. Koirala, Bangladesh and Serbia stressed financing for adaptation, with Koirala saying there should be special provisions for addressing least developed countries (LDCs) and SIDS mitigation and adaptation needs in additional to regular official development assistance (ODA). Bangladesh also recommended adequate, predictable and additional climate finance, support for capacity and institution building and access to locally adaptable technologies.

Bettel highlighted Luxembourg's contribution of 5 million Euros to the GCF, which is new and additional to its ODA. Steinmeier stated Germany's commitment of US$1 billion to the GCF.

Climate change should be included in the post-2015 agenda, according to Savarin and Morales. Sopoga supported a standalone Sustainable Development Goal (SDG) on climate change. Idrissov and San Marino highlighted links between climate change and sustainable development. Bangladesh reiterated the need to integrate the UNFCCC, DRR and SDG processes.