After the report on mountaineering and my experiences on the ascent to Mount Aconcagua, I return to the subject of water, and the opportunities and challenges in recycling it.

In earlier posts here I wrote about a very sophisticated system of wastewater recycling in Singapore, which turns it back into drinking water. 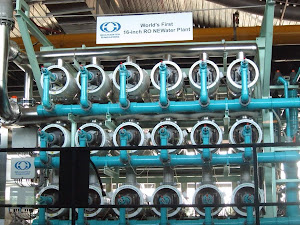 And at this year’s Singapore International Water Week, the Californian Orange County received the highest recognition, for a scheme where perfectly treated wastewater is pumped back into underground aquifers, to be later pumped up again as drinking water. It also serves as a barrier to seawater intrusion.

These two examples, especially Singapore, are probably the most far-reaching examples I know of achievement in water recycling.

Places like San Diego, hit by a drought, are now re-considering again the idea to follow the Singapore example, despite some opposition from civil society. So, to what extent is it possible to scale up these kinds of activities globally; is there potential for wastewater to contribute in a substantial way to closing the gap of some 300 cubic kilometres between the level of water withdrawals and sustainable supply?

Estimates show close to 300 cubic kilometres of wastewater is generated by municipalities per year (average 2003-12). This is the equivalent of some 50% of global average annual withdrawals for household use.

Part of the other 50% of withdrawals not counted as ‘wastewater’ may well be lost in leakage in pipes (in some countries this accounts for up to 70% of the water withdrawn by the municipal water supply schemes). Another part could be ‘used’ through evapotranspiration in lawns and gardens, etc.

As the table below shows, only about half of this wastewater is actually collected and treated, but less than 10% of the treated wastewater is directly reused. 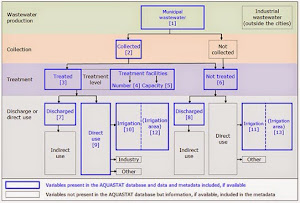 To get an idea of how municipal water could contribute to closing the gap between withdrawals and sustainable supply, let me go through the water supply chain.

The first step would require a better understanding of what happens with the 50% of municipal water apparently ‘disappearing’. Where this is down to leakage, governments have to set the right incentives so municipal water authorities address the issue.

One way proposed by the 2030 Water Resources Group (2030 WRG) in South Africa, which has been implemented by the government there, is to measure both water delivery and water intake, and to pay a premium to the schemes where the difference (i.e., water unaccounted for) gets smaller.

According to 2030 WRG cost-curve estimates, the cost savings would by far exceed the necessary spending to reduce the leakage.

As part of my proposals for targets within the water goal for post-2015 sustainable development, I suggest primary treatment of all wastewater by 2030 – an idea I will come back to in a later post.

So, what happens with 285 km³ of estimated wastewater generated, and what needs to be done? We will first have to increase collection, particularly in economically deprived areas, to make sure wastewater is collected and available for proper treatment.

Actually, only 36% of the world’s population has a sewage connection; this leaves 4.6 billion people unconnected. According to a WHO study, initial investment to set up a sewer connection is about USD 170 per capita; so the investment cost to connect them would be somewhere close to USD 800 billion. The annual cost of capital, repayment and operating cost is estimated at USD 1 per m³.

Next: treatment of both the up-to-now untreated collected – and the newly collected – wastewater. Estimates amount to USD 0.35 per m³. A big part of this cost is energy, an often forgotten link in the water-food-energy nexus framework.

And last but not least: less than 10% of treated wastewater is used directly. This can and must be increased. Direct use is, for instance, the Singapore approach, bringing treated water back to consumers as so-called ‘NEWater’.

At Nestlé we have a similar approach. All our factories treat wastewater (in fact the first wastewater treatment plant in the group was built in the 1930s, so we understood the need for this very early) and as much of this treated wastewater as possible is used directly.

At the same time, we should keep in mind indirect use, even though it’s often difficult to measure. Treated wastewater is returned to rivers and then often withdrawn again and treated further for human consumption.

One might, for instance, assume that a significant part of the water in the River Thames, once it reaches London, is treated wastewater from communities further up the river. Increasing the share of direct use of wastewater should clearly be encouraged – in a form accepted by local communities.

So, all in all there are some significant opportunities to use treated wastewater as a resource, helping to close the gap between freshwater withdrawals and sustainable supply. But these opportunities need to be carefully evaluated, to make sure they are fully accepted, but also cost and energy effective when compared to other solutions. Via Peter Brabeck-Letmathe – Linkedin More