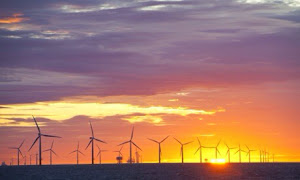 The link between economic growth and action to reduce the risks of climate change is the focus of the New Climate Economy report issued on Tuesday.

Its credentials are impressive and its findings emphatic.

Released by a global commission of 24 global economic leaders from government, business, finance and academia, led by former president of Mexico Felipe Calderón, the year-long study has involved individuals from over 100 organisations across every continent and advised by a panel of world-leading economists chaired by Lord Nicholas Stern.

It has come to a clear conclusion – action on climate change can improve economic performance.

This report provides compelling further evidence that firmly supports the UK’s vision for a global climate deal in Paris 2015 that I launched last week in the city of London – which was clear that prosperity and climate action can go hand in hand.

The reason, the New Climate Economy report concluded, is that raising resource efficiency, stimulating innovation and new investment in infrastructure are making it possible to tackle climate change at the same time as improving economic performance.

The report finds that over the next 15 years, trillions of pounds could be saved by building low-carbon into the key sectors of the global economy that include our cities, agriculture and energy. This could include better connected and more compact cities, through to restoring degraded lands and focusing on a transition to clean energy to improve economic performance and quality of life with lower emissions.

And we are putting this into action. The UK has been at the forefront of developing the climate change policy architecture that can ensure climate action is integrated into economic decision making.

This includes the 2008 Climate Change Act, which was the world’s first long-term, legally-binding national framework for reducing emissions, through our innovative carbon budgets regime. This means that our five year carbon budgets – that will eventually reach out to 2050 – are now being looked at as a potential model in other countries and we have already delivered on our first budget, which has seen a reduction in UK emissions by 24% between 1990 and 2012.

The 2013 Energy Act, for example, is creating the world’s first low-carbon electricity market and we are attracting record amounts of investment in renewables and our low carbon business sector is booming. In renewables, almost £29bn of investment delivered since 2010 and 2013, was a record year – with £8bn invested across the range of renewables technologies.

Electricity generation from renewable sources has doubled since 2010 and now supplies over 15% of the UK’s electricity.

We’re now a world leader in offshore wind – with more installed offshore wind capacity than the rest of the world combined, and supporting 18,300 jobs in the UK.

It has required UK business and international investors to recognise the costs of failure and the benefits of change and it has been sustained by a strong, vocal and committed network of NGOs, pressure groups and activists who have been instrumental in sustaining political will and public acceptance.

Last year, the world’s leading climate scientists, under the IPCC, reaffirmed that the Earth’s climate is indisputably changing, that human activity is the dominant cause – and the longer we leave action, the more difficult and costly it will be to avoid the worst effects. We now have the economics confirming that not only is climate action required to reduce climate risks, but that it is vital to building long-term, sustainable economic growth.

In the run up to the UN climate meeting in Paris next year I am determined that we continue to build on our success at home and expend every effort, and work with determination across government, across the parties, in partnership with business and civil society to reach a global, comprehensive, legally binding climate change deal. More