The western USA is not the only place suffering from lack of rain, Latin America’s economic powerhouse has been struck hard by a powerful and ongoing water crisis. 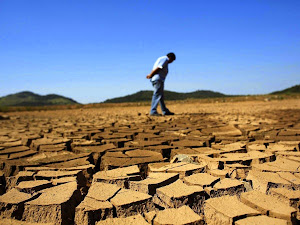 The worst drought since records began 84 years ago has constrained the Brazillian economy in many ways, particularly coffee production, agriculture and hydroelectric power generation, which accounted for 80% of electricity generation. This power fuels the economic development on which millions are counting to rise out of poverty, and the loss has slowed the entire economy, due to the need to import expensive fossil fuels in order to keep the lights on and water pumps running (costing $6 billion extra so far this year, while increasing the country’s greenhouse gas emissions).

Water rationing has been imposed in many parts of the country for months, but the situation is approaching a critical point. Nineteen large cities are under water rationing rules, and the water catchment capacity feeding the megalopolis of Sao Paolo (20 million inhabitants and the economic capital of the entire continent) is down to 10%. Carefully husbanded, and tapping water usually deemed of inferior quality, there is enough left to squeeze out of the system for a hundred days consumption. States are now squabbling over allocation of the remaining water resources, and fighting has erupted sporadically in some rural areas.

In Sao Paolo itself, financial incentives to reduce consumption have been accompanied by cutting water pressure at night, effectively cutting off all the poorer areas of the city which sit on hills. In nearby Gaurulhos residents of some neighbourhoods are getting water one day in three. Balancing the competing needs of drinking water and power generation is also having societal consequences, exacerbating general social tension, and helping fuel reactions such as the protests and riots back in June.

The drought may be linked to climate change, since the rains that normally come south from evaporation in the Amazon basin failed to arrive, a potentially very worrying symptom. It also reveals some of the likely types of economic cost and societal tension that will arise and worsen as the world warms further and the consequences begin to bite. Some early spring rains appeared in Brazil this week, enough at least to halt the fall in Sao Paolo’s reserves, but the prognosis for the coming rainy season is still very uncertain.