Russia’s decision to go ahead with the sale of Mi-35 attack helicopters to Pakistan, even in the face of official Indian concerns, is being seen by some quarters as evidence of a “major” regional re-alignment in the wake of the American drawdown in Afghanistan.

In fact, the Russia-Pakistan dialogue for regional integration has been underway for some time now and beyond security cooperation, it is more fundamentally driven by Moscow’s push towards ‘southern” markets and Pakistan’s need for a capable yet politically “manageable” strategic sector trade and investment partner. The Mi-35 sale (if it does materialize) reflects the fact that the geo-economic stakes for both sides are now high enough for them to make a concerted push towards a long term compartmentalized working relationship in a manner not dissimilar to the way in which their more traditional partners – India for Russia and America for Pakistan – deal with each other. Indeed, in a world characterized by both competition and cooperation the heady rhetoric of “strategic partnership” means little and it is the transactional content that weighs on any relationship. Far more than cooperation in counter-terrorism, Russia and Pakistan will have to move forward quickly on Putin’s commitment to invest in the latter’s energy and metallurgy sectors for their relationship to be meaningful. 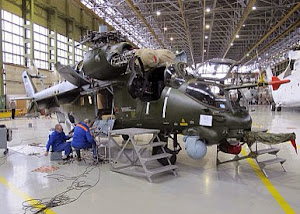 It could be argued that it was actually America’s entry into the region a decade ago that ultimately accentuated the circumstances that impel Russia and Pakistan closer to each other. Pakistan’s counter-terrorism cooperation with America salved with military aid has been toxic for domestic stability, as the situation in FATA and Waziristan reveal. As the tempo of internal stability operations has increased, Pakistan is keen to diversify away from America for certain classes of weaponry to a source that can supply cheaper and more rugged alternatives with a much smaller political price on the domestic front. The Mi-35 fits that bill and is likely to prove useful for Pakistani operations against the Tehrik-i-Taliban Pakistan (TTP) in mountainous areas, given its pedigree from the Afghan theater. At the moment Pakistan is using AH-1 Cobra Gunships that were originally obtained from America for use against Indian armoured formations in the plains and are proving expensive to use in operations against the TTP. Pakistan may not wish to be saddled with too much expensive American equipment that it can”t afford without generous aid.

Russia until recently was “reluctant” to transfer equipment that could be labelled as offensive in nature such as the Mi-35, and was holding back probably with an eye on a number of Indian military procurement tenders such as the multi-billion dollar medium multirole combat aircraft (MMRCA) competition. In 2010, Russia’s UAC, which was participating in the tender, even made noises about blocking the re-export of 150 KlimovRD-93 turbofans from China for Pakistan Air force’s future mainstay, the JF-17, on the grounds that it would compete with the Russian Mig-29 in international markets. By 2013, however, with Russia having lost out on the MMRCA tender and other Indian competitions, the Russians reiterated their commitment to continue supplies of the RD-93 and the JF-17 Block II commenced production in late 2013. So while much is being made of the Mi-35 sale, the fact is the Pakistanis seem set to rely on Russian engines for a majority of their fleet in the coming decades. When seen along with the fact that Russia supplied IL-78 MP refuelling tankers to Pakistan between 2009 and 2012, it is clear that comfort levels on both sides have been growing for quite a while now.

However, Russia is now willing to supply tactical equipment to Pakistan, especially in categories such as attack helicopters, where India either has domestic projects or may buy American. In many of these categories, though Pakistani spending ability given relatively cheaper Russian equipment is not insignificant, the pull for the Russians also comes from securing greater Pakistani willingness to help the Russians maintain security over energy infrastructure transiting areas like Eastern Afghanistan.

Once again, the American push to set up energy transit corridors from Central Asia to India such as the Turkmenistan-Afghanistan-Pakistan-India (TAPI) gas pipeline has created a situation of Russia-Pakistan commonality. Russia has for some time expressed an interest in joining the TAPI project and is now pushing decisively for it even while proposing new oil pipelines next to it. Russia is also eager to partner in the Iran-Pakistan-India pipeline project, opposed by the Americans, but with clear potential if Pakistan agrees to guarantee delivery of gas to the India border. Of course, besides military supplies, Russia can also offer Pakistan a lot of useful intelligence in the latter’s fight against the TTP given that group’s link with various Central Asian terrorist organizations.

For Pakistan, the opening of Russia as a source for weapons greatly increases Pakistan’s leg room vis-à-vis American pressure at the strategic level. Moreover while Pakistan is certainly eager to get involved in trilateral military projects with Russia and China like the JF-17 (which may now even be exported to Myanmar), direct Russian weapon sales are also coveted since the Pakistani military does not want to field only Chinese weapons either.

In fact, as terrorist activities in Xingjiang increase and Pakistan’s internal security situation worsens, the Chinese have been rather selective in their Pakistani investments. For instance, Pakistan’s decrepit railways have actually had to turn to India for help and are looking to lease up to 50 diesel engines as rolling stock. While Indian industry has been making overtures to Nawaz Sharif’s government to open up to cross border investment, the Pakistani military is still looking to a politically less sensitive prospect to shore up the flagging core sectors of the Pakistani economy clearly in need of reliable foreign capital.

Of course, if former Pakistani Army Chief General Kayani’s views are anything to go by, the military understands that there can be no Pakistan without a viable economy. While in uniform, it was Kayani who made a couple of visits to Russia and today the Russians are being wooed as a source for investment in Pakistan’s flagship Thar Coal Project as well as a strategic partner for upgrading the South Asian country’s moribund steel industry. Chechnya it seems is more distant than Kashmir or even Xingjiang and Russia could yet prove a politically acceptable partner for meeting an energy crisis ridden Pakistan’s requirements in quite a few sectors.

For Russia the benefits of succeeding in Pakistan are worth the risk, since it could leverage influence over Af-Pak to reach Indian shores. Indeed, even Pakistan’s Gwadar port, much touted as a Chinese “pearl” could actually host a LNG liquefaction facility that could send cheaper gas supplies than Qatar to import terminals in South India. However, both Russia and Pakistan will have to work quicker to remove long-standing trade disputes for a more conducive environment.

India will of course watch closely to see whether the Russians are indeed able to use the dependencies they are creating in Pakistan for closer regional energy integration. That the Russians are increasing strategic options for their neighbor when even the Saudis are handing over Lashkar-e-Taiba terrorists will obviously be of concern to New Delhi. That is especially so since the Pakistanis themselves are masters at selective counterterrorism at a time when many jihadists in Syria and Afghanistan may soon be looking for a re-direct.