North Side residents got a preview last week of a proposed electric power plant that will be moored off their coastline if its proponents get the necessary approvals. 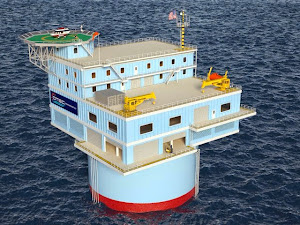 Eileen O’Rourke, the company’s chief operating officer, outlined the process by which heat in the upper layers of sea water can be turned into electricity. The process is known as Ocean Thermal Energy Conversion.

The production plant would be on a purpose-built barge, or floating power platform, 140 feet wide and 200 feet long and moored less than a mile offshore. Most of the plant would be about 16 feet above the water line, with a small part of it rising another eight feet.

The structure would include pipes to circulate the sea water, moorings to the sea floor and a cable that would carry the generated power under the beach and under the road to a sub-station on land. The sub-station would connect to CUC, Ms. O’Rourke explained.

Meetings have already been held with such entities as the Department of Environment, Public Works and the Environmental Assessment Board. The plan is for necessary permits to be applied for starting in October.

“We hope to get all permits and approvals in the first quarter of 2015,” Ms. O’Rourke said.

The target date for operation of the offshore power plant is the first quarter of 2017.

Pilar Bush, managing director of AtWater Consulting, confirmed that an island-wide public consultation will be held later this month.

OTEC International chose Grand Cayman for its first commercial system because CUC was “an open and willing partner” and because the Cayman government wants to move away from relying on fossil fuels, Ms. O’Rourke said. She noted that one power platform would produce 6.25 megawatts of electricity and that quantity would eliminate the need for 2.9 million gallons of imported diesel fuel annually. CUC’s average production of electricity is around 70 megawatts, it was noted.

Another reason Grand Cayman was chosen was the “excellent sea conditions” – including water temperatures and deep water proximity to the shoreline. There is a well-documented history of local ocean conditions, including extreme storm conditions. North Side was chosen as the best location, she said.

In response to questions from the audience, company representatives referred to job opportunities and the development of safety protocols, along with design features for the protection of marine life.

Start-up costs for the building and installation of the power platform will be expensive, Ms. O’Rourke indicated, but sea water as a source of renewable energy means low operating costs and protection of the consumer from the volatility of oil prices.

Development of the requisite technology was funded by the Abell Foundation, a non-profit organization based in Maryland, USA since 1953, said Ms. O’Rourke, who is also treasurer of the foundation. One of its objectives is supporting innovative efforts to solve systemic social, economic and environmental problems.

In 2000, The Abell Foundation acquired an exclusive license to the OTEC technology developed over decades by Sea Solar Power’s J. Hilbert Anderson and his son James Anderson. In 2001, Abell established a limited liability company with the mission bring OTEC to commercialization. The company became OTEC International LLC (OTI). Bringing the economical, renewable energy solution of ocean thermal energy conversion to developed and emerging markets is important to both OTI and Abell. More