Think of it as the true end of the beginning. Last week, Theodore “Dutch” Van Kirk, the final member of the 12-man crew of the Enola Gay, the plane (named after its pilot’s supportive mother) that dropped the atomic bomb on Hiroshima, died at age 93. 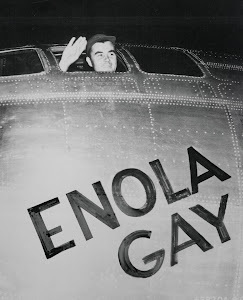 When that first A-bomb left its bomb bay at 8:15 on the morning of August 6, 1945, and began its descent toward its target, the Aioli (“Live Together”) Bridge, it was inscribed with a series of American messages, some obscene, including “Greetings to the Emperor from the men of the Indianapolis.” (That ship had delivered to the Pacific island of Tinian parts of the very bomb that would turn Hiroshima into an inferno of smoke and fire — “that awful cloud,” Paul Tibbetts, Jr., theEnola Gay's pilot, would call it — and afterward was torpedoed by a Japanese submarine with the loss of hundreds of sailors.)

The bomb, dubbed Little Boy, that had gestated in the belly of the Enola Gay represented not only the near endpoint of a bitter global war of almost unimaginable destruction, but the birthing of something new. The way for its use had been paved by an evolution in warfare: the increasing targeting of civilian populations from the air (something that can be seen again today in the carnage of Gaza). The history of that grim development extends from German airship bombings of London (1915) by way of Guernica (1937), Shanghai (1937), and Coventry (1940), to the fire bombings of Dresden (1945) and Tokyo (1945) in the last year of World War II. It even had an evolutionary history in the human imagination, where for decades writers (among others) had dreamed of the unparalleled release of previously unknown forms of energy for military purposes.

On August 7, 1945, a previous age was ending and a new one was dawning. In the nuclear era, city-busting weapons would be a dime a dozen and would spread from the superpowers to many other countries, including Great Britain, China, India, Pakistan, North Korea, and Israel. Targeted by the planet’s major nuclear arsenals would be the civilian inhabitants not just of single cities but of scores and scores of cities, even of the planet itself. On August 6th, 70 years ago, the possibility of the apocalypse passed out of the hands of God or the gods and into human hands, which meant a new kind of history had begun whose endpoint is unknowable, though we do know that even a “modest” exchange of nuclear weapons between India and Pakistan would not only devastate South Asia, but thanks to the phenomenon of nuclear winter also cause widespread famine on a planetary scale.

In other words, 70 years later, the apocalypse is us. Yet in the United States, the only nuclear bomb you're likely to read about is Iran’s (even though that country possesses no such weapon). For a serious discussion of the U.S. nuclear arsenal, those more than 4,800 increasingly ill-kept weapons that could incinerate several Earth-sized planets, you need to look not to the country’s major newspapers or news programs but to comic John Oliver — or TomDispatch regular Noam Chomsky. Tom

How Many Minutes to Midnight?
Hiroshima Day 2014
By Noam Chomsky

If some extraterrestrial species were compiling a history of Homo sapiens, they might well break their calendar into two eras: BNW (before nuclear weapons) and NWE (the nuclear weapons era). The latter era, of course, opened on August 6, 1945, the first day of the countdown to what may be the inglorious end of this strange species, which attained the intelligence to discover the effective means to destroy itself, but — so the evidence suggests — not the moral and intellectual capacity to control its worst instincts.

Day one of the NWE was marked by the “success” of Little Boy, a simple atomic bomb. On day four, Nagasaki experienced the technological triumph of Fat Man, a more sophisticated design. Five days later came what the official Air Force history calls the “grand finale,” a 1,000-plane raid — no mean logistical achievement — attacking Japan’s cities and killing many thousands of people, with leaflets falling among the bombs reading “Japan has surrendered.” Truman announced that surrender before the last B-29 returned to its base.

Those were the auspicious opening days of the NWE. As we now enter its 70th year, we should be contemplating with wonder that we have survived. We can only guess how many years remain.

Some reflections on these grim prospects were offered by General Lee Butler, former head of the U.S. Strategic Command (STRATCOM), which controls nuclear weapons and strategy. Twenty years ago, he wrote that we had so far survived the NWE “by some combination of skill, luck, and divine intervention, and I suspect the latter in greatest proportion.”

Reflecting on his long career in developing nuclear weapons strategies and organizing the forces to implement them efficiently, he described himself ruefully as having been “among the most avid of these keepers of the faith in nuclear weapons.” But, he continued, he had come to realize that it was now his “burden to declare with all of the conviction I can muster that in my judgment they served us extremely ill.” And he asked, “By what authority do succeeding generations of leaders in the nuclear-weapons states usurp the power to dictate the odds of continued life on our planet? Most urgently, why does such breathtaking audacity persist at a moment when we should stand trembling in the face of our folly and united in our commitment to abolish its most deadly manifestations?”

He termed the U.S. strategic plan of 1960 that called for an automated all-out strike on the Communist world “the single most absurd and irresponsible document I have ever reviewed in my life.” Its Soviet counterpart was probably even more insane. But it is important to bear in mind that there are competitors, not least among them the easy acceptance of extraordinary threats to survival.

According to received doctrine in scholarship and general intellectual discourse, the prime goal of state policy is “national security.” There is ample evidence, however, that the doctrine of national security does not encompass the security of the population. The record reveals that, for instance, the threat of instant destruction by nuclear weapons has not ranked high among the concerns of planners. That much was demonstrated early on, and remains true to the present moment.

In the early days of the NWE, the U.S. was overwhelmingly powerful and enjoyed remarkable security: it controlled the hemisphere, the Atlantic and Pacific oceans, and the opposite sides of those oceans as well. Long before World War II, it had already become by far the richest country in the world, with incomparable advantages. Its economy boomed during the war, while other industrial societies were devastated or severely weakened. By the opening of the new era, the U.S. possessed about half of total world wealth and an even greater percentage of its manufacturing capacity.

There was, however, a potential threat: intercontinental ballistic missiles with nuclear warheads. That threat was discussed in the standard scholarly study of nuclear policies, carried out with access to high-level sources — Danger and Survival: Choices About the Bomb in the First Fifty Years by McGeorge Bundy, national security adviser during the Kennedy and Johnson presidencies.

Bundy wrote that “the timely development of ballistic missiles during the Eisenhower administration is one of the best achievements of those eight years. Yet it is well to begin with a recognition that both the United States and the Soviet Union might be in much less nuclear danger today if [those] missiles had never been developed.” He then added an instructive comment: “I am aware of no serious contemporary proposal, in or out of either government, that ballistic missiles should somehow be banned by agreement.” In short, there was apparently no thought of trying to prevent the sole serious threat to the U.S., the threat of utter destruction in a nuclear war with the Soviet Union.

Could that threat have been taken off the table? We cannot, of course, be sure, but it was hardly inconceivable. The Russians, far behind in industrial development and technological sophistication, were in a far more threatening environment. Hence, they were significantly more vulnerable to such weapons systems than the U.S. There might have been opportunities to explore these possibilities, but in the extraordinary hysteria of the day they could hardly have even been perceived. And that hysteria was indeed extraordinary. An examination of the rhetoric of central official documents of that moment like National Security Council Paper NSC-68 remains quite shocking, even discounting Secretary of State Dean Acheson’s injunction that it is necessary to be “clearer than truth.” Read More