“Studies such as these help us gaze into the uncertain future and ask if that is what we want for our children. Most of us don’t. A few of us actually try to do something to change it. For the rest, the lag time is comforting. The complexity of non-linear feedback systems gives us an excuse to procrastinate.“ 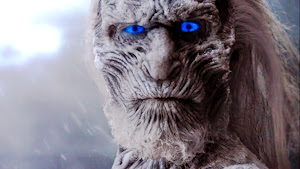 Why are zombies so ubiquitous in contemporary popular culture? The HBO mini-series, Game of Thrones, supplies one theory. Unlike in the AMC series, Walking Dead, or in the film, World War Z, the undead are not coming on like a Blitzkrieg hoard. Rather, the White Walkers are building slowly, as a rumor, sometimes killing the messenger and leaving the message undelivered. “Winter is coming” is an expression that hangs in the air, deepening the sense of foreboding.

One reviewer (for The New York Times) observed that “bringing in the White Walkers might be a way to ultimately point up the pettiness of politics — which is to say, no one cares who sits on what throne once zombies start eating people.”Thrones’ first four seasons of “people slicing, stabbing, axing, poisoning, eating, crushing and moon-dooring one another in every possible context,” underscore the point — that the pettiness of politics still rules the day.

Game of Thrones resonates because outside the window is the drama of NATO expansion bumping up against retired Red Army vets in the Ukraine, the unmasking of shadow banks in the U.K. by the Financial Times and shadowing governments by Edward Snowden, or the sniper battle on the U.S. Republican right that is so entertaining to MSNBC and CNN. It is all much ado about nothing. Just North of our popular culture Wall is a climate juggernaut, building momentum. 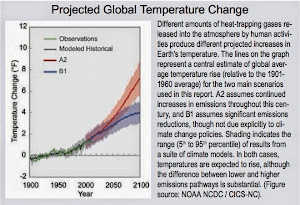 Both scenarios — business as usual and drastic curtailment — produce a temperature and climate regime that would likely be lethal for modern civilization, if not the human race. In the Cancun round of the Committee of Parties in 2010, United Nations high level negotiators produced a general agreement — over the opposition of the USA, Canada, Saudi Arabia, Australia, Israel and other obstructionists — that “recognizing that climate change represents an urgent and potentially irreversible threat to human societies and the planet,” 2°C was the “line in the sand” beyond which global temperatures should not be allowed to climb. In the latest three rounds— Durban, Doha and Warsaw — there has been a strong push from the science and civil sectors to reduce the target to 1.5°C to avert potentially unmanageable risks of tipping points from which no recovery would be possible. Since Warsaw last December some of these points — the inexorable slippage of ice in Antarctica and the release of methane from permafrost to name two — have tipped.

The NCA3 study is saying, essentially, we are in dangerous territory whether we stop emissions tomorrow or not. Summer temperatures in the U.S. have been rising on average 0.4 degrees F per decade since 1970, or about 0.2 C. Average summertime temperature increase has been 1°C overall, but the Southwest and West regions have borne the brunt of those increases, and temperatures have risen an average of 0.4°C, with a few localized areas warming as much as 0.6°C per decade. This is 5 times faster than the Earth as a whole warmed in the 20thcentury. North America, which lags other parts of the planet, is now in an exponential curve of accelerating change

“There are a number of findings in this report that sound an alarm bell signaling the need for action to combat the threats from climate change. For instance, the amount of rain coming down in heavy downpours and deluges across the U.S. is increasing; there’s an increase that’s already occurring in heat waves across the middle of the U.S.; and there are serious observed impacts of sea-level rise occurring in low-lying cities such as Miami, where, during high tides, certain parts of the city flood and seawater seeps up through storm drains. These are phenomena that are already having direct adverse impacts on human well-being in different parts of this country.”

Studies such as these help us gaze into the uncertain future and ask if it is really what we want for our children. Most of us don’t. A few of us actually try to do something to change it. For the rest, the lag time is comforting. The complexity of non-linear feedback systems gives us an excuse to procrastinate. More