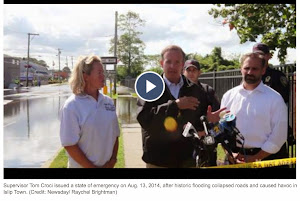 That means that “rainfall of this magnitude is only expected to occur once in a 200-year period,” according to the center's website.

At play was a complex weather system that the National Weather Service had been monitoring for days, warning of the threat of flash flooding, in which an upper level disturbance, a low pressure area at the surface and very moist environment all combined over the area, said Tim Morrin, weather service meteorologist in Upton.

The “bull's-eye” of the heaviest rainfall that deluged an area of western Suffolk was right near MacArthur Airport, he said.

“A very small micro-scale event took place” in that area, one that is yet to be explained, he said, but that will likely be researched extensively, with follow-up papers written. Such a phenomenon is “impossible to forecast,” he said, as “there's not enough skill in the computer models to pinpoint that kind of extreme” on such a small scale.

As for hourly rainfall, 5.34 inches fell from 5 to 6 a.m. Wednesday at the airport in Ronkonkoma, followed by another 4.37 inches from 6 to 7 a.m., according to the Climate Center. They may have come back-to-back, but each is considered a 500-year event, said Jessica Spaccio, a climatologist with the center, which is at Cornell University.

Records were also broken, and, “when we break a state record, that's pretty exciting,” Spaccio said

According to a preliminary report from the weather service, the previous New York State record for precipitation in a 24-hour period was broken. That was set Aug. 27 to 28, 2011, in Tannersville when 11.6 inches fell during what the service referred to as Hurricane/Tropical Storm Irene.

With half the month still to go, Wednesday's rainfall also resulted in a record for the month of August, previously 13.78 inches set in 1990, the weather service said. The airport's August rainfall now stands at 13.88 inches, said the weather service, which has maintained official records for the airport for the past 30 years.

While Long Island has been considered “abnormally dry” this year by the U.S. Drought Monitor, the 13.27 inches at the airport in just about one day exceeded normal rainfall for June, July and August combined — 11.68 inches — based on precipitation records from 1981 to 2010, according to the Climate Center.

And as for the record rainfall for Aug. 13 — beating that was a piece of cake, with the previous record for that day 0.91 inches, set in 2013, the weather service said.

As for hourly rainfall amounts — top honors now go to Wednesday from 5 to 6 a.m. when 5.34 inches fell at the airport, followed by 4.37 inches the very next hour, Spaccio said. The highest previous amount was 2.64 inches, which fell in one hour on July 18, 2007. That's based on data maintained since July 1996, she said. More