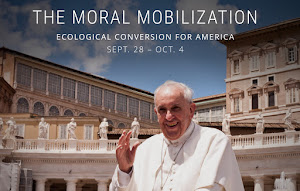 The Pledge to Mobilize is a tool to achieve this ecological conversion — on the individual and national level.

The Pledge to Mobilize calls on the federal government to convert the American economy to net zero greenhouse gas emissions by 2025 through an emergency, WWII-scale mobilization.

On Tuesday, the British medical journal The Lancet will publish a landmark report highlighting the inalienable and undeniable link between climate change and human health.

We warmly welcome the report’s message of hope, which confirms the fact that climate change is more than just a technical or financial challenge (as Pope Francis did in his encyclical letter on June 18) and confirms the voice of health in the discussion on climate change. Indeed, the central premise of the Lancet commission’s work is that tackling climate change could be the single greatest health opportunity of the 21st century.

It is no surprise that climate change has the potential to set back global health. The greenhouse gas emissions that are warming our planet come from industrial activity that pollutes our air and water, and the temperature changes may lead to drought that brings malnutrition. Those with little or no access to health care — children and the elderly in particular — are more vulnerable to such predicaments.

However, health is symptomatic of a larger problem, which undermines and fragments our broader worldview. In addition to highlighting the effects of climate change, we must address the root of the problem. In so doing, we will discover how the benefits of assuming moral responsibility and taking immediate action — not just on matters related to health, but also world economy and global policy — far outweigh the cost of remaining indifferent and passive.

It is this vital link that The Lancet’s report conclusively and authoritatively demonstrates. In short, it proves that our response to climate change — both in terms of mitigation and adaptation — will reduce human suffering, while preserving the diversity and beauty of God’s creation for our children. God’s generous and plentiful creation, which we so often take for granted, is a gift to all living creatures and all living things. We must, therefore, ensure that the resources of our planet are — and continue to be — enough for all to live abundant lives.

The report could not appear at a more significant and sensitive time in history. This year, as all eyes look ahead to the Paris climate negotiations and as governments prepare to sign a universal commitment to limit global temperature rises, we have reached a critical turning point. We are — as never before — in a position to choose charity over greed and frugality over wastefulness in order to affirm our moral commitment to our neighbor and our respect for the Earth. Basic human rights — such as access to safe water, clean air and sufficient food — should be available to everyone without distinction or discrimination.

Because of our faith in God as creator, redeemer and sustainer, we have a mission to protect nature as well as human beings. The obligation of all human beings is to work together for a better world, one in which all human beings can flourish; our Christian vocation is to proclaim the Gospel inclusively and comprehensively.

To this purpose, as early as the mid-1980s, when the faith-based environmental movement that has come to be known as creation care was neither political nor fashionable, the Ecumenical Patriarchate initiated pioneering environmental initiatives. In 1989, it established a day of prayer for the protection of the natural environment and, from 1991 to this day, instigated a series of symposia and summits on an international, interfaith and interdisciplinary basis. Its ecumenical and ecological vision has been embraced in parishes and communities throughout the world.

In 1984, the Anglican Consultative Council adopted the Five Marks of Mission, the fifth of which is: “To strive to safeguard the integrity of creation, and sustain and renew the life of the earth.” In 2006, the Church of England started a national environmental campaign, Shrinking the Footprint, to enable the whole church to address — in faith, practice and mission — the issue of climate change. In 2015, a clear direction has been set for the Church of England’s national investing bodies in support of the transition to a low-carbon economy that brings its investments into line with the church’s witness.

As representatives of two major Christian communions, we appeal to the world’s governments to act decisively and conscientiously by signing an ambitious and hopeful agreement in Paris during the United Nations’ climate conference, COP 21, at the end of this year. We hope and pray that this covenant will contain a clear and convincing long-term goal that will chart the course of decarbonization in the coming years. Only in this way can we reduce the inequality that flows directly from climate injustice within and between countries.

The Lancet report is further proof that all of us must act with generosity and compassion toward our fellow human beings by acting on climate change now. This is a shared moral responsibility and urgent requirement. Civil society, governmental authorities and religious leaders have an opportunity to make a difference in a way that bridges our diverse opinions and nationalities. More