Is the Ferguson Movement the begining of a Nationwide Movement driven by Racism and Economic Disparity? 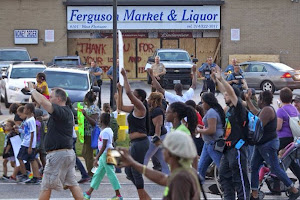 In the eight days since Michael Brown, an eighteen-year-old, was killed by a police officer named Darren Wilson in Ferguson, Missouri, what began as an impromptu vigil evolved into a sustained protest; it is now beginning to look like a movement. The local QuikTrip, a gas station and convenience store that was looted and burned on the second night of the protests, has now been repurposed as the epicenter for gatherings and the exchange of information. The front of the lot bears an improvised graffiti sign identifying the area as the “QT People’s Park.” With the exception of a few stretches, such as Thursday afternoon, when it was veiled in clouds of tear gas, protesters have been a constant presence in the lot. On Sunday afternoon the area was populated by members of local churches, black fraternity and sorority groups, Amnesty International, the Outcast Motorcycle Club, and twenty or so white supporters from the surrounding area. On the north side of the station, a group of volunteers with a mobile grill served free hot dogs and water, and a man stood on a crate, handing out bright yellow T-shirts with the logo of the National Action Network, the group led by Al Sharpton.

The conversation here has shifted from the immediate reaction to Michael Brown’s death and toward the underlying social dynamics. Two men I spoke with pointed to the disparity in education funding for Ferguson and more affluent municipalities nearby. Another talked about being pulled over by an officer who claimed to smell marijuana in the car as a pretense for searching him. “I’m in the United States Navy,” he told me. “We have to take drug tests in the military so I had proof that there were no drugs in my system. But other people can’t do that.” Six black men I spoke to, nearly consecutively, pointed to Missouri’s felon-disfranchisement laws as part of the equation. “If you’re a student in one of the black schools here and you get into a fight you’ll probably get arrested and charged with assault. We have kids here who are barred from voting before they’re even old enough to register,” one said. Ferguson’s elected officials did not look much different than they had years earlier, when it was a largely white community.

Ferguson had, instead, recently seen two highly visible African-American public officials lose their jobs. Two weeks before Brown was shot, Charles Dooley, an African-American who has served as St. Louis County Executive for a decade, lost a bitter primary election to Steve Stenger, a white county councilman, in a race that, whatever the merits of the candidates, was seen as racially divisive. Stenger lobbed allegations of financial mismanagement and incompetence, and worse. Bob McCulloch, the county prosecutor appeared in an ad for Stenger, associating Dooley with corruption; McCulloch would also be responsible for determining whether to charge Darren Wilson. In December, the largely white Ferguson-Florissant school board fired Art McCoy, the superintendent, who is African-American. Those who were gathered at the QuikTrip parking lot on Saturday were as inclined to talk about the underlying political issues as they were about the hail of bullets that ended Brown’s life.

When word came that afternoon that the governor had announced a curfew, to take effect at midnight, the mood shifted to defiance and disbelief. Few thought that the curfew would do much practical good; many thought it was counterproductive, a move back to militarized police response earlier in the week. Curfew or no, the protesters felt that, with the exception of last Thursday, when Captain Ron Johnson of the Missouri State Highway Patrol, a black Ferguson native, took charge of operations, the amalgam of county and local law enforcement rolling through Ferguson had tried to clear the streets each day at dusk.

On Johnson’s first night in charge, the police presence in the neighborhood was hardly visible; officers withdrew to the perimeter and removed a roadblock that had cut off Florissant Road, which runs just south of the QuikTrip. The protests that night had a giddy quality. Cars drove up and down the strip, the sounds of honking horns accompanying shouts of Brown’s name and “Hands Up, Don’t Shoot,” which has emerged as the signature slogan here.

But as early as Friday morning people began to wonder if Johnson really was in charge, in any meaningful way. Ferguson Police Chief Thomas Jackson began the day by releasing Officer Wilson’s name, which had been kept from the public until then. He undercut that gesture by simultaneously releasing a video that appeared to show Brown menacing a local store owner soon before his encounter with Wilson—thus suggesting that Wilson had been pursuing Brown as a suspect. It took a few hours, and a second press conference, for Jackson to acknowledge that Wilson hadn’t stopped Brown because he thought he was a robber but because Brown was walking in the street and not, as Wilson believed he should, on the sidewalk.

Ron Johnson had to concede that he had not even known that the video would be released; he saw it on television just as everyone else had. (“I would like to have been consulted,” he said at his own press conference.) After sporadic looting on Saturday night—halted largely by other protestors who rushed to protect the establishments being vandalized—Governor Jay Nixon declared a curfew, further undercutting Johnson’s authority. In the span of twenty-four hours, Johnson had gone, in the community’s eyes, from empowered native son to black token. One of the local activists I’d met in Feguson sent me a text message after the curfew announcement saying, “Johnson has good intentions but no power. This is beyond him.”On Sunday, Johnson stepped into the pulpit at Greater Grace Church, the site of a rally, and apologized to Brown’s family, saying, “I wear this uniform and I feel like that needs to be said.” With that, he implicitly condemned the Ferguson Police Department for their failure to do so. Johnson had promised not to use tear gas in the streets of Ferguson but, during a skirmish with looters on Saturday night, police tear-gassed the crowd. Johnson’s address at the church carried the message that his allegiances were, nonetheless, with the people of Ferguson. James Baldwin remarked that black leaders chronically find themselves in a position of asking white people to hurry up while pleading with black people to wait. Johnson finds himself asking black people to remain calm while imploring white police officers not to shoot. The problem here is that few people in Ferguson believe that the former is any guarantee of the latter.

Brown remains unburied. His family, whose faith evaporated early on, refused to simply trust the autopsy performed by local authorities and held out for a second post mortem, by federal authorities. Attorney Eric Holder granted that request late Sunday morning. It might produce a definitive answer to some of the basic questions—like how many times Brown was shot, and whether any of the bullets hit him in the back—that, a week later, remain murky. From the outset, the overlapping bureaucracies in Ferguson handled the case in ways that suggested ineptitude. Yet subsequent developments—the stonewalling followed by contradictory statements, the detention of reporters, the clumsy deployment of sophisticated military equipment—all point not to a department too inept to handle this investigation objectively but one too inept to cloak the fact that they never intended to do so. One protestor held a sign that said, “Ferguson Police Need Better Scriptwriters.” More

In an article by Alex Kane entitled 11 Eye-Opening Facts About America’s Militarized Police Forces the author writing in AlterNet states; The “war on terror” has come home — and it’s wreaking havoc on innocent American lives. The culprit is the militarization of the police.

The weapons that destroyed Afghanistan and Iraq have made their way to local law enforcement. While police forces across the country began a process of militarization — complete with SWAT teams and flash-bang grenades — when President Reagan intensified the “war on drugs,” the post-9/11 “war on terror” has added fuel to the fire.

Through laws and regulations like a provision in defense budgets that authorizes the Pentagon to transfer surplus military gear to police forces, local law enforcement agencies are using weapons found on the battlefields of South Asia and the Middle East.

A recent New York Times article by Matt Apuzzo reported that in the Obama era, “police departments have received tens of thousands of machine guns; nearly 200,000 ammunition magazines; thousands of pieces of camouflage and night-vision equipment; and hundreds of silencers, armored cars and aircraft.” The result is that police agencies around the nation possess military-grade equipment, turning officers who are supposed to fight crime and protect communities into what looks like an invading army. And military-style police raids have increased in recent years, with one count putting the number at 80,000 such raids last year.

In June, the American Civil Liberties Union (ACLU) brought more attention to police militarization when it issued a comprehensive, nearly 100-page report titled, War Comes Home: The Excessive Militarization of American Policing. Based on public records requests to more than 260 law enforcement agencies in 26 states, the ACLU concluded that this police militarization “unfairly impacts people of color and undermines individual liberties, and it has been allowed to happen in the absence of any meaningful public discussion.”

The information contained in the ACLU report — and in other investigations into the phenomenon — is sobering. From the killing of innocent people to the almost complete lack of debate on these policies, police militarization has turned into a key issue for Americans. It is harming civil liberties, ramping up the “war on drugs,” impacting the most marginalized members of society and transforming neighborhoods into war zones. Here are 11 important — and horrifying — things you should know about the militarization of police. More

One has to question the reason for militatising the police departments in the United States and where this is leading? Is the government expecting insurrection or invasion? Are their citizens now enemies of the state? Editor