by caribbeanclimate, caribbeanclimateblog.comSeptember 2: Over 150 delegates and members of the international development community from more than 45 countries were stunned to see leader after leader approach the podium to sign a historic sustainable energy and climate resilient treaty that will significantly change the lives and destiny of over 20 million small islanders, for the better.

Led by the Deputy Prime Minister of Samoa, Hon. Fonotoe Nuafesili Pierre Lauofo, multiple leaders from the Pacific, Caribbean and African, Indian Ocean and Mediterranean Sea (AIMS) regions, forcefully raised their voices in unison and accepted responsibility for fulfilling the commitment to the Small Island Developing States (SIDS) Sustainable Energy mechanism – SIDS DOCK. The opening for signature of this historic SIDS DOCK Treaty – a SIDS-SIDS Initiative – was a major highlight of the first day of the United Nations (UN) Third International Conference on SIDS, taking place in Apia, Samoa, from 1-4 September.

The unprecedented and unexpected number of Heads of State and Government present, sent a strong signal to the standing room only audience, the SIDS population and the international community, demonstrating how deeply committed SIDS leaders are and that they all firmly believe that SIDS must, have and will take responsibility for charting the future of their countries towards a path that would see a total transformation of the SIDS economy away from fossil fuels, to that of one driven by low carbon technologies. The event was considered so important to the Republic of Cabo Verde, that the Prime Minister, Hon. José Maria Neves, excused himself and his entire delegation from the Plenary Hall, to ensure that Cabo Verde, a SIDS DOCK Founding Member was well-represented at the signing – the Cabo Verde Government has one of the most ambitious plans in SIDS, that aims to achieve 100 penetration of renewable energies in Cabo Verde, by 2020.

More than half the members of the Alliance of Small Island States (AOSIS) were present for the signing of the historic treaty, witnessed by the SIDS DOCK partners Denmark, Japan and Austria, whose kind and generous support facilitated SIDS DOCK start -up activities; also present were SIDS DOCK partners, the United Nations Development Programme (UNDP), the World Bank, the United Nations Industrial Development Organization (UNIDO) and the Clinton

A new Climate Central report shows which U.S. cities’ fates are locked in by sea-level rise. The long list of 1,400 cities includes not only obvious coastal candidates like Miami and New Orleans, but also inland cities such as Sacramento. They’re doomed to drown by 2100 even if carbon emissions immediately—like right now—drop to zero. 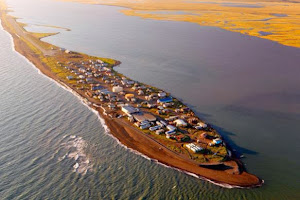 Representative Henry Waxman (D-CA), a longstanding climate champion, tells TakePart: “As this report makes clear, climate change is no longer an issue for ‘later.’ Climate change is already affecting the United States and the window for effective action is closing fast. We must act now to protect the planet for our children and future generations.”

Ben Strauss, one of the scientists behind the new report, began with a study that found for every degree Fahrenheit of global warming due to carbon pollution, global average sea-level will rise by about 4.2 feet in the long run. When multiplied by the current rate of carbon emissions, and the best estimate of global temperature sensitivity to pollution, this translates to a long-term sea-level rise commitment that is now growing at about one foot per decade. Strauss then analyzed the growth of the locked-in amount of sea-level rise and plotted it against a map of the United States.

Carbon pollution to date has already locked in more than four feet of sea-level rise past today’s levels, Strauss finds. That’s enough, at high tide, to submerge more than half of today’s population in 316 coastal cities and towns, home to 3.6 million people, in the lower 48 states.

“We have two sea levels: the sea level of today, and the far higher sea level that is already being locked in for some distant tomorrow,” Strauss writes.

“In Rhode Island, we’ve already seen almost 10 inches of sea-level rise at the Newport tide gauge since the 1930s, making coastal communities more vulnerable to floods, erosion, and the kind of property damage we saw during Hurricane Sandy. We must take immediate steps to limit the carbon pollution that is contributing to sea-level rise, and help coastal areas prepare for new realities,” Senator Sheldon Whitehouse tells TakePart.

To the surprise of absolutely no one who has seen An Inconvenient Truth, Florida is the most threatened state. Louisiana, North Carolina, and New Jersey are also high on the list. Strauss didn’t consider the impact of armoring or defending cities in preparing his report, but notes that New Orleans may be defensible through sea walls, while Miami is indefensible because of its porous bedrock geology.

Although California’s Sacramento and Stockton are thought of as inland cities, they’re connected to the Pacific Ocean through the Sacramento-San Joaquin Delta, a complex maze of marshes and levees. By 2040, 25 percent of Stockton will be underwater at high tide. By 2060, the same will be true of Sacramento, California’s state capitol. Coastal California cities such as Huntington Beach, the original Orange County Surf City, and Palo Alto, home of Stanford University, will likewise be inundated.

Other cities projected to be 50 percent underwater: Galveston, Texas, by 2030; Norfolk, Virginia; and Coral Gables, Florida, by 2044. More