EXECUTIVE SUMMARY
Corruption has been identified as one of the most important problems facing the world today. 1 It is a world-wide problem that became an increasing concern in the early 1990s. Since then, addressing corruption has become increasingly urgent. Corruption exists across the public and private sectors; the International Monetary Fund (IMF) estimates that bribery alone siphons between US$1.5 trillion and US$2 trillion annually from the global economy (two per cent of global GDP). 2 Corruption has a significant negative effect on human and economic development, as it hinders economic growth, results in lost tax revenues, and contributes to sustained poverty. It can also erode public trust and confidence in governments and can stifle progress and innovation.
Given the extent of corruption, major development and capacity building institutions including the IMF, United Nations, the Organization for Economic Co-operation and Development, Transparency International and the World Bank have been encouraging and supporting countries across the world to do more to strengthen their governance, accountability and transparency arrangements with the aim of eliminating corruption.
The Cayman Islands is not immune to corruption. Since 2011, there have been around 13 high-profile cases of fraud and corruption involving public servants; over the last two years, nine cases of alleged fraud and corruption in the public sector have been reported and are being investigated. Widespread corruption creates a significant reputational risk for the Cayman Islands if government is seen to be ineffective in tackling fraud and corruption.
Since 2007, consecutive governments have introduced measures aimed at combatting fraud and corruption, including passing legislation, setting up anti-corruption bodies and strengthening government policies and procedures. However, actions have not yet been extended across the wider public sector; and it is not yet clear how effective the framework is at preventing corruption.
This audit focuses on the institutional framework for fighting corruption at the national level and within the infrastructure sector, with emphasis on the three planning entities: the Cayman Islands Government’s Department of Planning, Central Planning Authority (CPA) and Development Control Board (DCB). We selected this sector because it is integral to the country’s development and economic prosperity and because there are significant numbers of major infrastructure developments (both public
1 2013 World Independent Network/Gallup International annual survey covering 65 countries.
2 IMF Staff Discussion Note – Corruption: Costs and Mitigating Strategies, International Monetary Fund, May 2016 https://bit.ly/2LZRp2m
Fighting Corruption in the Cayman Islands and private sector) currently underway in the Cayman Islands. We have also previously recommended that the National Development Plan be updated to provide a strategic approach to infrastructure in the Cayman Islands.3
The objective of the audit was to assess the effectiveness of the mechanisms for preventing corruption at the national level and within the infrastructure sector. Specifically, we attempted to answer the following audit questions:
• How well-designed is the national framework to prevent corruption?
• How effective is the national framework in preventing corruption at the national level?
• How well-equipped is the infrastructure sector to prevent corruption?
KEY MESSAGES
The Government has made progress in developing a national framework for countering corruption. This includes enacting a range of legislation, the main component being the Anti-Corruption Law. However, some of the legislation has only recently come into force, and some has yet to come into force. https://bit.ly/2NCtqqA

KARACHI: On the outskirts of the slums of Pakistan’s biggest city, protesters burning tires and throwing stones have what sounds like a simple demand: They want water at least once a week. 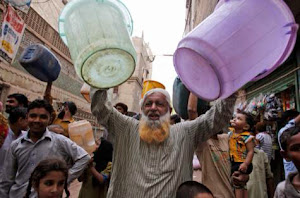 In Karachi people go days without getting water from city trucks, sometimes forcing them to use groundwater contaminated with salt. A recent drought has only made the problem worse. And as the city of roughly 18 million people rapidly grows, the water shortages are only expected to get worse.

“During the last three months they haven’t supplied a single drop of water in my neighbourhood,” protester Yasmeen Islam said. “It doesn’t make us happy to come on the roads to protest but we have no choice anymore.”

Misbah Fareed, a senior official with the Karachi Water and Sewerage Board that runs the city’s water supplies, said that only meets about half the city’s needs — 1.2 billion gallons a day.

Karachi’s water distribution network has exacerbated the problem by forcing much of the city to get its water through tankers instead of directly from pipes. The Karachi Water and Sewerage Board operates 12 water hydrants around the city where tankers fill up and then distribute. Even people in the richest areas of the city get their water through tankers that come a few times a week to fill up underground cisterns.

But criminals have illegally tapped into the city’s water pipes and set up their own distribution points where they siphon off water and sell it.

“I personally know some people previously associated with drug mafias who now switched to the water tanker business,” Fareed said. “Just imagine how lucrative the business is.”

Other areas of Pakistan pump massive amounts of groundwater. But in the coastal city of Karachi, the underground water is too salty to drink. Many people have pumps but they use the water for things such as showering or washing clothes.

The water shortage is exacerbated by Karachi’s massive population. Pakistani military operations and American drone strikes in the northern tribal regions, as well as natural disasters such as flooding and earthquakes, have pushed people toward a city long seen as the economic heart of Pakistan.

The city is trying to increase the amount of water it gets from the Indus River by building another canal — dubbed the K4 project. But even if they were to get political approval from the capital to take more water from the river, it would take a minimum of four years to build.

But analysts say supply isn’t the only problem. Farhan Anwar, who runs an organisation called Sustainable Initiatives in Karachi, said the Karachi Water and Sewerage Board is horribly overstaffed and many of those are political appointees. The cost for water is also very low and the agency doesn’t collect all that it’s due, Anwar said. That’s made it difficult to upgrade the ageing pipes the system does have, meaning contamination and leakages are common.

Meanwhile, Karachi residents have to spend more money or walk further and further to get water. One elderly resident Aisha Saleem said in recent months even the little water they get from the water board is salty.

“Women and kids have to go miles by foot and carry drinking water every day,” she said More