Developing countries have much to learn from Lee Kuan Yew, the first prime minister of Singapore who transformed the republic from a third world economy to one of the most advanced countries in one generation. 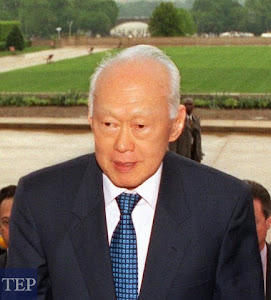 The lessons for countries aspiring to learn from the Singapore development model are clear – strengthen institutions and improve governance.

But this is much easier said than done. To begin with aspiring countries need to improve the rule of law so that no one is above the law of the land. Equally crucial, they need to reduce corruption as corruption is regressive – small and medium-sized firms pay higher amounts in bribes than large firms.

Thirdly, they need to reform public institutions such as the civil service, bureaucracy, and public administration. Fourthly, they also need to improve the environment affecting the private sector through regulatory reforms, reforms of labour markets, and provision of clearly-defined property rights.

The dilemma is that such reforms generate benefits only in the longer term, making them hard for policymakers and politicians with a shorter time horizon to set as priorities. Yet without them, other policy measures to support sustained economic growth will become less effective and ultimately unravel.

The Singapore model of good governance is well-recognised. Development theorists of the past were of the view that economic development could be explained solely by factors like the availability of natural resources, high levels of saving and investment, and openness to foreign trade and investment.

More recently, the Growth Report published in 2008 by the Commission on Growth and Development headed by Nobel laureate Michael Spence has found that an additional factor has also to be good governance, based on mainly Singapore’s development experience under Lee.

As Senior Minister Goh Chok Tong, who participated in the Commission, puts it, for a delicious dish “besides having the right ingredients and the right recipe, you must have a master chef”.

Economic development does not just happen. It must be consciously chosen as an overarching goal by the government.

Good governance means a government that delivers political and economic stability, implements the correct macroeconomic policies, articulates a vision for the country and implements it.

This requires a capable, committed, and credible government, governments that people can trust in, and leaders who are above the board. An abundance of natural resources is neither necessary nor sufficient for a country’s economic development. What is required is good governance.

A case of good governance is Lee’s choice of the Singapore development model in the 1960s and beyond.

After the separation from Malaysia in 1965, Singapore was similar to a typical developing country of today. GNP per capita was about US$300, unemployment rates were high, and racial disharmony was rife. The announcement by the British in 1968 that they would withdraw their forces from Singapore was also expected to aggravate the unemployment situation further. How should jobs be created?

As the prime minister of a small country, Lee was always thinking big and making bold decisions in the interest of the country. Mr Lee adopted a development model based on export of labour-intensive manufactured goods to world markets. Lee invited multinational companies from all over to invest heavily in Singapore. Produce in Singapore and sell to the world, he told them.

To provide an attractive investment environment, the government built the appropriate infrastructure, cut tariffs and quotas, offered tax incentives, and implemented appropriate macroeconomic policies. The Economics Development Board (EDB) Singapore was established in 1961 to provide a business friendly environment to foreign investors and to convince them that Singapore was a good place to invest.

The National Wages Council (NWC) was also established in 1972 to make sure that the benefits of foreign investment were shared and also to accelerate Singapore’s move up the development ladder. Mr Lee also met foreign investors regularly and listened to them and their grievances.

The dependency theorists, in particular, argued that foreign investors from developed countries typically exploit cheap labour and extract natural resources of the developing countries. It is only after the success of the Singapore development model that export-oriented development strategies driven by foreign investment has been popularly adopted all over the world.

‘It’s not how you start but how you arrive’

In the 1980s and the 1990s the type of investment Singapore sought to attract shifted gradually from labour-intensive industries (eg, garments, textiles, and wigs) towards more high-tech and knowledge-based industries (eg, chips, wafer fabs, and disk drives).

Lee noted that, since the unemployment problem had been overcome, the new challenge was “how to improve the quality of the new investments and with it the education and skill levels of our workers”.

Lee’s attempt to make Singapore the Asian financial centre and global business hub is also bold. Unable to compete with Hong Kong then, Lee tried especially hard to convince foreign bankers and international financial institutions to come to Singapore by establishing integrity, efficiency, the rule of law, reliability, and stability.

In his words, “[the] history of our financial centre is the story of how we built up credibility as a place of integrity, and developed the officers with the knowledge and skills to regulate and supervise the banks, security houses and other financial institutions….”

Overall, Mr Lee’s development strategy which focused on strengthening institutions and improving governance was successful. Other developing countries will, however, face difficulties in adopting this strategy.

A case in point is South Asia. Countries in this region had begun their reform programmes in the early 1990s by focusing on macroeconomic areas – monetary and fiscal reforms, and industrial deregulation – which had contributed to a more rapid economic growth.

These reforms, however, eventually ran out of steam – because of red tape, endemic corruption, and lack of rule of law – and have contributed to the recent economic slowdown. Lee’s model followed his dictum, which he shared with the King of Bhutan: “It’s not how you start the journey that counts, but how you arrive.” More