A generation ago Ethiopia’s Tigray province was stricken by a famine that shocked the world. Today, as Chris Haslam reports, local people are using ancient techniques to turn part of the desert green. 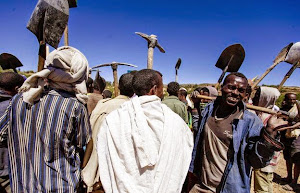 In the pink-streaked twilight, a river of humanity is flowing across Tigray’s dusty Hawzien plain. This cracked and desiccated landscape, in Ethiopia’s far north, occupies a dark corner of the global collective memory. Thirty years ago, not far from here, the BBC’s Michael Buerk first alerted us to a biblical famine he described as “the closest thing to hell on earth”.

Then Bob Geldof wrote Do They Know It’s Christmas? – a curious question to ask of perhaps the world’s most devoutly Christian people – and thereafter the name Tigray became synonymous with refugees, Western aid and misery. The Tigrayan people were depicted as exemplars of passive suffering, dependent on the goodwill of the rest of the planet just to get through the day without dying.

But here, outside the village of Abr’ha Weatsbaha, I’m seeing a different version. From all directions, streams of people are trickling into that human river. You hear them before you see them – some chatting excitedly, others singing hymns – as they converge on a viciously steep valley at the edge of the plain. They were summoned before dawn by horns, an Old Testament echo calling every able-bodied man and woman over 18 years of age to report for the first of 20 days of compulsory community labour. Their job, quite simply, is to tame the desert.

“This is how the Axumite kings got stuff done 2,000 years ago,” says my guide Zablon Beyene. “With the same tools, too.

By 10 in the morning, some 3,000 people have turned up. Using picks, shovels, iron bars and their bare hands, they will turn these treacherous slopes into neat staircases of rock-walled terraces that will trap the annual rains, forcing the water to percolate into the soil rather than running off in devastating, ground-ripping flash floods.

“Sisters are doing it for themselves,” says Kidane, a pick-wielding Amazon whose arched eyebrow suggests I might want to put down my camera and do some actual work. Brothers, too: from strapping, sweat-shiny youths to Ephraim, a legless old man who clearly ignored the bit about being able-bodied and sits on his stumps, rolling rocks downhill to the terrace builders.

Overseeing this extraordinary effort is 58-year-old Aba Hawi, Abr’ha Weatsbaha’s community leader. Short, pot-bellied and bearded, he darts from one side of the valley to the other, barking orders into his mobile phone, slapping backs and showing the youngsters the proper way to split half-ton boulders. Rumour has it that Aba Hawi once took up arms to fight for Tigrayan independence, but these days he prefers to describe himself as “just a farmer”.

Either way, his tireless leadership has brought a miraculous transformation to this sun-blasted land. In just a decade, entire mountains have been terraced. Once you had to dig 50ft (15m) down to find water. Now it’s just 10ft, and 94 acres (38 hectares) of former desert have been transformed into fertile fields. Families are now reaping three harvests a year from fields of corn, chillis, onions and potatoes. Free-range grazing for sheep, goats and cattle has been banned, allowing new forests of eucalyptus and acacias to take root, and Aba Hawi is particularly keen to show me what he’s done with the deep flash-flood canyons that rive the plain.

We take a long, hot hike to a vast pool of cool, green water held back by a huge hand-built dam. “We’ve built 85 of these check-dams so far,” says Aba Hawi, “and you can see how they work. These mini-reservoirs fill up during the rains and are fed by groundwater in times of drought. Now, every farmer has a well.” He tosses a handful of dust into the wind. “Ten years ago, that was our land.” Then he points at a shimmering blue flash in the reeds. “Now look: we’ve got malachite kingfishers living in the desert.”

But success brings its own problems. Abr’ha Weatsbaha is now facing an immigration problem as people from neighbouring valleys clamour for their share of Aba Hawi’s oasis.

“They shouldn’t need to come here,” he says. “Every district in Tigray is supposed to be using compulsory community labour for terracing but, well…” he shrugs with just a tad of false modesty… “not all community leaders are so, er, committed.”

I’m interested in his views of where God comes into all this. After all, this valley was once the physical definition of the term “Godforsaken.”

Aba Hawi disagrees. “God was here when the land was bad,” he says. “And he’s still here. But God will only help those who help themselves.” More