So says a protester walking though the streets of Sao Paul as water service is being drastically cut due to a relentless drought in Brazils most populous state. The 20 million people that live in Sao Paulo, Brazil have run out of water and things are starting to get ugly really fast. 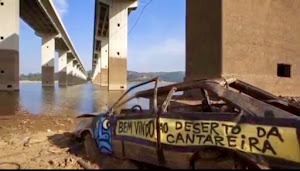 Secretly recorded, Paulo Massato, the metropolitan director of the São Paulo state-run water utility, said that people might have to flee the city. “There's not enough water, there won't be water to bathe, to clean,” says Massato. Fears of what comes next has begun and thousands took to the streets recently walking from the poor neighborhoods and marching past wealthy residential towers most of which have their own water tanks, to the Bandeirantes Palace in Morumbi, where the official residence of the governor (State of Sao Paolo Geraldo Alckmin) is located.

A demonstrator holds up a bucket with a sign reading “Water, Yes,” in reference to water rationing in Sao Paulo January 29, 2015. Residents of Brazil's largest city, Sao Paulo, could soon only have running water two days a week. (REUTERS/Nacho Doce)

São Paulo, along with 93 smaller localities around Brazil, is facing drastic water shortages that could mean up to five days a week without running water starting in April. The mega-city’s largest reservoir, which supplies about 30 percent of the 20 million people living in the metropolitan region, is currently at only 5.1 percent of its capacity. It’s all the result of a severe drought that has extended throughout Brazil’s Southeastern region, and could soon lead to water rationing for as much as 40 percent of the population.

Aside from practical residential concerns, the shortage has affected industry and agriculture across the region, including the production of hydroelectricity, a key component of Brazil’s power grid. Even the carnaval is threatened—celebrations have been cancelled in some dry municipalities and the Río samba groups are altering their choreography to eliminate traditionally prominent water us.

The latest must-have item in the city is a rainwater cistern. A local group created in October, Cisterna Já, teaches city residents how to make their own mini-cisterns, allowing them to cut back on increasingly expensive and scarce public water supplies.

Consumption in the metropolitan region has already been reduced by a quarter, according to the president of Sabesp, the city’s water utility. Yet the main water loss culprit isn’t long showers, but rather leaky pipes. In order to address the problem, he explained in a recent op-ed, about 64,000 kilometers of buried pipes would have to be replaced.

Experts say they are concerned there is little practical preparation for upcoming shortages and argue that few relevant policy measures are being put into place.

The roots of the water shortage can be traced back to deforestation and industrialization across the region, according to Marcos Sorrentino, a professor of education and environmental policy at the University of São Paulo. A lack of political will to address the problem has led São Paulo to maintain a system of wasteful water distribution and consumption, and the city has missed opportunities to implement water saving and reuse technologies, Sorrentino says.

Residential water use only accounts for an estimated 6 percent of water usage in the region, which means that even if Paulistas stopped bathing altogether they won’t be able to resolve the “crisis de agua,” as it’s called locally. “Agriculture and industry, the biggest consumers, are only now being mobilized to commit to reducing consumption,” says Sorrentino.

A recent study found that 95 percent of businesses, industries, hospitals and hotels in the state of São Paulo don’t have a water supply contingency plan. “Lack of water will certainly compromise the operations of places that depend on the public water system,” says Rodnei Domingues, the study’s coordinator.

Sorrentino is particularly concerned about the drought’s impact on food prices, and notes that there have already been several water shortage-related protests. “The discontent of the population of the cities in which rationing has started is very large and it is not difficult to predict effects on public health and the expansion of urban violence,” he says.

The drought began last austral summer (December to February), when São Paulo state received about one-third to half of its usual amount of rain during what should have been its wettest season. In the seven months since, rainfall has been about 40 percent of normal. Across southeastern Brazil, production of key crops like coffee and sugar are in steep decline, and citizens are facing periodic outages in the water supply—even as news agencies report that local water authorities have not instituted conservation measures.

“The climate of the region is seasonal, with a rainy summer and a dry winter, and the drought has extended through the current dry season and the past rainy season,” noted Marcos Heil Costa, climate scientist at the Universidade Federal de Viçosa. “To make things worse, the onset of the rainy season—which usually happens in late September or early October—has not happened yet.”

“For the last rainy season, the pattern [of reduced rainfall] has been observed in the past, though the intensity was unprecedented this year,” Costa added. “For the dry season, coincidence or not, it looks exactly like what has been predicted by IPCC for a warmer climate. And it is now clear that our policies on management of water resources are unsustainable. No city in southeast Brazil seems prepared to handle a drought like this one. It is a mix of a lack of preparation for low levels of rain and a lack of environmental education in the population. Most people continue to use water as if we were in a normal year.” More