Agriculture and food security are exposed to impacts and risks related to the changing climate in several ways. On the other hand, agriculture and food production activities are also responsible for part of the greenhouse gas emissions that in turn cause climate change. 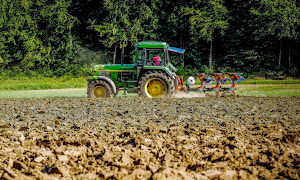 According to the latest conclusions by the Intergovernmental Panel on Climate Change, agriculture, together with deforestation and other human actions that change the way land is used (codename: AFOLU, Agriculture, Forestry and Other Land Use), accounts for about a quarter of emissions contributing to climate change.

During the last ten years covered by FAO data (2001-2011) agricultural emissions increased by 14 percent (primarily in developing countries that expanded their agricultural outputs), while almost in the same years (2001-2010) net GHG emissions due to land use change and deforestation decreased by around 10 percent (due to reduced levels of deforestation and increases in the amount of atmospheric carbon removed from the atmosphere as a result of carbon sequestration in forest sinks).

The current situation, as highlighted by a recent study led by FAO and published in Global Change Biology, sees farming activities more responsible for climate pollution than deforestation. Even thought emissions from agriculture and land use change are growing at a slower rate than emissions from fossil fuels, emissions reduction achieved thanks to better forest and soil management are cancelled out by a more intensive and energy-consuming food production systems. The FAO estimated that without increased efforts to address and reduce them, GHG emissions from the sector could increase by an additional 30 percent by 2050.

In a recent study published on Nature Climate Change, scientists pointed out that “the intensification of agriculture (the Green Revolution, in which much greater crop yield per unit area was achieved by hybridization, irrigation and fertilization) during the past five decades is a driver of changes in the seasonal characteristics of the global carbon cycle”.

As shown in the graph below, livestock-related emissions from enteric fermentation and manure contributed nearly two-thirds of the total GHG agricultural emissions produced in the last years, with synthetic fertilizers and rice cultivation being the other major sources.

According to another report by FAO (“Tackling climate change through livestock”, accessible here in pdf), the livestock sector is estimated to emit 7.1 billion tonnes CO2-eq per year, with beef and cattle milk production accounting for the majority of the sector’s emissions (41 and 19 percent respectively).

Emission intensities (i.e. emissions per unit of product) are highest for beef (almost 300 kg CO2-eq per kilogram of protein produced), followed by meat and milk from small ruminants (165 and 112kg CO2-eq.kg respectively). Cow milk, chicken products and pork have lover global average emission intensities (below 100 CO2-eq/kg). However, emission intensity widely varies at sub-global level due to the different practices and inputs to production used around the world. According to FAO, the livestock sector plays an important role in climate change and has a high potential for emission reduction.

Together with increasing conversion of land to agricultural activities and the use of fertilizers, increasing energy use from fossil fuels is one of the main drivers that boosted agricultural emissions in the last decades. FAO estimated that in 2010 emissions from energy uses in food production sectors (including emissions from fossil fuel energy needed i.e. to power machinery, irrigation pumps and fishing vessels) amounted to 785 million tonnes CO2e.

FAO latest data show that in the past two decades around 40 percent of GHG agricultural outputs (including emissions from energy use) are based in Asia. The Americas has the second highest GHG emissions (close to 25 percent), followed by Africa, Europe and Oceania.

According to FAO, since 1990 the top ten emitters are: China, India, US, Brazil, Australia, Russia, Indonesia, Argentina, Pakistan and Sudan.

The need for climate-smart agriculture and food production systems becomes even more compelling when considering the shocking level of waste within the global food system. According to the first FAO study to focus on the environmental impacts of food wastage, released in 2013 (accessible here in pdf), each year food that is produced and gone to waste amounts to 1.3 billion tonnes.

Food wastage’s carbon footprint is estimated at 3.3 billion tonnes of CO2 equivalent released into the atmosphere per year, to which must be added significant amounts of agricultural areas (1.4 billion hectares, globally) and water (250km3) used annually to produce food that is lost or wasted.

How to meet global food needs (with global population projected to reach 9 billion in 2050) without overexploiting soil and water, and with lower emissions contributing to climate change (whose impacts in turn affect water and food security) is the greatest farming challenge of of today’s and tomorrow’s world. More