Going to work these days is always a bit of a thrill for me–often more than I care for. It means crossing a 15,000 foot (4,570 m) pass over the Bolivian Andes and snaking down a muddy one lane road carved into the face of immense cliffs. The Most Dangerous Road in the World was the title of an old National Geographic article… 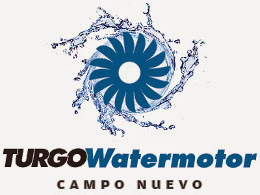 But on this side, it's just the opposite. Uncounted streams and waterfalls abound, some falling hundreds of feet directly onto the roadway! About 80 people die yearly on this short section of road, since it is very narrow and slippery. Vehicles that slip off the road can simply disappear into dense vegetation a thousand feet (300 m) below. It's incredible to think that this is the only road into a tropical part of Bolivia that's the size of Texas.

It's a relief to arrive in the lovely 5,500 foot (1676 m) high town of Coroico, near our demo site. Green hillsides are covered with coffee, citrus, and bananas. This also happens to be the home of Bolivia's traditional coca leaf production, so the area is much affected by the U.S. “War on Drugs.”

Our family-sized appropriate technology organization, Campo Nuevo, was started to better the lives of Bolivia's rural poor. We teach them how to use their local natural resources for energy. We show them how easy it is to employ the abundant small local sources of water power to improve their lives. This can help make it possible for them to remain on their land and in their own communities. 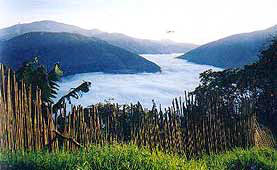 We are working with Aymara speaking native Americans, one of the largest and most intact indigenous cultures in the Western Hemisphere. Notable for having withstood the Incan conquest, and later the Spaniards, the Aymaras are now succumbing to the pressures of modern global economics. Like rural people all over the “third world,” they are being forced to relocate simply to survive. They usually migrate to a desolate l3,000 foot (3,960 m) suburb of La Paz, in order to compete for unskilled, low paying, and often temporary jobs.

Although they may not realize it, what visitors to our demonstration site see is not actually new. It's actually a revival of the now nearly forgotten traditional use of water power. For thousands of years before the invention of centrally-generated electricity, water power was employed to directly run machines, something it does very well.

What is new is the development of a modern low-cost turbine specifically for this purpose-a “motor” driven by water power. We call it the “Watermotor.” It can provide the energy to drive a variety of machines, replacing the mid-sized electric motors upon which nearly all modern production depends.

Lester Pelton, who invented the pelton wheel, produced a variety of these water powered motors and they were in use before l900. They were used to power individual machines – he even used one to run a sewing machine! The direct drive hydro units were replaced by electric motors after the popularization of centrally produced electricity.

Few people realize how closely rural poverty is related to the lack of machines necessary for local production and services. In the third world, the power grid is usually confined to cities and large towns. Rural people still use muscle power as everyone did in the past, and they do without electric lights. The need to generate cash to buy anything they don't produce themselves causes a focus on cash crops. This further reduces their self-sufficiency, encouraging a downward spiral towards dependency on a system that cannot be depended upon!

Demo SiteAt our new Campo Nuevo demonstration site, we are featuring practical machines, directly powered by water. There are woodworking tools, air compressors, grain mills and an auto alternator to charge batteries and provide lighting. This is switched on when mechanical power is not being used, run by the same belt drive that powers the tools.

The main attraction at our site is our Campo Nuevo Watermotor driving a multipurpose woodworking unit. The machine is suitable for producing doors, window frames and furniture-necessities usually purchased from the city. It processes locally produced lumber instead of wood carried up from the Amazon forest.

The Watermotor at our demonstration site is provided with power from a water source located 60 feet (18.3 m) above the machine by 160 feet (50m.) of lightweight 4″ plastic pipe.

At the heart of our Watermotor turbine is a Swedish designed 4 jet Turgo wheel and a patented Turgo control system which provides the same instant on/off power control as an electric motor.

Unlike an electric motor, the Watermotor costs nothing to operate and can't be “burned out” from hard use.

Not much of this area is served by roads or the power grid. The U.S. owned (and U.S. priced) power generating system has little incentive to provide long distance lines to a widely scattered and typically impoverished rural population. Water power is the sole available practical source of energy to run machines. There is not a good wind resource in the mountain valleys and PV is just not economical, compared to the abundant water power here.

There are major obstacles to the introduction of unfamiliar technology to an indigenous population that has traditionally used no machines of any kind. These people have little money to invest in anything that does not promise a practical return. In addition to this, the Aymaras are unlikely to be reached by advertising in the newspapers from La Paz. This is why we felt that a local demonstration site was necessary.

Other problems are encountered when machines, however useful, need to be “professionally” installed, maintained or repaired. Such services are frequently unreliable, hard to come by in rural areas, and expensive when available.

In designing the Watermotor system, we have tried to overcome these obstacles as much as possible. It is designed to be user-installed, maintained, and repaired because of the difficulties in finding competent, honest and reliable technical services in rural areas of Bolivia. Because the Watermotor is locally produced from common materials, most parts can be easily replaced.

The efficiency of direct drive water power is a big advantage. A surprisingly small amount of water falling a short distance can produce the 0.5 to 5 h.p. of mechanical power required by most common machines. This means that many potential water power sites are available, and a minimum of civil engineering is required.

Of course the power output of the Watermotor depends on the fall and the amount of water that one uses to run it. Here are some examples of other possible installations and the energy output that they would produce:

The Watermotor itself is very simple to operate, and maintain. It functions efficiently in a variety of water power situations. By merely experimenting with easily changed water jets of different sizes, it is possible to vary maximum power output. This also allows the turbine to maintain efficient output over seasonal water flow variations. A single control handle diverts water away from the Turgo wheel, instantly cutting power.

The Watermotor can be used to drive most stationary machines normally driven by an externally-mounted electric motor or small gasoline engine in the 0.5 to 4 horsepower range.

Machines being driven by the Watermotor can be mounted directly on the turbine housing or beside the turbine. The tools are connected to the Watermotor by a standard belt, which limits the distance between the two parts of the system.

How does the Watermotor stack up against the competition? I asked a couple of renewable energy experts to give me the rough cost of a wind or photovoltaic system capable of producing 2 1/2 hp of mechanical energy 24 hours a day, including installation in rural Bolivia and technical expertise for maintenance and repair.

Richard Perez of Home Power said, “Well, the photovoltaic panels alone will cost about US$35,000. And the requirement for 24 hour power at that level means a very large battery bank which will bring the system cost up to around US$70,000. And we still need to add small stuff like racks, inverter, and controls. Overall, I'd say about US$80,000. It really points out how cheap hydro is.

Mick Sagrillo, North American wind power guru, said, “My guess, using off the shelf equipment, would be that you'd need a Bergey Excel. While it's larger than what's needed, it's cheaper than putting up several smaller turbines. Cost for genny and controls is about US$19,000, less tower, wiring, batteries, and balance of systems components. Total system cost would be roughly US$35,000. The one message I always deliver at my wind power workshops is that if anyone has a good hydro site, they're in the wrong workshop. While wind is cheaper than PV, it's no comparison for a hydro site with a 100 percent capacity factor.”

Now, this is not a scientific comparison, and these are admittedly rough figures. But the Watermotor can do this-produce 2 1/2 hp continuous-with a system cost of less than US$2,000. It's user installable and maintainable (two lube points), and easily repairable. It has only one moving part and is immune to damage from hard use. Consider also the sources of PV and wind equipment (all imported) and the possibility of damage from misuse or poor maintenance.

Watermotor type designs were abandoned about l00 years ago in the developed world in favor of electric motors. To the best of my knowledge, there are no machines equivalent to the Watermotor being produced today. Generally, very few products, no matter how useful, are produced with the aim of promoting self-sufficiency among the rural poor.

The best advertisement for our water driven machines is for them to be seen hard at work by the many people passing the demo site daily. Woodworking and grain milling machines in particular have a substantial per-hour cash value. Because the Watermotor is immune to damage from hard use, it is suitable to rent or lease. At current rates, the entire cost of a Watermotor installation should be recovered in only a few months.

We expect visitors to our demonstration site to have their own ideas about how they can use the Watermotor. The success of this site will provide us with knowledge and incentive to build similar sites in other parts of Bolivia.

While Bolivia is especially rich in water power resources, many other parts of the world have similar conditions, and similar needs. We would like to see this clean, self-renewing, and easy to use natural resource made available to all.