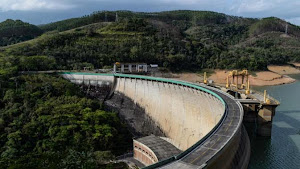 Water levels are also dwindling at three other plants that serve a region home to 16 million people, but an ONS spokesman denied there was any immediate threat to energy supplies.

“The hydroelectric plant was switched off Wednesday as there was no longer enough water to keep its turbines turning,” the spokesman said of the shutdown at the largest of the four sites.

The plants receive their water from the Paraiba do Sul river, which flows through the states of Sao Paulo and Minas Gerais, as well as Rio.

Last month, the states' governors agreed to begin work on improving the infrastructure of the sites as the drought shows little sign of abating.