Crimes against humanity in Gaza: is it really a 'buffer zone' – or a bigger plan 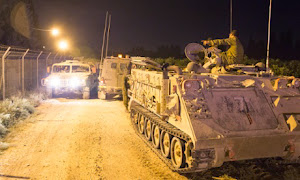 Late last week, the White House decried Israel’s attack on a UN school in Gaza as “totally unacceptable” and “totally indefensible”, then proceeded to approve $225m in funding for its Iron Dome. On Monday, the US state department went further, calling the airstrikes upon a UN school “disgraceful” – and yet America provides Israel with more than $3.1bn every year, restocking the ability of the Israel Defense Force (IDF) to hit more schools, and to wage total war against an imprisoned people, because of their nationality.

American taxpayers should not be paying for this. And the western world should stop rejecting serious inquiries about Israel’s moral inconsistencies, or allow it to benefit from cognitive dissonance and information overload amid the current crisis in Gaza.

There is a land grab going on. The Israeli prime minister, Binjamin Netanyahu, has shrunk Gaza’s habitable land mass by 44%, with an edict establishing a 3km (1.8-mile) buffer zone, a “no-go” zone for Palestinians – and that’s quite significant, because a good part of Gaza is only 3 to 4 miles wide. Over 250,000 Palestinians within this zone must leave their homes, or be bombed. As their territorial space collapses, 1.8m Gazans now living in 147 square miles will be compressed into 82 square miles.

Gaza’s entire social and physical infrastructure of housing, hospitals, places of worship, more than 130 of its schools, plus markets, water systems, sewer systems and roads are being destroyed. Under constant attack, without access to water, sanitary facilities, food and medical care, Gazans face an IDF-scripted apocalypse.

With Gaza’s land mass shrinking due to Israeli military action, it’s about time someone asked: What is the end game? Three weeks ago, Moshe Feiglin, deputy speaker of the Knesset, called for Gaza to “become part of sovereign Israel and will be populated by Jews. This will also serve to ease the housing crisis in Israel.”

Israel has a housing crisis? After the “no-go” buffer zone is evacuated, there will be 21,951 Palestinians per square mile in Gaza, while Israel’s population density stands at 964 persons per square mile.

Deputy Speaker Feiglin wants the Palestinians in Gaza to lose all of their land. One must not assume that Mr Feiglin or his Likud faction speak for the main government actors like Prime Minister Netanyahu. After all, Knesset politics are complex and divergent. But since Gaza has just lost control of that 44% of its land, it may also be time to ask: does the establishment of that 3km zone represent the unfolding of a larger plan? Is that the end game?

At the very point where an aroused public becomes aghast at the slaughter of Gazans, the western world becomes inured to the violence, hypnotized by the media’s cadence of body counts. The intolerable becomes normalized, and later ignored as old news. Which would seem a perfect time to leave in place the 3km zone – for security purposes, of course – and then advance the proposal that Palestinians crammed into the remaining 56% of Gaza simply … leave.

I assume the IDF acts with deliberation, under orders from the Netanyahu government. And I think the extraordinary and illegal forced relocation of over 250,000 Palestinians from 44% of Gazan land is a crime against humanity under the guise of establishing a “buffer zone” for security purposes.

Yes, Hamas’s attacks on Israel are illegal and should be condemned, and those who ordered the attacks should be held accountable under law. All policies and practices which refuse to recognize Israel’s right to exist should be condemned. Israel has a right to exist. But Israel’s right to exist is impaired when Israel decides Palestinians have no right to exist on their own land. It’s time for us to stop paying for Israel’s dubious, destructive self-righteousness. And it’s time for the solipsism syndrome afflicting Israel’s leaders to get a day of discussion in the International Criminal Court concerning their attacks on Gaza – and especially their new 3km “buffer zone”. More