As UN negotiators meet in Lima to work out a plan for dealing with rising temperatures, Matt McGrath visited a community paying a high price for water supplies threatened by climate change and increasing demand. Is Peru’s experience a sign of things to come? 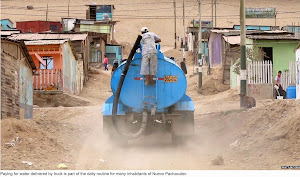 Snarling and screeching, the bouncing water truck speeds backwards down the steep hill, in a cloud of coarse dust.

It halts with a judder and a wild eyed, sweaty man jumps from the cab, grabs a large plastic pipe on the back and starts to fill a series of plastic containers on the ground, with little care.

Dressed in bright pink, a woman looks on nonchalantly.

The man runs up to her and holds out his hand. She drops some coins and away he goes, jumping onto the running board of his vehicle, already snorting its way to the next stop.

This is daily routine for tens of thousands of people who live in this sprawling hillside settlement that looks down on the Pacific Ocean, less than an hour north of Lima, Peru.

Water in Nuevo Pachacutec is not just the vital substance for life, it is a measure of social status and progress.

People first came to these hazy hills in the 1980s, in response to politicians who promised them land in return for votes.

When they first arrived the women said their feet would just sink in the sand. That’s all that was here.

The politicians allowed them to take the ground – but most of the 160,000 people here do not have legal title. They are “possessors of the land” but not the owners.

And land is too grand a word. This is really a desert. After Cairo, Lima is said to be the world’s second biggest city built in one. Rainfall here amounts to just 50mm of water per year.

A river runs through it

A few kilometres south of Nuevo Pachacutec, a miserable, dirty stream meanders under a motorway.

Bags of rubbish sit alongside the ubiquitous tractor tyres.

This is the Chillon river, the sole water source for around two million people in northern Lima.

The waters of the Chillon are fed by glaciers in the Andes. And this is a source of concern.

“We are worried here in Peru because climate change is already having a huge impact on our access to water,” says Armando Mendoza a research officer with Oxfam in the country.

“In the last 40 years, the glacial coverage has retreated by 40% more or less, because of the increase in global warming.

“The predictions are that in the future access to water will become even more difficult and the ones who are most vulnerable to this are the poor.”

These longer term water issues with glaciers are not the immediate priority in Nuevo Pachacutec.

As well as the speeding tuktuks, the sandy roads are festooned with signs for car washes, even private schools.

Despite the fact that 80% of the homes are made of wood, incomes and aspirations are rising here.

Access to water is critical in this development, as it is in developing nations all over the world.

With funding from the German government, a green group called Alternativa has helped build networks of white water tanks, connected by underground tubes that bring water directly to the houses.

They have also installed 900 outside water points in this sprawling settlement.

Their efforts to date have brought the vital liquid to 9,000 households.

In this community, water is more than just a key ingredient for life, it is a reflection of harsh social divisions.

Despite the fact that 80% of the homes are made of wood, incomes and aspirations are rising here.

Access to water is critical in this development, as it is in developing nations all over the world.

With funding from the German government, a green group called Alternativa has helped build networks of white water tanks, connected by underground tubes that bring water directly to the houses.

They have also installed 900 outside water points in this sprawling settlement.

Their efforts to date have brought the vital liquid to 9,000 households.

In this community, water is more than just a key ingredient for life, it is a reflection of harsh social divisions.

Radios and children play loudly on the street where Daniza Cruz Navarro lives.

The homes on this stretch are known as the “casas azules” – the blue houses.

Outside many sit blue plastic barrels, some with lids, some without, that hold the water residents get from the trucks that constantly career about the local roads.

Dogs lap from the open containers. Mosquitoes lay their eggs in the water.

“You can see the effects of the way the water is being stored in the kids’ health,” says Daniza.

“They often get sick, there is often misuse and mismanagement of the water here.”

She has moved on from the blue barrel and is now the owner of a more effective and efficient water tank that she has bought through the efforts of Alternativa.

However, as she still gets water directly from the delivery trucks, she has to pay significantly more than her neighbours.

Those who are connected to the main water grid pay just 6-12 Soles per month.

These are big sums of money and the differences can be a source of friction between neighbours.

Despite these problems, those who work with the people in Nuevo Pachacutec say progress is being made. It’s really a story of local self-empowerment.

“Even if they are not perfect, they have bettered considerably,” says engineer Osvaldo Caceres who works with Alternativa.

“This infrastructure is managed by them, for them. The local population know what they want, but they know and understand they have to participate to get it.

“When we first got here it was all desert – there were no roads, it was pure sand,” says Ycella Bonilla a resident of Nuevo Pachacutec.

Ycella calls it her “unit of dignity”.

Despite this advance, Ycella and her family are still paying heavily for water. She has a hose and a key that allows her family to plug into a water point. For this she pays 80 Nuevo Soles a month (£18; $27) a month.

Despite the gripes over cost, Ycella recognises that water is the bedrock of development for the community.

“We have roads, we have schools, we have a lot of the basic necessities now, including water.”

The struggle for development and the need to have resources like water to empower that development is not just on the minds of those in Nuevo Pachacutec.

An hour down the road in Lima itself, UN climate negotiators are struggling with that same dilemma. How to balance the burgeoning needs of a growing population, with the need to limit those same enriching activities because they threaten the future of the planet.

Osvaldo Caceres says that as in solving the water stresses of Nuevo Pachacutec, the climate battle can be won, by everyone playing their part now. It’s no use passing the buck down the generations.

“Every actor in this chain must take responsibility for what they have to do,” he says.

“The governments, the authorities, and obviously the people, they all need to act.” “There is no other way.” More