“If we save Tuvalu, we save the world” – UN Climate Convention, Peru 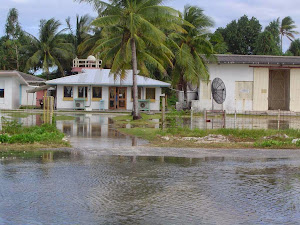 9 December 2014, Lima, Peru – The Prime Minister of Tuvalu paid homage to ancestors buried in Peru at the UN Climate Convention today. Taking the floor at the High Level Segment of the 20th Conference of the Parties, he began his statement acknowledging the interesting and tragic historical connection with Peru.

During the 1860's slave traders known as blackbirders took approximately 400 people from Tuvalu to work in Peru. None of them ever returned.

“There are Tuvaluans buried here on this land and we pay our respects to our ancestors who were brought here against their will,” stated Hon. Enele Sosene Sopoaga, Prime Minister of Tuvalu – remembering the history of Tuvalu before looking to the future.

“I am here at this important meeting as the highest representative of the people of Tuvalu. I carry a huge burden and responsibility. I carry their hopes that there will be a future for Tuvalu. This is an enormous burden to carry. It keeps me awake at night. No national leader in the history of humanity has ever faced this question. Will we survive or will we disappear under the sea? I ask you all to think what it is like to be in my shoes.”

On the frontlines of climate change, the greatest single threat to the island atoll, Tuvalu is heartened by the progress leading to a new climate change protocol made at the UN Climate Convention in Peru yet also very clear that they will not support a new protocol without a substantive programme on loss and damage. The new agreement must be agreed upon by the end of December, 2015 in Paris, the host of the next Conference of the Parties.

“Tuvalu, and I suspect most of the world, believes that reaching a comprehensive new protocol in Paris is absolutely essential. We cannot repeat Copenhagen. We cannot suffer the frustration and humiliation of being asked to accept a half-hearted response to a critical global crisis.”

The coral atoll nation of Tuvalu consists of nine inhabited islands with the highest point above sea level being four meters. Now experiencing climate change impacts through saltwater intrusion into agricultural areas, lack of potable water and coastal erosion – the fate of Tuvalu is in the hands of the international community.

To access the full statement presented by Hon. Enele Sosene Sopoaga, Prime Minister of Tuvalu at the High Level Segment of the 20th Conference of the Parties to the United Nations Framework Convention on Climate Change please visit: http://unfccc.int/files/meetings/lima_dec_2014/statements/application/pdf/cop20_hls_tuvalu.pdf