HASKELL COUNTY, Kan. — Forty-nine years ago, Ashley Yost’s grandfather sank a well deep into a half-mile square of rich Kansas farmland. He struck an artery of water so prodigious that he could pump 1,600 gallons to the surface every minute. 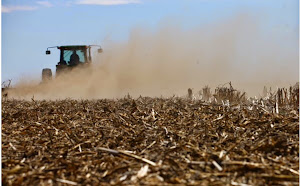 Last year, Mr. Yost was coaxing just 300 gallons from the earth, and pumping up sand in order to do it. By harvest time, the grit had robbed him of $20,000 worth of pumps and any hope of returning to the bumper harvests of years past.

“That’s prime land,” he said not long ago, gesturing from his pickup at the stubby remains of last year’s crop. “I’ve raised 294 bushels of corn an acre there before, with water and the Lord’s help.” Now, he said, “it’s over.”

The land, known as Section 35, sits atop the High Plains Aquifer, a waterlogged jumble of sand, clay and gravel that begins beneath Wyoming and South Dakota and stretches clear to the Texas Panhandle. The aquifer’s northern reaches still hold enough water in many places to last hundreds of years. But as one heads south, it is increasingly tapped out, drained by ever more intensive farming and, lately, by drought.

Vast stretches of Texas farmland lying over the aquifer no longer support irrigation. In west-central Kansas, up to a fifth of the irrigated farmland along a 100-mile swath of the aquifer has already gone dry. In many other places, there no longer is enough water to supply farmers’ peak needs during Kansas’ scorching summers.

And when the groundwater runs out, it is gone for good. Refilling the aquifer would require hundreds, if not thousands, of years of rains.

This is in many ways a slow-motion crisis — decades in the making, imminent for some, years or decades away for others, hitting one farm but leaving an adjacent one untouched. But across the rolling plains and tarmac-flat farmland near the Kansas-Colorado border, the effects of depletion are evident everywhere. Highway bridges span arid stream beds. Most of the creeks and rivers that once veined the land have dried up as 60 years of pumping have pulled groundwater levels down by scores and even hundreds of feet.

On some farms, big center-pivot irrigators — the spindly rigs that create the emerald circles of cropland familiar to anyone flying over the region — now are watering only a half-circle. On others, they sit idle altogether.

Two years of extreme drought, during which farmers relied almost completely on groundwater, have brought the seriousness of the problem home. In 2011 and 2012, the Kansas Geological Survey reports, the average water level in the state’s portion of the aquifer dropped 4.25 feet — nearly a third of the total decline since 1996.

And that is merely the average. “I know my staff went out and re-measured a couple of wells because they couldn’t believe it,” said Lane Letourneau, a manager at the State Agriculture Department’s water resources division. “There was a 30-foot decline.”

Kansas agriculture will survive the slow draining of the aquifer — even now, less than a fifth of the state’s farmland is irrigated in any given year — but the economic impact nevertheless will be outsized. In the last federal agriculture census of Kansas, in 2007, an average acre of irrigated land produced nearly twice as many bushels of corn, two-thirds more soybeans and three-fifths more wheat than did dry land.

Farmers will take a hit as well. Raising crops without irrigation is far cheaper, but yields are far lower. Drought is a constant threat: the last two dry-land harvests were all but wiped out by poor rains.

In the end, most farmers will adapt to farming without water, said Bill Golden, an agriculture economist at Kansas State University. “The revenue losses are there,” he said. “But they’re not as tremendously significant as one might think.”

Some already are. A few miles west of Mr. Yost’s farm, Nathan Kells cut back on irrigation when his wells began faltering in the last decade, and shifted his focus to raising dairy heifers — 9,000 on that farm, and thousands more elsewhere. At about 12 gallons a day for a single cow, Mr. Kells can sustain his herd with less water than it takes to grow a single circle of corn.

“The water’s going to flow to where it’s most valuable, whether it be industry or cities or feed yards,” he said. “We said, ‘What’s the higher use of the water?’ and decided that it was the heifer operation.”

The problem, others say, is that when irrigation ends, so do the jobs and added income that sustain rural communities.

“Looking at areas of Texas where the groundwater has really dropped, those towns are just a shell of what they once were,” said Jim Butler, a hydrogeologist and senior scientist at the Kansas Geological Survey.

The villain in this story is in fact the farmers’ savior: the center-pivot irrigator, a quarter- or half-mile of pipe that traces a watery circle around a point in the middle of a field. The center pivots helped start a revolution that raised farming from hardscrabble work to a profitable business.

Since the pivots’ debut some six decades ago, the amount of irrigated cropland in Kansas has grown to nearly three million acres, from a mere 250,000 in 1950. But the pivot irrigators’ thirst for water — hundreds and sometimes thousands of gallons a minute — has sent much of the aquifer on a relentless decline. And while the big pivots have become much more efficient, a University of California study earlier this year concluded that Kansas farmers were using some of their water savings to expand irrigation or grow thirstier crops, not to reduce consumption.

A shift to growing corn, a much thirstier crop than most, has only worsened matters. Driven by demand, speculation and a government mandate to produce biofuels, the price of corn has tripled since 2002, and Kansas farmers have responded by increasing the acreage of irrigated cornfields by nearly a fifth.

At an average 14 inches per acre in a growing season, a corn crop soaks up groundwater like a sponge — in 2010, the State Agriculture Department said, enough to fill a space a mile square and nearly 2,100 feet high.

Sorghum, or milo, gets by on a third less water, Kansas State University researchers say — and it, too, is in demand by biofuel makers. As Kansas’ wells peter out, more farmers are switching to growing milo on dry land or with a comparative sprinkle of irrigation water.

But as long as there is enough water, most farmers will favor corn. “The issue that often drives this is economics,” said David W. Hyndman, who heads Michigan State University’s geological sciences department. “And as long as you’ve got corn that’s $7, then a lot of choices get made on that.”

Of the 800 acres that Ashley Yost farmed last year in Haskell County, about 70 percent was planted in corn, including roughly 125 acres in Section 35. Haskell County’s feedlots — the county is home to 415,000 head of cattle — and ethanol plants in nearby Liberal and Garden City have driven up the price of corn handsomely, he said.

But this year he will grow milo in that section, and hope that by ratcheting down the speed of his pump, he will draw less sand, even if that means less water, too. The economics of irrigation, he said, almost dictate it.

“If you can pump 150 gallons, that’s 150 gallons Mother Nature is not giving us. And if you can keep a milo crop alive, you’re going to do it.”

Mr. Yost’s neighbors have met the prospect of dwindling water in starkly different ways. A brother is farming on pivot half-circles. A brother-in-law moved most of his operations to Iowa. Another farmer is suing his neighbors, accusing them of poaching water from his slice of the aquifer.

A fourth grows corn with an underground irrigation system that does not match the yields of water-wasting center-pivot rigs, but is far thriftier in terms of water use and operating costs.

For his part, Mr. Yost continues to pump. But he also allowed that the day may come when sustaining what is left of the aquifer is preferable to pumping as much as possible.

This year, Mr. Yost spent more than $15,000 to drill four test wells in Section 35. The best of them produced 195 gallons a minute — a warning, he said, that looking further for an isolated pocket of water would be costly and probably futile.