Force-feeding a competent person is not the practice of medicine; it is aggravated assault.' 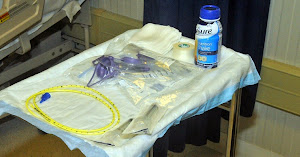 Leading medical groups are speaking out in support of a U.S. Navy nurse who refused on ethical grounds to force-feed hunger strikers held captive at Guantanamo Bay.

The American Nurses Association announced Wednesday that they have penned letters to U.S. government and military officials strongly urging against any punishment or retaliation for the act of refusal, which occurred in July. The military is planning to try the unidentified nurse, who is an officer, before a Board of Inquiry, which could result in a dishonorable discharge that strips him of his veterans benefits.

“The ANA Code of Ethics for Nurses clearly supports the ethical right of a professional nurse to make an independent judgment about whether he or she should participate in this or any other such activity,” reads an October 17 letter (pdf) to Secretary of Defense Chuck Hagel from Pamela Cipriano, ANA president. “The military setting does not change the nurse’s ethical commitments or standards.”

Doctor Vincent Iacopino, senior medical adviser for Physicians for Human Rights, told Common Dreams that his organization strongly supports the nurse's refusal to take part in the force-feeding of competent adults, which is banned by the World Medical Association and the American Medical Association and has been condemned by the office of the United Nations high commissioner for human rights as torture and a violation of international law.

“Force feedings are being done without informed consent, against people's wishes,” said Iacopino. “We have codes of conduct that prohibit us from conducting therapeutic interventions or diagnostic procedures that people do not consent to.”

“The government is claiming it is doing this to save people's lives,” Iacopino continued. “The reality is that people are on hunger strike, protesting something: indefinite detention, often without charges. Any health professional under those circumstances has a duty to refuse. This is ill treatment with no respect for autonomy.”

This is not the first time medical professionals have called for non-participation in the Guantanamo Bay force-feedings.

In op-ed published in the New England Journal of Medicine in July, a time of doctors writes, “Force-feeding a competent person is not the practice of medicine; it is aggravated assault. Using a physician to assault prisoners no more changes the nature of the act than using physicians to 'monitor' torture makes torture a medical procedure. Military physicians are no more entitled to betray medical ethics than military lawyers are to betray the Constitution or military chaplains are to betray their religion.”

Furthermore, the American Medical Association also penned a letter to Hagel in April declaring, “Every competent patient has the right to refuse medical intervention, including life-sustaining interventions.”

The nurse's act of refusal was originally revealed by Abu Wa'el Dhiab, a Syrian man and father of four who currently held in Guantanamo Bay despite being cleared for release since 2009. Dhiab told his lawyers at Reprieve that he heard the nurse, described as an approximately 40 year-old Latino man, state, “I have come to the decision that I refuse to participate in this criminal act.”

“Before we came here, we were told a different story,” the nurse reportedly added. “The story we were told was completely the opposite of what I saw.”

The U.S. military has been broadly criticized for its treatment of hunger strikers. In response, the U.S. has imposed secrecy on its procedures and practices, including a media blackout on the number of people participating in the protest.

If this brave and honourable nurse is going to be tried, then so should President Obama and the Joint Chief of Staff. Editor