Mary Madden feels paranoid. Last fall Madden noticed something suspicious. The water filling the tanks outside her veterinary clinic in Los Gatos, Calif., was disappearing at an alarming rate. Madden checked for leaks but found none. Then she realized: Someone was stealing her water. 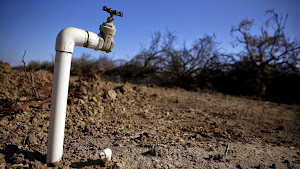 “I just couldn’t believe it,” she said. “You never imagine anyone would do something like that but there it was, vanishing right before our eyes.”

Madden decided to act. She installed security cameras. Then she put locks on the tanks. She even strung a chain across her driveway to keep out unwanted visitors. The theft stopped after the locks went on. But Madden never caught the thief, and she can’t stop thinking about who did it.

“This is a really small community, so you sit here and start going through everyone you know and wondering if it was them,” she said.

Madden is not alone. Water theft has become increasingly common in California as the state suffers through its worst drought on record. There’s no reliable tracking of just how much water has gone missing. But reports of theft rose dramatically in the past year. Officials say a black market set up to peddle water is thriving as wells run dry. And law enforcement is scrambling to respond.

Mendocino County has made catching water thieves a top priority. The sheriff’s office set up a water-theft hotline and investigates every tip. It also puts out patrols to sniff out suspicious activity.

In August, a sheriff’s deputy there followed a trail of water droplets up a dirt road where he discovered a truck outfitted with a water tank. A confession came quickly. The driver had siphoned water from a nearby canal and planned to sell it to the highest bidder.

The Public Works Department in Lemoore, in Kings County, hired someone to scan city streets for thieves after officials found evidence that someone has been stealing water from fire hydrants.

For now, a statewide effort to curb water theft has yet to materialize. So cities and counties have been left to devise their own methods of retribution.

Officials complain that the penalty for getting caught may not be sufficiently strict: Mendocino County counts water theft as a misdemeanor. County Supervisor Carre Brown considers that a slap on the wrist. “To me this is like looting during a disaster. It should be a felony,” Brown said.

Contra Costa County fines anyone caught stealing water $25. Amid worsening theft, the county may soon increase the penalty to $250 and up the amount to $500 for repeat offenders.

But even with all the attention from law enforcement, officials say that much of the theft has gone unpunished.

“This is something that’s very hard to pin down. If you don’t catch someone in the act, how do you prove they did it?” Mendocino County Sheriff Tom Allman said.

As a result, some California residents have taken matters into their own hands. Online forums and community message boards serve as informal channels where people can post a warning. Word-of-mouth has also proven effective at spreading information.

After Madden told people what had happened, neighbors started to keep an eye on her property. “People will tell me if they see a truck lingering nearby when I’m not there,” she said. “We all look out for each other.”

Rural communities where residents rely on well water and areas of the state that play host to agricultural operations and illegal marijuana cultivation have been particularly hard hit.

Thousands of gallons of water were stolen from a fire station in North San Juan, a town nestled in the foothills of the Sierra Nevada Mountains, at the height of wildfire season this summer. The theft was discovered after an engineer hit the station’s water tank and heard a hollow ringing sound rather than the usual thud.

“We were just absolutely stunned,” said Boyd Johnson, a battalion chief with the North San Juan fire department. “Fires are on everyone’s mind during the summer so to see this happen, I think it really scared people.”

Residents of North San Juan depend on wells for water. The area is also known for growing marijuana and located just a few hours north of California’s Central Valley, an area of the state where farmers rely on massive amounts of water to ensure the success of their crops.

This past summer thieves also made off with water from an elementary school and a public health clinic on the San Juan Ridge.

James Berardi, the principal of the school that was hit, says security cameras have been installed in an effort to catch thieves. The fire department is also taking precautions. After the theft, lockboxes with a combination padlock were put on each of the station’s water tanks.

“It slows us down a bit getting to the water, but at least we know it’s safe,” Johnson said.

A growing number of wells have run dry on the ridge as the drought drags on. And that, according to Caleb Dardick, a resident of nearby Nevada City, means the theft is unlikely to end anytime soon.

All this has made water a chief concern for residents of the state who say they never used to give water a second thought.

“I think about water constantly, obsessively,” Madden said. “I wake up every day dreading what might happen if we run out.” More