The Caribbean’s response to Climate Change is grounded in a firm regional commitment, policy and strategy. Our three foundation documents – The Liliendaal Declaration (July 2009), The Regional Framework for Achieving Development Resilient to Climate Change (July 2009) and its Implementation Plan (March 2012) – are the basis for climate action in the region.

The Fifth Assessment Report (AR5) of the United Nations Intergovernmental Panel on Climate Change (IPCC) underscores the importance, scientific rigour and utility of these landmark documents. The IPCC’s latest assessment confirms the Caribbean Community’s longstanding call to limit global temperature rise to 1.5 degrees celsius as outlined in the Liliendaal Declaration. At the Nations Nation Framework Convention on Climate Change (UNFCCC) Conference of the Parties (COP) Meeting in 2009, which took place in Copenhagen, Denmark, the Caribbean Community indicated to the world community that a global temperature rise above 1.50C would seriously affect the survival of the community.

In 2010 at the UNFCCC COP Meeting in Cancun, governments agreed that emissions ought to be kept at a level that would ensure global temperature increases would be limited to below 20C. At that time, the Alliance of Small Island States (AOSIS), which includes the Caribbean, re-iterated that any rise in temperature above 1.50C would seriously affect their survival and compromise their development agenda. The United Nations Human Development Report (2008) and the State of the World Report (2009) of The Worldwatch Institute supports this position and have identified 20C as the threshold above which irreversible and dangerous Climate Change will become unavoidable.

Accordingly, the Caribbean welcomes the IPCC’s Fifth Assessment Report prepared by over 2000 eminent scientists. It verifies observations in the Caribbean that temperatures are rising, extreme weather events are occurring more frequently, sea levels are rising, and there are more incidences of coral bleaching. These climatic changes will further exacerbate the limited availability of fresh water, agricultural productivity, result in more erosion and inundation, and increase the migration of fish from the Caribbean to cooler waters and more hospitable habitats. The cumulative effect is reduced food security, malnutrition, and productivity, thus increasing the challenges to achieving poverty reduction and socio-economic development.

The report notes that greenhouse gases emissions, the cause of Climate Change, continues to rise at an ever increasing rate. Unless this trend is arrested and rectified by 2050, global temperatures could rise by at least 4°C by 2100. This would be catastrophic for the Caribbean. However, the report is not all gloom and doom. More than half of the new energy plants for electricity are from renewable resources, a trend that must accelerate substantially if the goal of limiting global warming to below 2°C by 2100 is to remain feasible.

The IPCC AR5 Report should therefore serve as a further wake up call to our region that we cannot continue on a business as usual trajectory. It is an imperative that Climate Change be integrated in every aspect of the region’s development agenda, as well as its short, medium and long-term planning. The region must also continue to aggressively engage its partners at the bilateral and multilateral levels to reduce their emissions. The best form of adaptation is reduction in emissions level. 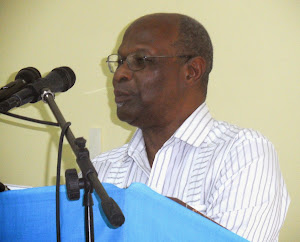 See the highlights of the Caribbean Launch of the UN IPCC AR5 Report in this video:

Learn more about the implications of the IPCC AR5 Report via http://www.caribbeanclimate.bz and @CaribbeanClimate.