(NaturalNews) Water wells in central California have begun to run dry, reports the LA Times. (1) “Extreme drought conditions have become so harsh for the Central Valley community of East Porterville [that] many of its residents dependent on their own wells have run out of water.” 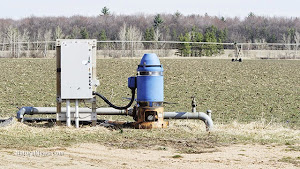 Tulare County has confirmed their wells have run out of water, and so far hundreds of homes have no running water.

According to the LA Times, rumors are also spreading that Child Protective Services officials will begin taking children away from families who have no running water, although the county claims the rumor is false.

It begins: the collapse of California's water aquifers

With this news, it is now official that the collapse of California's water aquifers has begun. With each passing month and year, more and more wells will run dry across the state as California plummets into the desert conditions from which it once sprang.

Extreme drought now covers 82% of California, according to the National Drought Mitigation Center. (2) Fifty-eight percent of the state is in “exceptional drought.”

During the unfolding of this drought, California farmers and cities have siphoned unprecedented volumes of water out of the state's underground aquifers. This is called “fossil water” and it can take centuries to regenerate. Once this fossil water is used up, it's gone.

35-year “megadrought” may be on the way

“The southwestern United States has fifty percent change of suffering a 'megadrought' that lasts 35 years,” reports the Daily Mail. (3)

“They say global warming has meant the chance of a decade long drought is at least 50 percent, and the chances of a 'megadrought' – one that lasts up to 35 years – ranges from 20 to 50 percent over the next century.”

One scientist is quoted in the story as saying, “This will be worse than anything seen during the last 2,000 years and would pose unprecedented challenges to water resources in the region.”

Unless politicians become magical wizards and figure out a way to create water out of nothing, what all this really means is that cities of the American southwest will not be able to support present-day populations. A mass migration (evacuation) out of the cities will be necessary sooner or later.

California's water deficit will lead to ecological and economic collapse

In an almost perfect reflection of California's state budget deficits, the state is also running an unsustainable water deficit. It is a mathematical certainty that when you remove far more water from the aquifers than is being replenished, the amount of water remaining in those aquifers will eventually reach zero.

This “zero day” water reality is still psychologically denied by most Californians. If the reality of this situation were widely recognized, California would be experiencing a glut of real estate inventory as millions of homeowners tried to sell their properties and evacuate the state. The fact that the real estate market has not yet collapsed in California tells us that Californians are still living in a state of denial about the future of their water supply.

Even as California's water supply collapses by the day, local farmers and towns have few options other than drilling for more water. “Drill! Drill! Drill!” is the mantra of the day, creating an 18-month backlog for well drilling companies. Each new well that's drilled must seek to go deeper than the previous wells which are running dry. It's a literal race to the bottom which can only end in catastrophe.

Then again, a willful acceleration toward catastrophe is merely a sign of the times when it comes to human civilization. There is almost no area in which humans have ever achieved balance: not in fossil fuels, metals mining, fossil water exploitation, debt creation, industrial chemical contamination, ecological exploitation or even global population. It's almost as if the human race is determined to destroy itself while racing to see who can achieve self destruction first. More