The horror we saw in Ferguson may be just the start. Here’s some other police gear our military is working on. 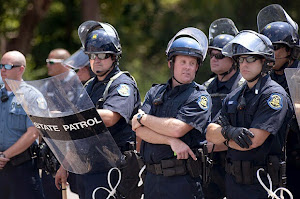 Now that the sight of American police decked out as if they are replaying the events of Blackhawk Down has alerted the American public to the militarization of our police agencies, perhaps they will finally be receptive to the warnings that some of us have been making for years about the next generation of weapons that are being developed for “crowd control.” As we’ve seen over the past few days, regardless of whether it’s created for military purposes, this gear tends to eventually end up on the streets of the United States.

In Ferguson this week the police used one of these new weapons, the LRAD, also known as a sound cannon. These were developed fairly recently as an interdiction device to repel pirates or terrorists in the aftermath of the attack on the USS Cole. But their use as a weapon to disperse crowds quickly became obvious. In Ferguson it seems to have served mostly as a warning device, but it can cause substantial pain and hearing damage if it’s deployed with the intent to send crowds running in the opposite direction. It’s been used liberally by police departments for the past few years, even at such benign public gatherings as a sand castle competition in San Diego, California. The police chief (as it happens, the former FBI agent in charge at the Ruby Ridge standoff) explained that it was there in case they needed it. Evidently, San Diego takes its sand castle competitions very seriously.

But the LRAD is a toy compared to some of the other weapons the military industrial complex has been developing to deal with “crowd control.” Take Shockwave, the new electric shock weapon developed by Taser International, a sort of taser machine gun:

The cartridges are tethered by 25-foot wires, which can be fired from a distance of up to 100 meters in a 20-degree arc. The “probes” on the end of the cartridges can pierce through clothing and skin, emitting 50,000 volts of electricity in the process.

“Multiple Shockwave units can be stacked together (like building blocks) either horizontally or vertically in order to extend area coverage or vertically to allow for multiple salvo engagements.” The product description states.

The weapons can also be vehicle mounted or “daisy chained” according to Taser. Clearly it is anticipated that these things will be used on sizable crowds, meaning an increased likelihood of indiscriminate targeting.

The Department of Defense touts the use of these weapons as battlefield devices, but considering the huge market for military gear among police forces, it’s fairly obvious that they have been developed for domestic use as well. You can watch a demonstration of the device here. You’ll note the demo opens with the question: “What if you could drop everyone in a given area to the ground with the push of a button?” (They leave out the part where they are all screaming and writhing in terrible pain …)

And then there’s Taser’s new shotgun style taser called the XREP (for Extended Range External Projectile).It has the advantage of being able to be shot from a real gun and it delivers 20 long excruciating seconds of unbearable pain as opposed to the wimpy 5 seconds of the regular taser — which kills people with regularity. (You can see a demonstration of that one here.) The Taser drone is still in development but it’s sure to be a very welcome addition to the electroshock weapon arsenal.

If we believe, as Joe Scarborough does, that citizens are required to instantly comply with police regardless of the situation, these devices are perfect enforcement tools. On the other hand, if you believe that citizens have a right to peacefully protest and that police are not automatically entitled to deference in all circumstances, then you might want to think twice about the use of these weapons. They are only barely better than allowing police to shoot into crowds with bullets. Tasers can kill people and cause them to badly injure themselves and they are far too easy for police to use indiscriminately since the public has been brainwashed into believing they are harmless.

But there’s more. The military has been developing something called the Active Denial System, also known as the Pentagon’s Ray Gun. “60 Minutes” did a laudatory story on it a few years back in which it showed the training exercises the Army was using to test the weapon for potential use in Iraq. The funny thing was that the exercises featured soldiers dressed as protesters carrying signs that said “world peace,” “love for all,” which the “60 Minutes” correspondent characterized as something soldiers might confront in Iraq. (Who knew there was a large contingent of American-style hippies in Iraq staging antiwar protests?) The weapon itself is something out of science fiction: It’s a beam of electromagnetic radiation that heats the skin to a painful 130 degrees allegedly without inflicting permanent damage. They claim there have been almost no side effects or injuries. It just creates terrible pain and panics the peaceniks into dispersing on command. What could be better than that? Imagine how great it would be if any time a crowd gathers and the government wants to shut it down, they can just zap it with heat and send everyone screaming in agony and running in the opposite direction.

In his thorough Harper’s investigation on this subject, reporter Ando Arike explained the purpose behind all these new technologies:

[We have] an international arms-development effort involving an astonishing range of technologies: electrical weapons that shock and stun; laser weapons that cause dizziness or temporary blindness; acoustic weapons that deafen and nauseate; chemical weapons that irritate, incapacitate, or sedate; projectile weapons that knock down, bruise, and disable; and an assortment of nets, foams, and sprays that obstruct or immobilize. “Non-lethal” is the Pentagon’s approved term for these weapons, but their manufacturers also use the terms “soft kill,” “less-lethal,” “limited effects,” “low collateral damage,” and “compliance.” The weapons are intended primarily for use against unarmed or primitively armed civilians; they are designed to control crowds, clear buildings and streets, subdue and restrain individuals, and secure borders. The result is what appears to be the first arms race in which the opponent is the general population.

As I wrote earlier, in a couple of weeks the Soft-kill Convention, also known as Urban Shield, will be holding its annual trade show in Oakland, California. Police agencies from all over the world will attend to try out the various types of modern weapons that will be on display there. The super high-tech weapons described above are probably some years away from the commercial market. But it’s highly likely they will make their way to the police eventually through one of the many ways the weapons manufacturers manage to put this equipment in the hands of civilian authorities — if the federal government continues to make money available for that purpose.

Hopefully, Ferguson has alerted the public to the danger to our civil rights and liberties brought by the federal government arming police forces to the teeth with military gear. But it’s going to take vigilance to ensure that the next time we see civil unrest and peaceful protests on the streets of America, the authorities won’t be responding with electroshock or laser weapons or electromagnetic radiation devices designed purely for the purpose of gaining instant compliance from people in a crowd. If Americans foolishly accept these weapons as an improvement on the harsher methods we might see today there is a grave danger that we will be giving authorities much more power to quell dissent. In a free society it shouldn’t be easy to quell dissent. If it is, that society won’t be free for very long. More