JULY 30, 2014 Water scarcity may be the most underrated resource issue the world is facing today. 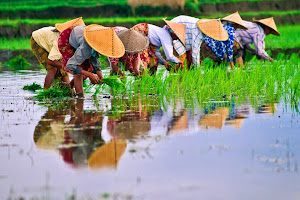 Seventy percent of world fresh water use is for irrigation.

Between 1950 and 2000, the world’s irrigated area tripled to roughly 700 million acres. After several decades of rapid increase, however, the growth has slowed dramatically, expanding only 9 percent from 2000 to 2009. Given that governments are much more likely to report increases than decreases, the recent net growth may be even smaller.

The dramatic loss of momentum in irrigation expansion coupled with the depletion of underground water resources suggests that peak water may now be on our doorstep.

Today some 18 countries, containing half the world’s people, are overpumping their aquifers. Among these are the big three grain producers—China, India, and the United States.

Saudi Arabia is the first country to publicly predict how aquifer depletion will reduce its grain harvest. It will soon be totally dependent on imports from the world market or overseas farming projects for its grain.

While falling water tables are largely hidden, rivers that run dry or are reduced to a trickle before reaching the sea are highly visible. Among this group that has limited outflow during at least part of the year are the Colorado, the major river in the southwestern United States; the Yellow, the largest river in northern China; the Nile, the lifeline of Egypt; the Indus, which supplies most of Pakistan’s irrigation water; and the Ganges in India’s densely populated Gangetic basin.

Many smaller rivers and lakes have disappeared entirely as water demands have increased.

Overseas “land grabs” for farming are also water grabs. Among the prime targets for overseas land acquisitions are Ethiopia and the Sudans, which together occupy three-fourths of the Nile River Basin, adding to the competition with Egypt for the river’s water.

It is often said that future wars will more likely be fought over water than oil, but in reality the competition for water is taking place in world grain markets. The countries that are financially the strongest, not necessarily those that are militarily the strongest, will fare best in this competition.