Green Aruba is an annual conference born in 2010 with the specific aim to place dedicated emphasis on Aruba's energy transition to 100% fuel independence.

Besides showcasing Aruba's progress and challenges to the accelerated penetration of renewables in the total energy mix, Green Aruba also exhibits the experiences and knowledge of other institutions and island nations in this field. Over the past six years, Green Aruba has evolved into a practical and valuable well-known platform within the region for the exchange of information and applied knowledge on sustainable and best practices for the shift to cleaner, more environmentally friendly energy sources and resources.

At this year's Green Aruba conference to be held October 27th and 28th, the main theme will focus on sharing sustainability by together confronting the common barriers we face, identifying the solutions moving forward and creating the essential roadmaps to achieve our desired growth paths of the sustainability journey for our island nations.

Aruba has made remarkable progress over the years in the penetration level of renewables and/or efficiency at production level, with in 2015 reaching close to the 20% mark. With the ongoing and upcoming planned projects operational by the end of 2017, the 40% barrier will be surpassed by 2018!

With our goal to reach 100% fuel free energy production by 2020, and in order to surpass the 40% level, it is fundamental to embark on a “deep dive” into our existing energy mix. Aruba is examining cutting-edge technologies and new business models for our utility companies, all in conjunction with our RAS framework, to create a balance between Reliable and Sustainable investments. This balancing act will only be achievable if energy production costs remain Affordable for the customer base.

Local utility stakeholders together with foreign renowned institutions are preparing for this dive known as the Aruba Renewable Integration Study (ARIS), and will present their approach and concept at the upcoming conference. The ARIS will provide models that map out the road forward towards Aruba's aspiring renewable energy goals, while maintaining grid reliability and minimizing overall system costs, and can serve as a prototype or starting point for fellow island nations. More 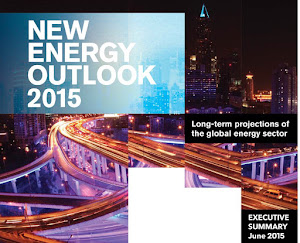 By 2040, the world's power-generating capacity mix will have transformed: from today's system composed of two-thirds fossil fuels to one with 56% from zero-emission energy sources. Renewables will command just under 60% of the 9,786GW of new generating capacity installed over the next 25 years, and two-thirds of the $12.2 trillion of investment. • Economics – rather than policy – will increasingly drive the uptake of renewable technologies. All-in project costs for wind will come down by an average of 32% and solar 48% by 2040 due to steep experience curves and improved financing. Wind is already the cheapest form of new power generation capacity in Europe, Australia and Brazil and by 2026 it will be the least-cost option almost universally, with utility-scale PV likely to take that mantle by 2030.

• Over 54% of power capacity in OECD countries will be renewable energy capacity in 2040 – from a third in 2014. Developed countries are rapidly shifting from traditional centralised systems to more flexible and decentralised ones that are significantly less carbon-intensive. With about 882GW added over the next 25 years, small-scale PV will dominate both additions and installed capacity in the OECD, shifting the focus of the value chain to consumers and offering new opportunities for market share.

• In contrast, developing non-OECD countries will build 287GW a year to satisfy demand spurred by economic growth and rising electrification. This will require around $370bn of investment a year, or 80% of investment in power capacity worldwide. In total, developing countries will build nearly three times as much new capacity as developed nations, at 7,460GW – of which around half will be renewables. Coal and utility-scale PV will be neck and neck for additions as power-hungry countries use their low-cost domestic fossil-fuel reserves in the absence of strict pollution regulations.

• Solar will boom worldwide, accounting for 35% (3,429GW) of capacity additions and nearly a third ($3.7 trillion) of global investment, split evenly between small- and utility-scale installations: large-scale plants will increasingly out-compete wind, gas and coal in sunny locations, with a sustained boom post 2020 in developing countries, making it the number one sector in terms of capacity additions over the next 25 years.

• The real solar revolution will be on rooftops, driven by high residential and commercial power prices, and the availability of residential storage in some countries. Small-scale rooftop installations will reach socket parity in all major economies and provide a cheap substitute for diesel generation for those living outside the existing grid network in developing countries. By 2040, just under 13% of global generating capacity will be small-scale PV, though in some countries this share will be significantly higher.

• In industrialised economies, the link between economic growth and electricity consumption appears to be weakening. Power use fell with the financial crisis but has not bounced back strongly in the OECD as a whole, even as economic growth returned. This trend reflects an ongoing shift to services, consumers responding to high energy prices and improvements in energy efficiency. In OECD countries, power demand will be lower in 2040 than in 2014.

• The penetration of renewables will double to 46% of world electricity output by 2040 with variable renewable technologies such as wind and solar accounting for 30% of generation – up from 5% in 2014. As this penetration rises, countries will need to add flexible capacity that can help meet peak demand, as well as ramp up when solar comes off-line in the evening. More

5 February 2015: The Caribbean Centre for Renewable Energy and Energy Efficiency (CCREEE) and the Caribbean region's sustainable energy strategies were at the center stage at two Special Meetings of the Council for Trade and Economic Development (COTED) of the Caribbean Community (CARICOM).

The ministerial meetings on energy and the environment focused on the establishment of the CCREEE, regional energy coordination and sustainable energy strategies, and the post-2015 development agenda, among other themes.

The establishment of the CCREEE, which was endorsed by COTED in November 2014, was on the agenda of the Special Meetings on Energy, and Energy and the Environment, held in Georgetown, Guyana, from 4-5 February. The meetings, among other things, explored “the full ramifications and optimum exploitations of CCREEE.” CCREEE is currently in the process of being established with the assistance of the UN Industrial Development Organisation (UNIDO), Austrian Government and SIDS DOCK initiative of the Alliance of Small Island States (AOSIS). The Centre's mandate will be technical, namely to support and coordinate the execution of CARICOM's sub-regional and regional renewable energy and energy efficiency programmes, projects and activities.

Calling for a “cohesive regional effort” to achieve sustainable energy security, Chair of the Special Meeting on Energy, and Minister of Science, Technology, Energy and Mining of Jamaica Phillip Paulwell said that “although sustainable energy solutions have made great strides” in the CARICOM region, significant gaps and barriers remained in the areas of renewable energy access, energy efficiency and reliable grid development and deployment.

CARICOM Deputy Secretary-General Manorma Soeknandan similarly noted that, despite progress made, “significant additional changes” would need to be made to meet the demands for reliable, secure, efficient and cost-effective energy services, suggesting that “energy is about sustainable livelihoods and job creation alike.”

17 November 2014: The World Resources Institute (WRI) has launched a factsheet that enables better cost comparisons of electricity from renewables and fossil fuels by identifying key factors to consider, namely: type of user; supply options; and factors that impact additional costs and benefits, such as environmental risks or financial incentives.

The publication, titled ‘Understanding Renewable Energy Cost Parity,’ seeks to provide a simple, “go-to” resource for information on appropriate comparisons of renewable and “traditional” electricity supply options. The factsheet constitutes the first in a series of three publications that aim to support clarity and precision in cost analyses of renewable energy options made by decision makers in companies, residences, governments and advocacy organizations. In particular, the guide is intended for electricity buyers looking for financial savings, and electricity system planners, regulators and policy makers seeking economic and social benefits for end-users.

The publication argues that, in order for decision makers to know where and when renewable energy is the cheapest solution, they should establish: “with what should a renewable energy option be compared”; and “which factors need to be considered in determining cost parity.”