Nearly 30 percent of the world's cotton supply comes from India and Pakistan, much of that from the Indus River Valley. On average, about 737 billion gallons are withdrawn from the Indus River annually to grow cotton—enough to provide Delhi residents with household water for more than two years. (See a map of the region.) 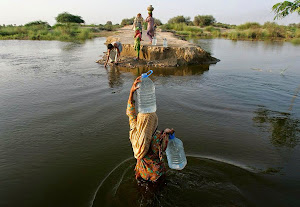 “Pakistan's entire economy is driven by the textile industry,” said Michael Kugelman, a South Asia expert at the Woodrow Wilson International Center for Scholars. “The problem with Pakistan's economy is that most of the major industries use a ton of water—textiles, sugar, wheat—and there's a tremendous amount of water that's not only used, but wasted,” he added.

The same is true for India.

That impact is an important part of a complex water equation in countries already under strain from booming populations. More people means more demand for water to irrigate crops, cool machinery, and power cities. The Indus River, which begins in Indian-controlled Kashmir and flows through Pakistan on its way to the sea, is Pakistan's primary freshwater source—on which 90 percent of its agriculture depends—and a critical outlet of hydropower generation for both countries.

Downstream provinces are already feeling the strain, with some dried-out areas being abandoned by fishermen and farmers forced to move to cities. That increases competition between urban and rural communities for water. “In areas where you used to have raging rivers, you have, essentially, streams or even puddles and not much else,” said Kugelman.

In years past, the coastal districts that lost their shares of the Indus' flows have become “economically orphaned,” the poorest districts in the country, according to Pakistani water activist Mustafa Talpur. Because Pakistani civil society is weak, he says, corruption and deteriorating water distribution tend to go hand in hand.

In the port city of Karachi, which depends for its water on the Indus, water theft—in which public water is stolen from the pipes and sold from tankers in slums and around the city—may be a $500-million annual industry.

In the balance is the fate not only of people, but important aquatic species like the Indus River dolphin, which is now threatened to extinction by agricultural pollution and dams, among other pressures. Scientists estimate that fewer than 100 individuals remain.

One of the potentially catastrophic consequences of the region's fragile water balance is the effect on political tensions.

In India, competition for water has a history of provoking conflict between communities. In Pakistan, water shortages have triggered food and energy crises that ignited riots and protests in some cities. Most troubling, Islamabad's diversions of water to upstream communities with ties to the government are inflaming sectarian loyalties and stoking unrest in the lower downstream region of Sindh.

But the issue also threatens the fragile peace that holds between the nations of India and Pakistan, two nuclear-armed rivals. Water has long been seen as a core strategic interest in the dispute over the Kashmir region, home to the Indus' headwaters. Since 1960, a delicate political accord called the Indus Waters Treaty has governed the sharing of the river's resources. But dwindling river flows will be harder to share as the populations in both countries grow and the per-capita water supply plummets.

Some growth models predict that by 2025, India's population will grow to triple what it was—and Pakistan's population to six times what it was—when the Indus treaty was signed. Lurking in the background are fears that climate change is speeding up the melting of the glaciers that feed the river.

Mountain glaciers in Kashmir play a central role in regulating the river's flows, acting as a natural water storage tank that freezes precipitation in winter and releases it as meltwater in the summer. The Indus is dependent on glacial melting for as much as half of its flow. So its fate is uniquely tied to the health of the Himalayas. In the short term, higher glacial melt is expected to bring more intense flooding, like last year's devastating deluge.

Both countries are also racing to complete large hydroelectric dams along their respective stretches of the Kashmir river system, elevating tensions. India's projects are of a size and scope that many Pakistanis fear could be used to disrupt their hydropower efforts, as well as the timing of the flows on which Pakistani crops rely.

“Many in Pakistan are worried that, being in control of upstream waters, India can easily run Pakistan dry either by diverting the flow of water by building storage dams or using up all the water through hydroelectric power schemes,” said Pakistani security analyst Rifaat Hussain.

Hope for the Future

In the past few months, however, the situation has improved, according to Kugelman. “We've been hearing nearly unprecedented statements from very high-level Pakistani officials who have essentially acknowledged that India is not stealing Pakistan's water, and that Pakistan's water problems are essentially a function of internal mismanagement issues,” he said. Militants are still griping, he said, “but not as shrilly.”

This may be because the two countries are cooperating on water and other issues better than before, and because militants are now focusing less on their archenemy in India and more on coalition forces in Afghanistan.

“But I imagine this is momentary,” said Kugelman. “The facts on the ground—the water constraints in both India and Pakistan—have not abated. They're both still very serious and getting worse.”

This Article is part the National Geographic Society’s freshwater initiative and is a multiyear global effort to inspire and empower individuals and communities to conserve freshwater and preserve the extraordinary diversity of life that rivers, lakes, and wetlands sustain.

The scramble for control of natural resources to support economic and population growth, combined with the uncertain effects of climate change on the Tibetan Plateau, is raising tensions in Asia over Himalayan water resources.

Ten of the region’s largest and longest rivers (the Amu Darya, Brahmaputra, Ganges, Indus, Irrawaddy, Mekong, Salween, Tarim, Yangtze, and Yellow) originate in the Himalayas. These rivers help provide water, food, and energy for nearly 4 billion people in China and across South and Southeast Asia—nearly half of the world’s population. However, depletion and diversion of these transborder resources to meet growing industrial, agricultural, and urban demands have the potential to trigger far-reaching economic, social, and environmental challenges.

The lack of comprehensive and effective regional frameworks for cooperation hinders sustainable management of these waterways. China, which controls the headwaters of these rivers, has an enormous need for Himalayan water to satisfy economic and energy demands but has little incentive to participate in formal water-sharing and water-management agreements with its neighbors. China’s dam-building and water-diversion projects are a source of major concern to the countries downstream, which often complain about Beijing’s lack of transparency and reluctance to share information. Although managing water-sharing relations with China might be the most prominent challenge, cooperation is not much easier at the middle and lower reaches of the rivers. Collaboration in South and Southeast Asia is frequently frustrated by competing national interests, economic priorities, political disputes, and weak regional organizations. In addition to the environmental impacts of man-made diversion projects and unsustainable freshwater usage, there is also inadequate cooperation on scientific research to understand and prepare for the effects of climate change on the region’s water supplies. 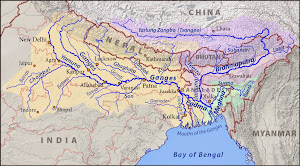 This Asia Policy roundtable contains seven essays that discuss the challenges and implications of water security in Asia and recommend steps that both upstream and downstream countries could take to better manage the region’s shared water resources.

Securing the Himalayas as the Water Tower of Asia: An Environmental Perspective
Jayanta Bandyopadhyay 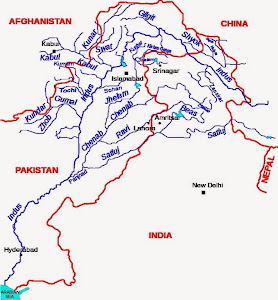 As I have been arguing for a number of years South Asia needs to re-negotiate the Indus Water Treaty to encompass Afghainstan, Bangladesh, Bhutan, China, India, Nepal and Pakistan before the region starts to suffer from water insecurity and the effects of climate change. Editor