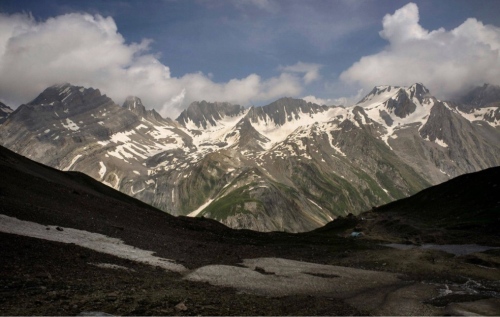 The peaks and valleys of the Hindu Kush Himalaya mountain ranges are some of the most inaccessible, remote regions in the world today—but even the most isolated valleys have been touched by climate change, say the authors of a comprehensive new report about the vast region. The changes have already complicated life for the 240 million people who live amongst its crags and peaks, the authors say, and the effects are likely to snowball in the future.

Across the high mountain region, which stretches from Afghanistan in the west to Myanmar in the east, air temperatures have risen by nearly two degrees Fahrenheit since the start of the 20th century—and the cold temperatures have warmed up faster than in the rest of the world. In response, glaciers are retreating; permafrost is melting; and weather patterns are becoming more erratic, disrupting previously reliable water sources for millions and instigating more natural disasters.
“Mountains matter, and it’s time we start paying attention to them,” says Phillipus Wester, chief scientist at the International Centre for Integrated Mountain Development, in Kathmandu and one of the lead authors of the report, which pulled together over 200 scientists and analysts.
Without immediate, global attention to curb future warming and effort from the countries within the mountain range to adapt, future climate change may tip the region into difficulties from which it will be challenging, if not impossible, to recover, the study warns. Read More