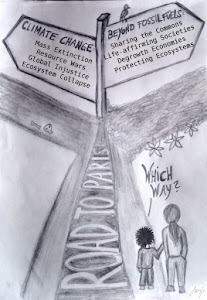 The Path From Paris

He writes that: “A maximum of 1.5C, now an aspirational and unlikely target, was eminently achievable when the first UN climate change conference took place in Berlin in 1995. Two decades of procrastination, caused by lobbying – overt, covert and often downright sinister – by the fossil fuel lobby, coupled with the reluctance of governments to explain to their electorates that short-term thinking has long-term costs, ensure that the window of opportunity is now three-quarters shut. The talks in Paris are the best there have ever been. And that is a terrible indictment.””

Here is 350’s Bill McKibben, following up on the Avaaz positive clarion call to arms with a powerful article in today’s Guardian titled ‘Climate deal: the pistol has fired, so why aren’t we running?’

“With the climate talks in Paris now over, the world has set itself a serious goal: limit temperature rise to 1.5C. Or failing that, 2C. Hitting those targets is absolutely necessary: even the one-degree rise that we’ve already seen is wreaking havoc on everything from ice caps to ocean chemistry. But meeting it won’t be easy, given that we’re currently on track for between 4C and 5C. Our only hope is to decisively pick up the pace . . . the only important question, is: how fast . . .

“You’ve got to stop fracking right away (in fact, that may be the greatest imperative of all, since methane gas does its climate damage so fast). You have to start installing solar panels and windmills at a breakneck pace – and all over the world. The huge subsidies doled out to fossil fuel have to end yesterday, and the huge subsidies to renewable energy had better begin tomorrow. You have to raise the price of carbon steeply and quickly, so everyone gets a clear signal to get off of it . . .

“The world’s fossil fuel companies still have five times the carbon we can burn and have any hope of meeting even the 2C target – and they’re still determined to burn it. The Koch Brothers will spend $900m on this year’s American elections. As we know from the ongoing Exxon scandal, there’s every reason to think that this industry will lie at every turn in an effort to hold on to their power –

What this boils down to is not an issue of National Security, but of Global Security, of Planetary Security. The huge subsidies doled out to fossil fuel companies must be clawed back and put towards the Clean Energy Agenda. This is particularly an issue given what we know from the ongoing Exxon scandal, there’s every reason to think that this industry will lie at every turn unless made to pay for their endangerment of humanity.

We have to raise the price of carbon steeply and quickly and use this income to mitigate and sequester carbon in the atmosphere.

Kevin Anderson concludes that we have to make: “Fundamental changes to the political and economic framing of contemporary society. This is a mitigation challenge far beyond anything discussed in Paris – yet without it our well-intended aspirations will all too soon wither and die on the vine. We owe our children, our planet and ourselves more than that. So let Paris be the catalyst for a new paradigm – one in which we deliver a sustainable, equitable and prosperous future for all.”

We must remember that the Montreal Treaty did work. Kofi Annan, Former Secretary General of the United Nations stated “Perhaps the single most successful international agreement to date has been the Montreal Protocol” Remember; “It always seems impossible until it's done” Nelson Mandela. More