Virtually every time the U.S. fires a missile from a drone and ends the lives of Muslims, American media outlets dutifully trumpet in headlines that the dead were “militants” — even though those media outlets literally do not have the slightest idea of who was actually killed. 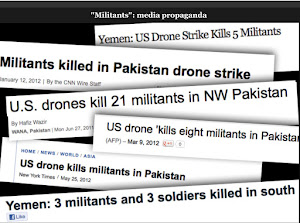 They simply cite always-unnamed “officials” claiming that the dead were “militants.” It’s the most obvious and inexcusable form of rank propaganda: media outlets continuously propagating a vital claim without having the slightest idea if it’s true.

This practice continues even though key Obama officials have been caught lying, a term used advisedly, about how many civilians they’re killing. I’ve written and said many times before that in American media discourse, the definition of “militant” is any human being whose life is extinguished when an American missile or bomb detonates (that term was even used when Anwar Awlaki’s 16-year-old American son, Abdulrahman, was killed by a U.S. drone in Yemen two weeks after a drone killed his father, even though nobody claims the teenager was anything but completely innocent: “Another U.S. Drone Strike Kills Militants in Yemen”).

This morning, the New York Times has a very lengthy and detailed article about President Obama’s counter-Terrorism policies based on interviews with “three dozen of his current and former advisers.” I’m writing separately about the numerous revelations contained in that article, but want specifically to highlight this one vital passage about how the Obama administration determines who is a “militant.” The article explains that Obama’s rhetorical emphasis on avoiding civilian deaths “did not significantly change” the drone program, because Obama himself simply expanded the definition of a “militant” to ensure that it includes virtually everyone killed by his drone strikes. Just read this remarkable passage;

Mr. Obama embraced a disputed method for counting civilian casualties that did little to box him in. It in effect counts all military-age males in a strike zone as combatants, according to several administration officials, unless there is explicit intelligence posthumously proving them innocent.

Counterterrorism officials insist this approach is one of simple logic: people in an area of known terrorist activity, or found with a top Qaeda operative, are probably up to no good. “Al Qaeda is an insular, paranoid organization — innocent neighbors don’t hitchhike rides in the back of trucks headed for the border with guns and bombs,” said one official, who requested anonymity to speak about what is still a classified program.

This counting method may partly explain the official claims of extraordinarily low collateral deaths. In a speech last year Mr. Brennan, Mr. Obama’s trusted adviser, said that not a single noncombatant had been killed in a year of strikes. And in a recent interview, a senior administration official said that the number of civilians killed in drone strikes in Pakistan under Mr. Obama was in the “single digits” — and that independent counts of scores or hundreds of civilian deaths unwittingly draw on false propaganda claims by militants.

But in interviews, three former senior intelligence officials expressed disbelief that the number could be so low. The C.I.A. accounting has so troubled some administration officials outside the agency that they have brought their concerns to the White House. One called it “guilt by association” that has led to “deceptive” estimates of civilian casualties.

“It bothers me when they say there were seven guys, so they must all be militants,” the official said. “They count the corpses and they’re not really sure who they are.”

For the moment, leave the ethical issues to the side that arise from viewing “all military-age males in a strike zone as combatants”; that’s nothing less than sociopathic, a term I use advisedly, but I discuss that in the separate, longer piece I’ve written. For now, consider what this means for American media outlets. Any of them which use the term “militants” to describe those killed by U.S. strikes are knowingly disseminating a false and misleading term of propaganda. By “militant,” the Obama administration literally means nothing more than: any military-age male whom we kill, even when we know nothing else about them. They have no idea whether the person killed is really a militant: if they’re male and of a certain age they just call them one in order to whitewash their behavior and propagandize the citizenry (unless conclusive evidence somehow later emerges proving their innocence).

What kind of self-respecting media outlet would be party to this practice? Here’s the New York Times documenting that this is what the term “militant” means when used by government officials. Any media outlet that continues using it while knowing this is explicitly choosing to be an instrument for state propaganda — not that that’s anything new, but this makes this clearer than it’s ever been. More