Already, American corporations are poised to rush into a country only 90 miles from Florida’s shores.In March, a delegation from the U.S. Agriculture Coalition for Cuba, an agribusiness group that includes Cargill, the National Grain and Feed Association, the National Chicken Council and other companies and organizations, flew to Havana to meet with Cuban officials. 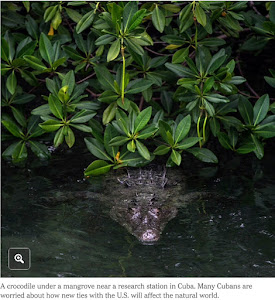 And cruise ship companies and hotel chains like Marriott and Hilton have indicated their enthusiasm. “I can’t stop thinking about it,” Frank Del Rio, chief executive officer of Norwegian Cruise Line Holdings, said in an interview. “Cuba and the cruise industry are just a match made in heaven, waiting to happen. More

The question for the Cayman Islands, who is considering constructing a new cruise ship dock, is how will the opening of Cuba affect cruise traffic to George Town?

I argue that an Economic Study is needed, in addition to the Environmental Impact Assesment (EIA), to analyse the economics of the cruise business to the Cayman Islands as a whole. This study should compare the financial benefits of stay-over tourism, with the extension of Owen Roberts International Airport (ORIA) to 10.000' feet allowing the handling of long-haul direct flights from Europe, East Asia (China, Japan, South Korea) and the Persian Gulf. It may be possible to turn ORIA into the air-hub of the Western Caribbean with Cayman Airways actually turning a profit as a regional carrier. Editor