At the launch of A New Climate for Peace, a new report on climate-fragility risks produced for the G7 by a consortium of international partners including the Wilson Center, USAID Deputy Assistant Administrator Christian Holmes called water a common denominator for climate risk. 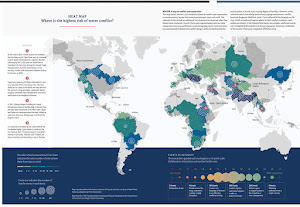 “How you manage your water programs…has a huge amount to do with how you mitigate the prospect for increased fragility,” he said. “Sometimes it’s the obvious that’s so easy to miss, and I think that the obvious on water as it relates to economic development is, essentially, the question of sustainable water supply.”

One of the most striking infographics from A New Climate for Peace touches on that question of supply. Using data from Oregon State University’s Transboundary Freshwater Dispute Database and adapted from a graphic that originally appeared in Popular Sciencelast year, the map shows the world’s most active – and tension-filled – international water basins.

Water is a common denominator for climate risk

The Transboundary Freshwater Dispute Database measures not only the frequency of hostile events in a basin, but cooperative ones as well, each on a sliding scale. Hostile events range from declarations of war (zero recorded from 1990 to 2008, the period of time encompassed by the graphic) to leaders using “language of discord.” Cooperative events range from “mild verbal support” to “voluntary unification into a single country.”

The total number of events is indicated by shades of blue – the darker the blue, the more transboundary events, both positive and negative. This is essentially the “hot list” of international water basins – which regions have the most official and unofficial chatter over water.

Circles superimposed on the basins represent the total number of hostile events. As the description text points out, however, “circle size does not automatically translate into conflict danger.” In some places, transboundary institutions and diplomatic frameworks allow different actors to work through their differences. Cooperative hostility, if you will. In the Danube River Basin, for example, the high number of “hostile” events is mitigated by strong cooperative incentives associated with European integration. Likewise in North America, where Canada, the United States, and Mexico share several basins with a high number of hostile events, there is little chance of violent conflict.

Water basins in South Asia, the Middle East, and East Africa are major hotspots with a high number of hostile events and weaker institutional frameworks to mitigate them. The Indus, Ganges-Brahmaputra-Meghna, Salween, Tigris-Euphrates, and Jordan basins witness a very high number of interactions, suggesting at least that continued dialogue could be a way forward to mitigate the risk of violent conflict or fragility. The Nile Basin has less activity reflecting the stalled negotiations between the basin’s 10 member states to replace colonial-era water agreements. The Mekong Basin, where the largest member, China, does not participate as a full member of the Mekong River Commission, shows less activity as well.

The map does a great job illustrating why it can be difficult to answer the question, where is the highest risk of water-related violence? Tensions between states and other freshwater basin actors isn’t necessarily a sign of impending violence if there’s a framework to resolve them. Likewise, lack of communication over a major natural resource can be a bad sign for cooperation when the resource in question is the Nile. More

More infographics from ‘A New Climate for Peace: Taking Action on Climate and Fragility Risks’ are available on NewClimateforPeace.org.