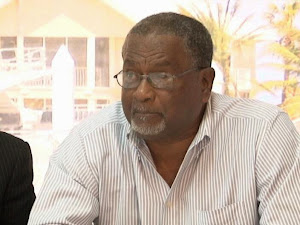 Pakistan, for example, is unlikely to be able to end poverty by 2030 if accelerating climate change brings worse weather disasters, water scarcity and other problems, a new report from the UK-based Climate and Development Knowledge Network said.

But if global warming is held to 2 degrees Celsius – the aim of negotiations toward a new U.N. climate deal at the end of the year in Paris – Pakistan would have only a “low” risk of failing to eradicate poverty, the report said.

Planned new sustainable development goals (SDGs) aimed at ending poverty, improving gender equality, and giving access to water and clean power have a much higher chance of being achieved if action to limit climate change is ambitious, the report's authors said.

But if weaker efforts on climate change put the world on track for a 3 to 5 degree Celsius temperature rise, Asia and sub-Saharan Africa could see poverty rates 80 percent to 140 percent higher, the report found.

If the new sustainable development goals, expected to be agreed in New York in September, have strong targets, they could lift ambition in the year-end climate deal, the report said.

The report, by a team of economic policy and development experts, is one of the first attempts to put rough numbers on how the two new global deals due this year on climate change and sustainable development might interact.

States are negotiating over a proposal for 17 new sustainable development goals, backed by 169 targets, focused on everything from reducing inequality, hunger and climate change to managing forests and oceans better and promoting sustainable economic growth.

At the climate negotiations in December, leaders will aim to put in place an agreement, which would take effect in 2020, to curb carbon emissions and help poorer countries adapt to climate change and adopt a cleaner development path.

There are huge areas of overlap, experts say, not least because climate change impacts – such as water insecurity and more weather-related disasters – can cut harvests and incomes, and lead to children leaving school, as well as forcing governments to divert development funds to disaster relief.

Investing in cleaner, cheaper energy could not only cut climate risks but also improve health and provide the power needed to spur economic growth, the researchers said.

They are also extremely vulnerable to climate-related impacts, such as sea-level rise and stronger storms, said economist Anil Markandya, one of the report's authors.

“Unless we change the architecture of our energy sector, we might as well forget development under the SDGs,” Trotz said.

Funding that change would require international support, such as from the new Green Climate Fund (GCF), he added.

Andrea Ledward, head of climate and environment for Britain's Department of International Development and a GCF board member, told a launch event for the report there is a need to “break down the firewall” between funding for climate and development projects because the two areas are so closely tied.

Rich nations have committed to mobilise by 2020 an annual $100 billion in climate finance that is “new and additional” to existing funding.

Jonathan Reeves of the International Institute for Environment and Development said that while climate and development funding streams could be merged, the accounting must be kept separate to ensure the money is “new and additional”.

He warned that the least-developed countries have the most to lose if efforts to address climate change fail.

“If your country is going to be submerged within a couple of generations by sea-level rise, you're not even going to be thinking about achieving the SDGs,” he said.

Ilmi Granoff, a researcher with the Overseas Development Institute in London, said public support for an ambitious climate deal and strong sustainable development targets could be won by focusing on a new, understandable aim for all countries: “zero poverty and zero emissions within a generation”. (Reporting by Laurie Goering; editing by Megan Rowling) More