Record carbon dioxide (CO2) concentrations in the atmosphere were reported worldwide in March, in what scientists said marked a significant milestone for global warming. 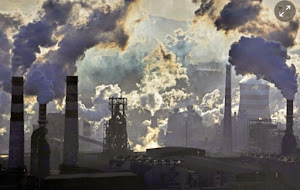 Figures released by the US science agency Noaa on Wednesday show that for the first time since records began, the parts per million (ppm) of CO2 in the atmosphere were over 400 globally for a month.

The measure is the key indicator of the amount of planet-warming gases man is putting into the atmosphere at record rates, and the current concentrations are unprecedented in millions of years.

The new global record follows the breaking of the 400ppm CO2 threshold in some local areas in 2012 and 2013, and comes nearly three decades after what is considered the ‘safe’ level of 350ppm was passed.

“This marks the fact that humans burning fossil fuels have caused global carbon dioxide concentrations to rise more than 120ppm since pre-industrial times,” added Tans. “Half of that rise has occurred since 1980.”

World leaders are due to meet in Paris for a UN climate summit later this year in an attempt to reach agreement on cutting countries’ carbon emissions to avoid dangerous global warming.

Dr Ed Hawkins, a climate scientist at the University of Reading told the Guardian: “This event is a milestone on a road to unprecedented climate change for the human race. The last time the Earth had this much carbon dioxide in the atmosphere was more than a million years ago, when modern humans hadn’t even evolved yet.

“Reaching 400ppm doesn’t mean much in itself, but the steady increase in atmospheric greenhouse gases should serve as a stark reminder of the task facing politicians as they sit down in Paris later this year.”

Greenhouse gas emissions from power plants stalled for the first time last year without the influence of a strict economic recession, according to the International Energy Agency, an influential thinktank.

Nick Nuttall, a spokesman for the UN Framework Convention on Climate Change (UNFCCC) which oversees the international climate negotiations, said: “These numbers underline the urgency of nations delivering a decisive new universal agreement in Paris in December – one that marks a serious and significant departure from the past.

“The agreement and the decisions surrounding it needs to be a long term development plan providing the policies, pathways and finance for triggering a peaking of global emissions in 10 years’ time followed by a deep, decarbonisation of the global economy by the second half of the century.”

But even if manmade emissions were dramatically cut much deeper than most countries are planning, the concentrations of CO2 in the atmosphere would only stabilise, not fall, scientists said.

James Butler, director of Noaa’s global monitoring division, said: “Elimination of about 80% of fossil fuel emissions would essentially stop the rise in carbon dioxide in the atmosphere, but concentrations of carbon dioxide would not start decreasing until even further reductions are made and then it would only do so slowly.”

Concentrations of CO2 were at 400.83ppm in March compared to 398.10ppm in March 2014, the preliminary Noaa data showed. They are are expected to stay above 400pm during May, when levels peak because of CO2 being taken up by plants growing in the northern hemisphere.

Noaa used air samples taken from 40 sites worldwide, and analysed them at its centre in Boulder, Colorado. The agency added that the average growth rate in concentrations was 2.25ppm per year from 2012-2014, the highest ever recorded for three consecutive years. More